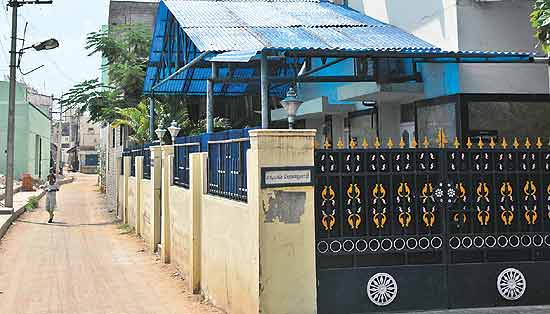 In Arakkonam, Justice Dinakaran’s hometown, his father, Paul Ponnuswamy, is remembered as a drawing and physical training teacher at the now defunct Hindu High School, not as a landlord. They were originally from Varathur village and lived on a rented property till Ponnuswamy constructed a small house around 1973. This house has now been redone and is perhaps the only one with an air-conditioner in the neighbourhood.

In the ’70s and ’80s, the house stood next to a cinema hall and the lane leading to it was congested, as it is today. Ponnuswamy’s family, the townspeople recall, was quite big: four boys and one girl, and they also had the two spinster sisters of the judge’s mother living with them. Daniel Dinakaran Premkumar, as the judge was then known, went to the csi elementary school and then St Andrews High School in town before joining Pachiyappa College in a nearby town for his pre-university course. Later, he graduated in chemistry from Madras Christian College before going on to a degree from the Madras Law College.

Around 1976, he joined the office of lawyers Rathan & Jacob as a junior. Two years later, he joined N.R. Chandran, an additional government pleader. It is in Chandran’s office that he learnt the ropes of the profession and began to take an interest in cases pertaining to school and service matters. After quitting Chandran’s office, he has been essentially on his own. He never practised in Arakkonam itself, but in the late ’70s and early ’80s he was known to catch the Jolarpettai Express around 7 am daily with a few of his friends to reach Madras for work.

A friend of the family said Justice Dinakaran married Dr Vinodini in 1981 at the Seventh Day Adventist Church in Aravankadu, near Ooty. The friend also conveyed to Outlook that Dinakaran’s father-in-law was a retired security personnel and did not seem to possess vast tracts of land.