Grounds Beneath Their Feet

Our bruised cricketers jump into T20; the BCCI must preserve them for national duty 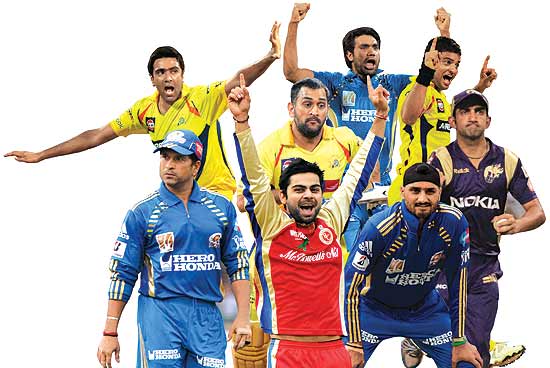 On the disastrous tour of England, captain M.S. Dhoni seemed like a general at the head of an army of hapless stragglers, hobbled by injuries, that slowly melted away. He himself played with aching fingers, wincing every time he collected the ball. One by one, ten Indian players got injured, including those who win games for India most often—Zaheer Khan, Virender Sehwag, Tendulkar, Gautam Gambhir, Ishant Sharma. It seemed unreal.

But we now have a stern-comic Shahrukh Khan telling us on TV that the actual show is coming only now—“ab hoga asli muqabala”—for the Champions League T20 is here. And how have the main men risen to the call! Having received the soundest thrashing of their careers, having picked up injuries after playing almost non-stop cricket right from late last year, several Indian players are back for the “asli muqabala”.

Of those injured in England, Tendulkar is unlikely to play, though they’re using his famous visage to promote the tournament; Gambhir will not play in the initial, qualifying round. But Harbhajan Singh will play, as will Dhoni. Others who were part of the wreckage in England, but are likely to pick up the pieces and soldier on in the Champions League are R. Ashwin, Suresh Raina, Wriddhiman Saha and Virat Kohli. Many played with injuries in the IPL. The injuries are so severe now that they’re unable to play at all. But if they’d not got injured—if Munaf Patel, for instance, had not been carried off the field on a stretcher in England—they would have played in the Champions League, despite the crushing physical and mental fatigue. The IPL and Champions League seem to have complicated the life of the Indian cricketer.

One man’s life has been thrown into a fierce tangle, courtesy BCCI bosses. As the new BCCI president, N. Srinivasan might be tempted to rest the clearly overworked Dhoni; as Chennai Super Kings owner, in a tournament built around hype and marketing, he can’t afford to do that—Dhoni is a crowd-puller whose participation translates into higher profit. The Champions League is marketed at Indian fans but they, in its earlier editions, didn’t seem to care much for foreign teams. This makes the presence of Indian teams vital—so their number is up to three (Chennai, Mumbai and Bangalore) with a possibility of a fourth if Kolkata qualifies. No other country has as many teams.

The new BCCI chief, N. Srinivasan, has an interest in seeing Dhoni’s Chennai Super Kings do well, being its owner.

Srinivasan says that players must decide when they’re tired or injured. But players daren’t say no to IPL club bosses, who are also their biggest paymasters. Shouldn’t the Indian players have rested before the tours of West Indies and England, in the national team’s interest? They should have, but it isn’t easy to say no to money. “We are making over Rs 10 crore over three years for playing in the IPL for a few days,” a senior Indian player tells Outlook. “But when we play for India, we make Rs 3-4 crore a year. This is why the IPL is important for us.” The IPL has become a competitor to Tests, making players richer but diminishing their passion for the longer format, demanding their time, loyalty and commitment to a club in a measure equal to what had been reserved for the country. Non-stop cricket through the year, because of the proliferation of T20 tournaments, tires and injures players and ruins their technique.

One way to resolve this problem is to make Test cricket monetarily more attractive; the other is to deny a player the right to decide on resting himself or judging his own fitness. The BCCI imposes restrictions on its players in general—including freedom to speak their mind. Why does it then allow them to evaluate their injuries or decide when to take a break? Isn’t it worried that its precious assets, the players, damage their bodies and their careers with too much cricket?

“We need to look at how the English Cricket Board or Cricket Australia handle overworked players,” says Kiran More, former player and selector. “There’s a limit to how much a player can play without getting injured.”

England puts country above club or county. The national coach decides when a player needs to skip a county game if it comes in the way of preparing for an England match. “So if, say, coach Andy Flower decides that Swann should not be playing a game for his county in the interests of preparing for England, he can make that happen,” says Lawrence Booth, editor of Wisden Almanack. The man who conceptualised this is now India’s coach—Duncan Fletcher.

As India slid to No. 3 in Tests and No. 5 in odi rankings, it’s incumbent on the BCCI to look ahead, like Cricket Australia did by commissioning Don Argus to look into the problems within. Last month they made changes in their management, coaching and selection structure to try to reclaim their No. 1 Test position. “Don’t miss the last line in the Argus Review recommendation,” commentator-columnist Sanjay Manjrekar says. That particular line says that CA should be “carefully assessing Big Bash League (Australia’s IPL equivalent) private ownership implications to ensure private ownership does not incentivise BBL expansion in a way that could compromise Australia’s goal to be the No. 1-ranked Test nation.”

The point about private ownership is relevant for India too; the BCCI must take a relook at the IPL and Champions League, which have swallowed the Indian off-season. Says veteran cricket writer Makarand Waingankar, “Teams across the world are playing more cricket, but the real difference is that top Indian players are playing 14 T20 matches in April-May every year, and that’s a killing schedule, when you consider all the travel too.”

Will the BCCI, like the ECB, allow Fletcher to cut down on irrelevant cricket? Not likely, sadly. “It’s business first and foremost for the BCCI, and cricket is long down the list,” says Booth. “What’s the BCCI going to do when their top officials personally stand to gain from the IPL and more Twenty20 cricket?” The answer is easy to figure—no one says no to money, and certainly not the new boss of a non-commercial “society” meant to promote cricket, and who’s the big daddy of the conflict of interest in Indian cricket.