The Inside Story from Tashkent and Peshawar. The enduring challenges -- military, politcal and diplomatic imperatives forcing the US back on its vow to wage full scale war. 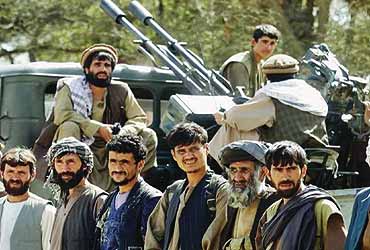 But military sources in Tashkent say American planes have indeed landed in Uzbekistan. It wouldn't be off the mark to say these planes are in southern Uzbekistan, near Termez, the town bordering war-ravaged Afghanistan. Not known though are the details—exactly how many there are, their model and the equipment on board.

In the last three weeks, ever since the twin towers of the World Trade Center came crashing down, the Northern Alliance in north and northwestern Afghanistan has made rapid progress, bolstered by new international support and deftly exploiting the demoralisation that has undermined the distracted Taliban. Also coming as a boost is the scotching of rumours that the ferocious Northern Alliance commander, Abdur Rashid Dostum, had been assassinated.