The Indian juggernaut rolls on, now with a rare win over Pakistan More Coverage 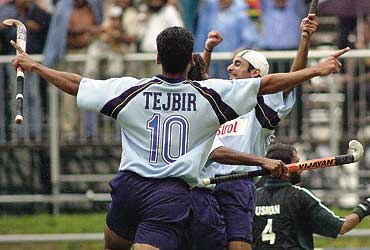 outlookindia.com
-0001-11-30T00:00:00+0553
Never mind what they say: inanities like "It's just another match", or "We will play our best". The fact remains that an India-Pakistan match, no matter what the sport, is a special and emotional moment for every sportsman on either side of the border. A win is to be cherished lifelong and a defeat, like a nightmare, can never be expunged from consciousness. Chetan Sharma will live with the memory of having been smacked for a last-ball six by Javed Miandad in Sharjah in 1986; and goalkeeper Mir Ranjan Negi will, for the rest of his life, cringe everytime the 1-7 loss in the 1982 Asian Games hockey final is mentioned.

Yet, the arch-rivals share an amazing relationship off the hockey field. Dhanraj Pillay, 35, considers Sohail Abbas as one of his good friends, but once they take the field they are bitter rivals for those 70 minutes. Former India captain Pargat Singh and Pillay still rate India's 5-2 win over Pakistan at the 1995 South Asian Games as one of the high points of their career. Pillay can now add one more to the list after Wednesday's 3-2 win over Pakistan in the Champions Trophy, Cologne, Germany. The veteran centre-forward played one of his finest matches, and also sent a message to the Indian Hockey Federation mandarins that at 35 he's still the best in the business, notwithstanding youthful stars like Jugraj Singh and Prabhjot Singh from the junior World Cup-winning team.

The temperamental Pillay, captain of the winning Indian team at the 1998 Asiad, has been humiliated in the past. He was forced to eat humble pie by a careless officialdom, which did not bat an eyelid before rapping him on the knuckles for demanding a better deal for himself and fellow players. He was "rested" within weeks of leading the team to a gold medal and then forced to sit out. That he was eventually taken back into the team fold is a testimony to his talent and fighting spirit.

India, who returned to the tournament after a gap of six years, might end up with their best-ever result in the trophy. At the time of going to the press, after four matches, they lie joint second on points, but a host of problems still beset national hockey. It has a federation that cares little for players; changes coaches and players at its own whim and fancy. There is very little planning and a lot of insecurity among players. Strategy and planning may as well be incomprehensible Greek words for the callous officialdom.

Is it any wonder, then, that players are often found wanting in the last ten minutes or so. They lose concentration just before the break or the finish; and take some time to warm up at the start or after resumption. Those crucial minutes often spell disaster as they did against Germany or Holland, who struck in the dying minutes of the match. Germany converted a 2-2 draw into a 3-2 win, and Holland converted a 2-3 loss into a 3-3 draw in a matter of few seconds. And India had lost three valuable points which could have a bearing on its final standing.

The Indian defence gives away too many soft penalty corners, and then often finds it difficult to defend them. Not only because they have taken their minds off the match, but also because they have not been tutored to look for tell-tale patterns in the way the opposition takes its set-pieces. Germany repeatedly adopted the same variation and yet India failed to adapt itself to it.

Yes, India may not win the elite six-team Champions Trophy and we cannot gloss over the inadequacies of the team itself. But for now, rejoice India's win over Pakistan. And the rest be damned.

The End of Pride Begins