The J&K poll results gives the indolent party, post-Akshardham, a shot in the arm 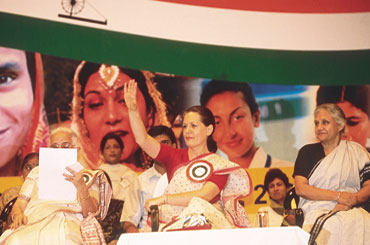 outlookindia.com
-0001-11-30T00:00:00+0553
If it's a question of the Congress' morale, the Jammu and Kashmir election results couldn't have come at a better time. After the terrorist strike on the Akshardham complex and the predicted polarisation of the Hindu vote, the Congress claim that it would emerge victorious in Gujarat suddenly sounded hollow. The party appeared to have receded into a shell, even as Narendra Modi repeatedly raked up the "Sonia-is-a-foreigner" issue during his gaurav yatra. Privately, Congress leaders admitted that gloom had indeed afflicted the workers.

But suddenly, the good showing by the party in Jammu and Kashmir came as a tonic. While the Congress was expected to better its 1996 performance, no one expected it to win 20 seats, that too 15 in Hindu-dominated Jammu. Equally comforting for the party was the fact that the BJP was literally wiped out in its old stronghold, winning just one seat in Jammu.

The rejection of the BJP by the Jammu voters is being interpreted by Congress strategists as an anti-incumbency vote against the BJP at the Centre. They also see it as proof that the Hindu card does not always reap dividends: if the Jammu voter could turn down the BJP, then there is every reason to hope that the communal card may fail in Gujarat as well.

Bolstered by its success in Jammu, Congress strategists are now reviewing the party's prospects in Gujarat. Says CWC member Salman Khursheed: "The hold over majority sentiment is not the monopoly of the BJP as has been established in Jammu. This will have a cascading effect in Gujarat as well." Congress leaders are also quick to spin the Jammu victory as a vote against the divisive politics of the BJP. Points out Congress MP Mani Shankar Aiyer: "The battle for Gujarat is between India and the BJP. Between our concept of secular India and the BJP's concept of Moditva! And I have no doubt that we will win."

So enthused are Congressmen that they have even coined a new slogan: "Jammu Kashmir hai hamari (sic), ab hai Gujarat ki baari (J&K is ours. Now it's Gujarat's turn to go our way)." Says CWC member Natwar Singh: "Regardless of who forms the government in Srinagar, the Kashmir results will have a favourable impact in Gujarat. There is a change in the Congress morale. Our image is looking up."

Loyal as ever, Congressmen have been quick to attribute the victory to Sonia. They point to her election rally in Srinagar, a place which none from the BJP's top leadership dared visit. Partymen recall how she was instrumental in setting up a special core committee to oversee the elections. "It was this kind of special interest shown by her that boosted the morale of the state party cadre," says a party general secretary.

But selective amnesia seems to be at work among Congressmen. No one wants to admit that state unit chief Ghulam Nabi Azad was packed off to J&K on a punishment posting. This, after he failed to revive the party's fortunes in the Uttar Pradesh assembly elections earlier this year. His transfer to the insurgency-struck state is now being cited by 10, Janpath spin doctors as "Sonia's masterstroke".

Clearly, the Congress feels that the recent victory will have what party spokesman Jaipal Reddy calls a "domino effect in the rest of the country". It has also further bolstered the party's argument that regardless of the relentless tirade against Sonia's foreign origins, she can still swing the votes. That is one reason why Congressmen are so keen to attribute the J&K victory to their national president rather than to Ghulam Nabi Azad. In fact, soon after the results came out, Congress leaders were on TV praising Sonia's leadership. It was only at the CWC meeting, called by Sonia 48 hours after the results came in, that a resolution was passed taking note of Azad's role.

Of course, it can be argued that the J&K result wasn't a pro-Congress vote but an angry electorate voting out a discredited incumbent. Also, given the factionalism in the saffron brigade, the Congress had a weakened BJP to contend with. But as any Congressmen will tell you, a victory is a victory. "It's like a cricket match. At the end of the day the better team wins," is how one leader puts it.

The big question, however, is whether Gujarat will turn out to be as lucky for the Congress as J&K.

The Beatification Of Big B