The board dithers over harsh punishment for erring cricketers, worried that it could boomerang 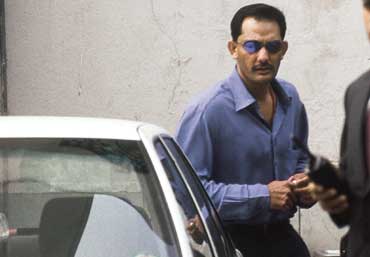 outlookindia.com
-0001-11-30T00:00:00+0553
Veiled threats, blackmail and courtroom battles have led to the deferring of a final verdict on the cricketers named in the cbi report and then certified by the bcci vigilance commissioner, K. Madhavan.
But the decision to toss the ball back to the disciplinary committee to adjudicate on the quantum of punishment has raised many eyebrows. Chennai is now become the hotspot where the three-member committee comprising bcci president A.C. Muthiah and vice-presidents Kamal Morarka and Ram Prasad are deliberating, hopefully for the last time. Buffeted from all sides, the bcci has left the matter hanging, giving the tainted players time and room to manoeuvre.
Officials, both from outside and within the bcci, told Outlook that two cicketers, Mohammed Azharuddin and Ajay Jadeja, could prise open another scam which could shake the very foundation of the bcci, if punishment given to them was maximum.
That a life ban awaits Azharuddin, who has admitted to have "done" three one-dayers, seems certain. This was supported by 28 of the 30 board affiliates at Calcutta. The only two exceptions were the Hyderabad Cricket Association (hca), Azharuddin's home unit, and former bcci chief Raj Singh Dungarpur. "If Azharuddin goes down, he will take many others in the cricket establishment with him," one official told Outlook. Sources pointed out that Azhar had "juicy" details on at least two board officials, including treasurer K.P. Rungta and former International Cricket Council (icc) president Jagmohan Dalmiya. "Details of their activities which have had a bearing on the game may become public," says an official.
At the recent meeting of the disciplinary committee in the capital on November 28, some close associates of Azharuddin had ensured that these sentiments reach the right quarters. Ever since the cbi report became public, Azharuddin has kept a stony silence, refusing to talk about the allegations against him. "We only know that he denied all the charges against him before the board's own internal enquiry and disciplinary committee," says an official. "He might come out openly if a life ban is imposed," the official adds. Many expected the special general body meeting of the bcci on November 29 in Calcutta to finally bring the curtains down on the scandal. "Punishment, we thought, would be swift and decisive which was imperative," says a board official. But this was not so.
While Jadeja has adopted a multi-pronged attack, using "friends in the government", (see box) to salvage his name, he too, says the cbi, could open another Pandora's box. In their reckoning, he has enough ammo on the board's mandarins which he has kept close to his chest. "Who knows...that can come out if the punishment is tough on him," says a senior officer. Officials probing the scandal maintain that only 40 per cent of the truth is out till now.
That the board members are under tremendous pressure to go soft on Jadeja is well known. But whether it succumbs eventually remains to be seen. Soon after the Calcutta conclave, Muthiah said: " I am not trying to protect anyone. None of us is trying to even delay the process, everyone is in favour of delivering the penalty at the earliest."

However, Muthiah's actions betray his brave words. He is slowly seeing reason in Dungarpur's assertion that "weightage must be given to the achievements of the Azhars and Jadejas" before delivering the verdict. This obviously is the first sign of yielding to pressure and a clear indication that the board may not yet be prepared to initiate harsh measures against those indicted in the cbi report.Incidentally, Jadeja is also Dungarpur's distant relative.
Significantly, while the maximum punishment in the bcci's new code of conduct (which came into being on October 1) for match-fixing/contact with bookies is life ban/ban for five years, an exception is being sought to be made for Jadeja. In fact, board members were also talking of the possibility of a three-year or even a year's ban for him. "That might go through another radical change if the pressure works in Chennai," says an official.
Among the five cricketers, Jadeja is the only one who has a realistic chance of playing international cricket again. But even if he gets a reprieve and is banned for a year, he is unlikely to play for India again. "It is difficult to bounce back after a long gap. By then the selectors and the team management may have a different agenda," said an official.
The likelihood of the guilty players approaching the courts is also a cause for worry. Some bcci officials feel that everything possible must be done to "protect the board" in case more skeletons are laid bare. Though Muthiah maintained a defiant stand, saying "we will fight in the court", board officials were unsure whether this litigation could result in more "filth" emerging from their dirty cupboards.
But for now, the disciplinary committee will be bogged by these nagging and worrying thoughts when it sits to ponder the fate of the five cricketers. With the probe having got maximum publicity and an eager Save Cricket public keenly watching the proceedings, only hard decisions are expected. Anything less could only spark more trouble.