In the 'cosmopolis', a militant vegetarianism is a cloak for exclusion. How long before other schisms recur? 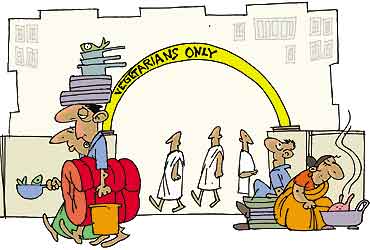 These days, at the north end of Mumbai's Marine Drive, or 'Queen's Necklace', strings of fairy lights form a narrow, uphill gateway to veggie land. This millionaires' row features everything from sea-facing bungalows to Jain Mexican food and other slight eccentricities of the rich. The fairy lights are up, though, because one of the many temples on the street is celebrating another festival.

But it may well be because the restaurant-starved area finally has two openings this month. Mika's, which opens this week, features a full-scale menu with food from around the world, except it's all vegetarian and packed with Jain options. Mikyle Moloobhai, the Muslim owner says, "No point opening any other kind of place here. It will only hurt sentiments."

Mika's, like most local establishments, is fixed in a Jain building surrounded by temples including one in its backyard. The other new restaurant is also vegetarian, and also faces a temple. In fact, most buildings here have temples in their compounds, many apartments are available only to vegetarians (many only to people of certain communities). Restaurants and shops in the area serve and store an astounding array of food—but all vegetarian.

An SC ruling last month said such community-based housing societies can continue to enjoy the benefits they have, vindicating the city's increasingly religion-based lifestyles. Across the city, apartments, restaurants, grocery shops etc mark localities as meant for one kind of people or another. While those who fit in say enclaves are great because they live with "like-minded people", others say even before the ruling, economics had created a mosaic of areas available to some and not to others. Increasingly, India's most cosmopolitan city is 'ghettoising' people—the area reflects your beliefs.

Housing societies anywhere in the world can impose restrictive rules (on pets, for instance). And essentially, a private (read, not 'governmental') society can have rules or by-laws that appear discriminatory to outsiders—even though the Indian Constitution (as in Articles 14-16, for instance) specifically disallows discrimination. But now, armed with the SC judgement, a private building society can technically limit sale or rent of flats to a single community, faith etc. In practice, Mumbai has long seen an informal system of exclusion of assorted communities. The court ruling only vindicates this.

"Well-healed and vegetarian may sound like an unusual combination," says food critic Rashmi Uday Singh, but Malabar Hill's vegetarians dominate the city's diamond business and stock market. So catering to the vegetarian market is booming business in Mumbai. Last week, Rashmi released a lavish coffee-tabler with veggie recipes from across the world. Even Moloobhai and others aren't complaining. They have some of the city's wealthiest and influential citizens as clients.

Restaurants had stopped coming to veggie heartland a few years ago after a property almost rented out to an Italian restaurant was forced out by a Jain association. Then a popular Indian foodchain was driven away by morchas, police complaints and other less polite means. It allegedly hurt sentiments by serving non-vegetarian food in a building meant for Jains and, sacrilege, housed a temple of theirs.

Now, the area and the adjoining Marine Drive have one of only a few vegetarian Pizza Huts in the world, as also one of the few vegetarian Coffee Day outlets. Meanwhile, Anantashram, a restaurant as well-known for its seafood as for its spartan settings and taciturn staff, has said it's downing shutters in the next few months because it was surrounded by a vegetarian enclave. A development certain to send many of the city's foodies (some much afield) into bleak mourning.

In any case, it isn't just restaurants that get the Malabar Hill treatment. Across the city, moneyed Gujaratis, Marwaris and Jains drive the housing and restaurant business and are forcing an unusual code of service. Dr Anish Desai probably considers himself a victim. He's been trying to move from Borivli to the rather fancier Ville Parle for a few months now, but has abandoned his search for upward mobility. Desai's real estate agents told him getting a house there would be hard. "They told me I had two problems. One, I am a Maharashtrian and two, I'm non-vegetarian. These buildings are meant for Gujaratis, Jains or Marwaris...and for vegetarians only." Desai also tried looking for a house in Kandivli's temple and the Jain-dominated Thakur complex before settling back on a Borivli house. The issue has also brought the irrepressible Shiv Sena into action. Columnist Pramod Navalkar has been waging a long campaign against the city's rising vegetarianism. "The SC ruling only talks about housing societies formed by individuals of a certain caste or profession and have been there for a long time. It does not allow developers and builders to deny housing on the basis of vegetarian or caste," he argues.

But in a city where even mood swings depend on the stock market and bottomlines, the need to appeal to high-end buyers is only increasing. Many of the posh new buildings in south Bombay are open only to vegetarians. Although several developers deny it, estate agents prefer to take only vegetarian clients—and of some communities—to these buildings. How do they know? "I try in indirect ways—ask clients what their caste is, food preferences and so on—so that they can be matched to a building of their choice," says Jitu Parekh, an agent in Malad. He asks clients their surnames, checks their accent and asks them what they eat. Though Parekh is a non-vegetarian Gujarati, he will not be able to work with a building again if he makes a wrong match. Most agents have a clear pecking order of what kind of clients they want, and Muslims feature right at the bottom. So agents either do not take them on or redirect them to Muslim buildings where rates are typically lower.

Most developers and agents won't openly admit it, but all this has a clear payoff for them. "If a building is vegetarian, and especially if it has a Jain temple in it, Jains and vegetarians could pay a premium of up to 20-25 per cent for it," says Chetan Narain, director of Narains, a property consulting company. "In south Mumbai, there is less supply and more demand. So some people, in this case non-vegetarians, sometimes do not get the houses they want."

After Desai moved in to his Borivli home, he also fought off a resolution in his housing society to make it vegetarian. In a city that increasingly defines itself as vegetarian or not, of some caste or not, some religion or not, the court ruling only highlights the very thin line between a desire to share one's space with "like-minded" people and discrimination—and how little a house hunter with the wrong surname or dietary habits can really do about it.

When I Was A Film Critic...