Our biodiversity, thriving so far despite the depredations, is a fragile gift we hold in trust 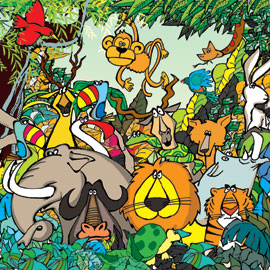 India can still surprise us—and for the better. We have all heard this statistic time and again: one in six humans in the world lives in India. But there’s also an array of plants and animals, reptiles and fishes that shares with us our living space. This is a cause for both celebration and concern. Can we retain this irreplaceable wealth of nature even as we aspire for a better future for our human selves?

It’s not just our human population—with its plurality of faiths, languages and ethnic groups—that expresses India’s spectacular fecundity and diversity. We are the only country to have lions in the wild as well as tigers: they exist in nature, not in captivity. The snow leopard, that ghostly phantom of the mountain peaks photographed first in the mid-1970s, is found across five Himalayan provinces. To these add myriad forms of fish and amphibians, and only the second monkey species to have been recorded by scientists in Asia in a century—the Arunachal macaque. That’s just a small sample of the abundance of life forms in a country occupying just over two per cent of the earth’s land mass.

The preservationist approach of the past must give way to a green alliance between science, community, citizen.

Most of us notice only the number on the ten-rupee note, but look closely and you will see images of the one-horned rhino, the tiger and the elephant. This epigram of large vertebrates our land is famed for is also, of course, an epitaph of sorts. The Asiatic lions of Gir are the last remnant of the prides that once ranged westward till Palestine. Just over five centuries ago, Babar hunted the rhino in the Indus basin; today, rhinos are found only in a few reserves in Assam and West Bengal. The elephant’s range has shrunk remarkably; it is amazing to think now that Jahangir mounted six-elephant hunting expeditions in, of all places, south Gujarat.

The expansion of human-dominated spaces has often pushed nature back. One in five domestic ungulates in the world—cows, buffaloes, mules, donkeys, camels and horses—also live here. Half the land is under the plough.

Yet, though much is taken, much abides. The cheetah may have vanished, but it is the only large vertebrate to die out in India since 1947. Look at the countries that border us and the magnitude of the Indian achievement becomes apparent. The tiger is near extinct in China and a rarity in much of east Asia. The big cat with stripes is a mere memory in Iran, Pakistan and ex-Soviet Central Asia.

There is a vision underlying these achievements. Within a month of the assassination of Gandhi, and amid all the clamour of new nationhood, prime minister Jawaharlal Nehru wrote to the administrator of the state of Junagadh, instructing him to save the lions of Gir, under threat from trigger-happy shikaris. A few years later, he intervened to safeguard the wetlands of Bharatpur’s Keoladeo Ghana, home to a quarter of a million waterfowl every winter. They were the target of ire of the peasantry and Dalits. Both needed land: it was eventually found elsewhere and the Ghana survived.

Of course, the drive to ensure economic expansion for the new nation led to giant dipterocarp trees being carved up into plywood. Bamboo disappeared into mills to emerge as paper. Dams generated energy and watered fields but swallowed up splendid forests, as in Tungabhadra, Karnataka. But the 1960s were a turning point, in that saving nature became an enterprise of patriotism, and the credit for that largely, though not wholly, goes to Indira Gandhi. She used campaigns like Project Tiger to propagate the notion that nature had intrinsic worth not measurable in mere rupees or dollars.

The idea of ecological patriotism was celebrated best by the doyen of black & white wild animal photography and naturalist par excellence, M. Krishnan. He likened the setting aside of reserves, where nature’s way would run its course, to the protection of a country’s cultural or architectural heritage. The tiger became an emblem of a larger sense of respect for the natural world, for flora as much as fauna. It was also the symbol of the larger task of ecological renewal, with successive droughts in 1966 and 1967 having driven home the importance of protecting the green mantle as an insurance against natural calamities.

Steam-roller majorities helped Indira, and later Rajiv Gandhi, push through their conservationist impulses. But it is worth noting that even their opponents, like the Janata Party government that came to power in 1977, did not undo their work. No less a person than Babu Jagjivan Ram, Indira’s ally-turned-opponent, inaugurated the International Symposium on the Tiger held in the capital in 1978. Morarji Desai put an end to the export of monkeys, two million of which had been sent off for laboratory tests in the US.

Thanks to this continuity of vision, as we entered the new millennium, close to five per cent of the land and waterscape had been set aside as sanctuary or park. Given that one in two children are malnourished, it requires great vision to set any land or water body aside. But conservation is not merely about denial; it’s about discovering a balance. Nowhere was this more starkly evident than in the case of Silent Valley, still a cause celebre for those who see big dams denuding forests as anathema. Yet here, the Union government was cautious. The project was reviewed and rejected and the energy and irrigation water it promised to north Kerala were obtained via wiser, better means.

Does any of this matter to the India of 2009? At first glance, it does not. This is a different place—the polity is more fragmented, the country much richer. Since the 1980s, we have bucked the infamous Hindu rate of growth. Yet, the experiences of the past do matter, and more than a bit, as we try to combine growth with ecological sanity in the new century.

The vast majority of a billion-plus Indians see industry and urbanism as better than what it replaces. But there is little doubt that the costs of achieving this are not shared equally. Not only will a genetic storehouse of great variety go to seed before it has even been studied, let alone tapped, this process can also imperil existing livelihoods of those directly reliant on the wealth of the land.

In dealing with the dilemmas and choices of the future, the approach of the preservation era of the 1960-70s will have to be transcended rather than simply celebrated. That approach was marked by an over-reliance on bureaucracy and often a throttling of science. Though India was the scene of pioneering research on the deer and the tiger by George Schaller, as early as 1964-67, science later came to be shut out by the bureaucracy.

Centralism has to give way to more power downwards to states and then to local communities. An alliance has to be forged between science, community and citizen. In that context, environment minister Jairam Ramesh’s recent admission in Parliament that previous tiger estimates were unsound and the best in science was yet to be pressed into service came not a day too soon.

A host of other initiatives show a society capable of safeguarding nature, despite widespread depredation and abuse. For instance, the Mysore-based Nature Conservation Foundation has done a commendable job of restoring the forests in abandoned tea estates in southern Tamil Nadu. Wildlife First!, another voluntary group, has worked to stop iron ore mines in a Karnataka reserve that destroyed the livelihood of farmers downstream. In Assam, scientists work with tea planters and the Durrel Wildlife Trust to breed and reintroduce a small member of the pig family, the imperilled pygmy hog. Across Orissa, village forest protection committees have enabled renewal of forest cover while forestalling mining.

Celebrating India’s ecological diversity also calls for knowing where to go next. Plurality calls for synthesis of different approaches. Only then will the next 60 years avoid the blunders of the past and ensure a better future.

(The author, a professor of history at the University of Delhi, is an environmental historian.)

Prejudice In The Ether