Greatest? Or The Only? 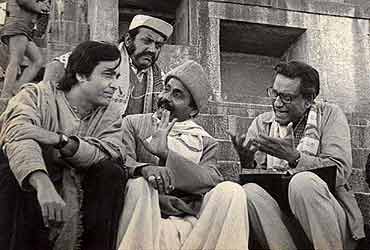 outlookindia.com
-0001-11-30T00:00:00+0553
There is only a slight shift between Satyajit Ray, influential member of a generation of artists that transformed the post-independence modernist landscape, and Ray the genius, lonely in his solitary greatness. Put one way, the impact of 30 years of experimenting with realism has been enormously generative: that impact is still being discussed. Put in another, Ray has been a millstone round the neck of Indian cinema.

When did things change? I believe it happened with the reception of his first film in the US: when a major transformation occurred in how Ray was viewed. I think the dominant nativist and Oriental poet was reimported into India, and transformed into an official state aesthetic during Indira Gandhi’s reign—the sort of cinema the Film Finance Corporation would hold up as exemplary. Ray himself was not too happy about this use of his cinema but I also do suspect that he eventually capitulated to this perception, and was reconciled to a profoundly unhelpful iconic greatness.

It was the "magic horse of poetry", as one European reviewer (Arturo Lanocito, quoted in Marie Seton’s biography) had it, which elaborated, astoundingly, by another to mean that "Ray sees life itself as basically good, no matter how bad it is" (Pauline Kael), and saw the construction of what I would describe as a ‘Ray movie’: a fabrication, a presumption that Ray, over 30 years, more or less made the same film over and over again. Yet another reviewer of the time said that "Ray’s genius is for the lyrical, for the contemplation of life as a blend of material and spiritual beauty" (Newsweek review of Ashani Sanket). Few recognised that these films were profoundly located, geographically or historically. An influential perception was that these films were "timeless and international... (their) story and characters applicable to any place on earth" (Art Film, Los Angeles). The fabricated Ray movie remained, independent of all the evidence, perennially black-and-white, middle-grey documenting with loving precision individual gesture and humanist concern, stories set in pre-1947 rural Bengal.

Ray did on occasion display unhappiness, even irritation, at this transformation. "I am fully aware," he said once, "thanks to my Western critics, of the Western traits in my films. They have been so often brought to my notice that I can actually name them: irony, understatement, humour, open-endings.... It’s not as if I find myself saying: Ah, now for a bit of British understatement. They are used intuitively to best serve the needs of the subject" (quoted by Roy Armes, Third World Filmmaking and the West).

And yet there it was: that millstone. It was ironic that the very time when Ray was making the savagely ironic Pratidwandi and Jana Aranya, the state was holding up an aesthetic derived from a fabricated ‘Ray movie’ conception. This, at a time when the Emergency imposed stringent censorship norms for independent filmmakers. The parliamentary panel to investigate into the Film Finance Corporation instructed that the ffc only fund films that demonstrate ‘(1) human interest in the story, (2) Indianness in theme, approach, (3) characters with whom the audience can identify and (4) dramatic content’. And the new propaganda machine made a notorious series called Film-20, to use realist arthouse shots not too different in style from Ray’s bizarre featurette Sadgati, to illustrate Indira Gandhi’s 20-Point Economic Programme.

By this time Ray’s international reputation had become something of a serious problem for a generation of younger filmmakers, not least because his often-publicised opinions could make or break careers. There weren’t too many younger filmmakers he liked anyway: Shyam Benegal was one whom he actively supported, and towards the late 1980s, Adoor Gopalakrishnan. The nativist turn—the ‘I am a Bengali and I make my films for a Bengali audience’—coupled with his global fame, was for all practical purposes a turn to the past rather than a perception of the future. When he died, as government flags were put on half-mast, it was the passing of an era over a century old, the last of the Bengali Renaissance. The end of something, whatever it was: an artist, who also made films, but profoundly from the past. As many, many younger filmmakers got on with their work with more than a tinge of relief.

(Ashish Rajadhyaksha is a senior fellow at Bangalore’s Centre for the Study of Culture and Society and the co-author of Encyclopedia of Indian Cinema.)