At Peepli’s ground zero, hope floats. Will the film better the lives of the villagers? 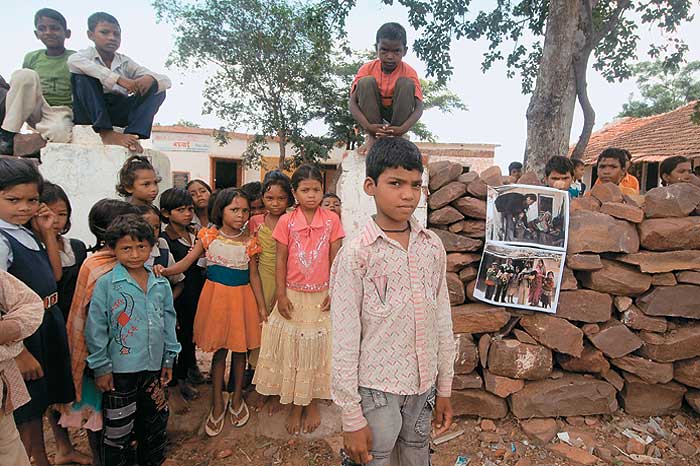 In the village chaupal, under the shade of a neem tree, the Prajapati Mandali spreads its dholak, manjeera, harmonium and treats us to a delightful, impromptu musical session. “Ghar ghar ghuso dahej ko bhoot; sazaa kyon beti paati hai (The ghost of dowry haunts every household, yet why is the daughter made to suffer?)...” fills the air. The eight-member group has several such irresistibly catchy, folk-inspired compositions in its repertoire—songs on education, family planning, superstition. Right now, of course, the band is in the news for its song, Mehngai Dayen. This heart-felt rant against inflation, narrated from the perspective of a poor farmer, features in Anusha Rizvi’s much-awaited debut film, Aamir Khan Productions’ Peepli [Live]. Having already caught the fancy of listeners in a big way, it’s topping the charts, and has even featured in a political controversy, with rumours that the BJP was very keen to use the song in its battle against the Congress, until Aamir said a firm no. 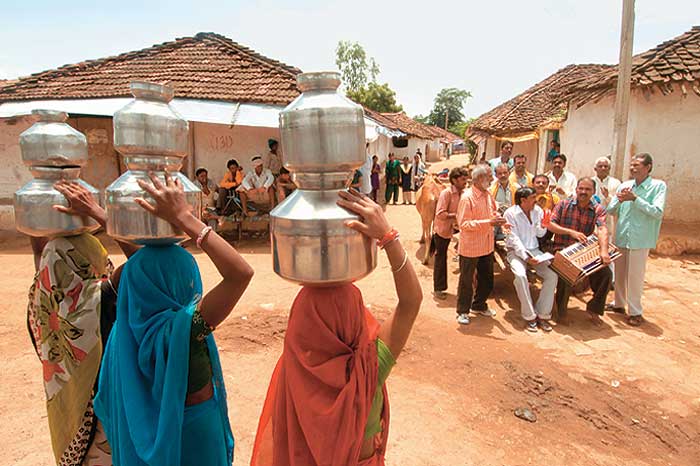 The Prajapati Mandali, topping charts with Mehngai Dayen, performing at the village (Photograph by Tribhuvan Tiwari)

The song has a serendipitous story behind it. While shooting in this village, Bhadwai (Peepli in the film), Anusha heard a rendition of Mehngai by the mandali and decided to feature it in her film. After that, life took a dramatic turn for the mandali, headed by village teacher and lyricist Gaya Prasad Prajapati. From being village singers (at the odd-religious event), they found themselves travelling all the way to Bombay for the music release function, singing for an audience of Bollywood biggies, staying in a hotel for the first time in their lives and partying till the wee hours. Do they want more? Of course. The mandali now dreams of cutting an album and its members are counting days till the film’s release on August 13, thinking of it almost as a talismanic date that will take them into a new life.

They are not the only ones dreaming. The entire village of Bhadwai, about 70 km from Bhopal, in Raisen district, is living off a dream called Peepli [Live]. The villagers, eagerly watching promos on TV and hearing the songs on FM, are hoping against hope that the film will do what the government and administration has not been able to do for them for generations—change their lives for the better. “We are hoping that once the village gets noticed in the film, growth and development will finally reach us,” says sarpanch Mishrilal.

Just hours away from Bhopal, Bhadwai has no access roads, no water taps and power plays truant all day.

For a long time, we have been mourning the disappearance of the village from mainstream Hindi films. There have been odd exceptions—Ashutosh Gowariker’s Swades was about an NRI’s journey back to his roots and Shyam Benegal’s Welcome to Sajjanpur and Well Done Abba were comic takes on contemporary rural societies. Peepli [Live] tries to get more raw and gritty while remaining sharply funny and tongue-in-cheek. The attempt is to create a village that can represent all Indian villages—their material backwardness, poverty and deprivation, their pains, but also their joys and quirky sense of humour. In many ways then, the setting itself becomes a character in the film, throbbing with life and individuality. A reason why it was essential for it to feel real despite being fictional and for the film to have been shot entirely in and around real Bhadwai than on some sets at Mumbai’s Film City. In her filmmakers’ note, Anusha states that she wanted to capture reality rather than create it. “The film had to grow outwards from the people and the village than being an imposition of an outsider’s vision,” she writes.

In many ways, Bhadwai is a living example of what Aamir has been pitching as the theme of the film—the urban-rural divide. The film’s focus is on an utterly poor farmer, Natha, who decides to commit suicide just so that his family can claim Rs 1 lakh compensation from the government.

Bhadwai shows similar deprivations and dilemmas. Just hours away from the state capital, Bhopal, there are no access roads, electricity plays truant for large parts of the day, and no taps for water to flow from (residents have not been able to fork out Rs 1,000, the installation charge). Higher education is a distant dream for most girls, literally so, because there is no school after class viii, for miles. As for medical aid, villager Kishenlal says with typical black humour: “If you are seriously ill, you go all the way to Bhopal and if you die on the way, you just take a U-turn back to Bhadwai.”

Despite these striking similarities to the film’s Peepli village, Bhadwai got the nod only after the unit’s location-hunters spent seven days traversing 35-odd villages surrounding Bhopal.

The cast and crew, staying in Bhopal, descended here everyday for about two months while the shoot was on. The narrow lane leading up to the village was widened and tarred to provide passage for heavy trucks and equipment into the village. The panchayat bhavan and school were turned into a hospital, one of the settings in the film. A dilapidated madrassa was restored to fill in as a base camp and makeshift bathrooms were built for the crew which are now being used by the villagers themselves.

Location manager Anoop Joshi remembers the shooting as a community experience in which the cast, crew and the village participated together. “It wasn’t about stars locking themselves up in their vanity vans but mingling with each other and the villagers,” says Joshi. Some, like Raghubir Yadav, used to sit by the Bhadwai pond for hours together. A man of the soil himself, he regularly ate with the villagers and sang along with the mandali.

The picturesque village, spread over 10 acres, looks even prettier in the monsoon. Fetchingly, its mud houses have bright blue doors. About 1,500 people live here, mostly farmers, labourers and daily-wage earners—both Hindu and Muslim. The house that was turned into Natha’s home is owned by Shahadat Khan. His 14-year-old daughter Shabana even bagged a small role in the film; the part of a child being interviewed by the media that descends on Peepli to “cover” Natha’s suicide. Shabana proudly displays her picture with Aamir, clicked that one and only night the star came to the village.

We catch Pawan, aka Golu, who plays one of Natha’s sons, a class VII student in the local school, who lives for his midday meal, especially the Saturday menu of poori, aloo tamatar subzi and kheer. “Every person and household here was involved some way or the other with the film,” says Joshi.

No extras were used and real villagers filled in instead. However, they were not aware of being integrated in the shots. To maintain the real tone and texture of the film, most lead actors, save a Naseeruddin Shah and Raghubir Yadav, are all acting in their first feature film. Indian theatre director Habib Tanvir’s Naya Theatre repertory, which comprises mainly  folk actors from Chhattisgarh, provided the main cast. The selections were made after an exhaustive audition process that lasted over four months in which over 600 actors were tried out. The chosen ones had to undergo a week-long workshop in Bombay. “The idea was to improvise situations and internalise our characters,” says Vishal O. Sharma, who plays journalist Kumar Deepak. Even a veteran like Raghubir had to go through the audition and workshop grind.

A film booklet in my hand evokes the curiosity of villagers. They crowd around to see the pictures and guide us through all the spots that figure in the film—the chaupal, the panchayat bhavan, the mandir. They tell us where the colourful ‘bhat-sooar’ (the local name for a 12-seater passenger tempo) and the white horse featured in the film were sourced from. All the helpfulness has a commercial edge to it too—they all want money to participate in our photo-shoot (no, we didn’t pay). “They are not innocent any more, they are thinking ahead,” says Joshi. Yet, they are still touchingly nostalgic about those two months when the film unit took over their village, and their lives. When there was more to look forward to than just the daily grind. “They built a road but it’s gone now after the rains,” says Kishanlal wistfully. But road or no road, they are all set to hire a bus to Bhopal to see themselves and their village in Talkies. First day, first show.