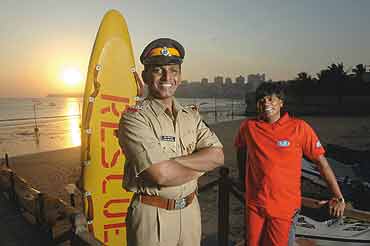 outlookindia.com
-0001-11-30T00:00:00+0553
Anil Tandel had never seen so much water, at least not where there was dry land just a few hours ago. The 28-year-old Koli lifeguard at H2O—a water-sports complex at Mumbai's Chowpatty beach—has been swimming in the ocean with his fisherman-father since he was five years old. But on July 26, '05, the day Mumbai was flooded like a sinking Noah's Ark, Tandel got off the fire brigade van that had sped him to the inundated suburb of Kalina—and knew he was staring at his greatest challenge yet.

Tandel and 34 teammates had been summoned to the beach midway through their dinners. Tandel rushed to H2O, even as his wife of two months urged him not to go. The rain showed no signs of stopping—what emergency required all the lifeguards to report back to work?

They knew nothing as they gathered up their things—an inflatable speed boat, two jet skis, rescue rings and tubes, and walkie-talkies—and mounted the fire-brigade van early that night. As the vehicle wove through traffic snarls and flooded bylanes, the lifeguards made silent guesses about where they were going and what they were being called upon to do.

They were way off the mark—nothing prepared them for what they saw. About 60,000 people were stranded in row upon row of BEST buses, as far as the eye could see. "Right before we got there, we were told about a school-tempo with children trapped inside," says Tandel. "But the tempo had sunk...the children had moved to the roof of a best bus."

On that terrible Tuesday, Mumbai's suburbs received 944 mm of rainfall over a 24-hour period, beating even a Cherrapunji record. Coupled with the high tide and the absence of any disaster management plan worth its name, the deluge brought Mumbai—a city otherwise accustomed to monsoonal vagaries—to its knees. Trains were shut down; buses went off the roads or stood in roof-high water; cars sunk; the power supply was out for days in the worst-hit areas; and thousands of commuters were stranded.

The low-lying area of Kalina, where Tandel was standing, was really in dire straits. The water had crept up past the windows of the buses. People were standing on the seats, straining to keep their heads above water. Others had clambered upon the roof and were screaming for help. It was pitch-dark, and the water raged like a river in spate.

Anyone would have expected a hero's welcome, but "instead of taaliyan, we got gaaliyan," laughs Tandel—abuse in place of applause. "The people mistook us for government servants and threw plastic bottles, even chappals at us. Each one wanted to be rescued first. They railed at us, hurled insults. Not even our mothers and sisters were spared." But Tandel knew this was no time to take offence. The only dinghy they had had to be navigated carefully to prevent the engine from getting tangled in the debris. Ropes were tied for people to hold on to; the old and the infirm, the terrified children and women were carried on shoulders to safety. The others were guided to the boat, ferried—all night—to higher ground.

While Tandel and seven other lifeguards laboured against the rising waters in Bandra-Kurla, three more went to Sion for rescue work. The rest remained on standby, waiting to be called in. They knew that exhaustion would take its toll on those who had gone in before them. The lifeguards fought the flood until morning. "As the waters receded and dropped to waist-level, we cut the engine and pushed the boat ourselves," says Tandel.

His lifeguard training helped. During his five years at H2O, he had helped rescue 27 people from drowning. Now all that training and experience was being put to the ultimate test: Tandel's team evacuated 16 buses that night, rescuing at least 3,000 people. Didn't Tandel, the sole earning member of his family, worry about his widowed mother, his two school-going brothers and his new wife, and what they would do if he met his death fighting the deluge? "I had four people to think of at home, but hundreds to think of outside," he says. "I would do it again." 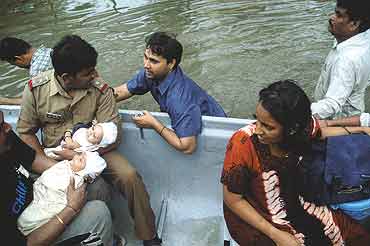 As a hellish night gave way to the next day, assistant police inspector Tushar Kadam was making the same choice, just a few miles away. He had been up all night with wife Suvarna, trying to salvage his belongings from the rainwater that stood four feet high in his ground-floor apartment. Two of his daughters slept safely in their bunk beds; his third, 11-year-old Aishwarya, was stuck at school with all the other children because of the downpour. As they stayed up talking in the dark, his wife wondered, "If we have so much flooding, what will be the state of things at the Air India colony?" They both knew the answer, for the colony was prone to flooding.

The thought stayed with Kadam as daylight broke. Leaving his waterlogged home behind, he headed to the colony in civilian clothes. The sight was unimaginable—16 feet of water; vehicles submerged so that only the tops of buses were discernible; and people perched on the compound wall, or on the roofs of buses, even hanging from the trees and shouting for help. "No one was prepared to enter the water," says Kadam. "The water was brown, and you could see carcasses in it." Unable to rally much support, Kadam returned home to don his uniform, hoping that would inspire some confidence in the others. The uniform has always been treated with awe and respect in Kadam's Goan community. So when Kadam decided to abandon a promising career as an Air-India pilot for a policeman's badge, his family was delighted. "Was it the uniform that gave me strength?" he wonders. "Something in me just said, 'Save the people'."

"Six boys dove with me into the water," he recalls. "But then, when I reached midway and turned around to see, there was no one behind me." Not one to turn back easily, Kadam swam on alone to the colony. The flooding had worsened after the colony wall gave away. The level rose 7 feet in a few minutes and took victims by surprise, including some who'd rushed to the watchman's cabin for shelter.

Kadam swam back to dry land, got some bamboo sticks and rope, and asked for volunteers. This time, two of them, Mohan Shetty and Ramvilas Kanojia, stuck on with him. "We swam against the current, pushing aside the dead dogs and rats coming at us," says Kadam. "When we reached the cabin, the doors were jammed tight. The windows were barred, the water had risen above it. We dove underwater to look inside and saw only dead bodies."

"We used the bamboo to pry open the door, and found the bodies of three watchmen and two ladies. We also found a small boy...," says Kadam. "He was in his school uniform, water bottle in one hand, and as I tugged at his body, his mother's body came floating behind him. With his other hand, he was holding tight to her pallu. I will never forget the sight." Kadam piled the bodies into a broken-down boat borrowed from an old fishing shop in Mahim. "It had a hole in it, which we plugged with cotton and plastic," he says. "But that boat was an angel."

With that single boat, Kadam ferried dead bodies to shore; transported food, first-aid and bottled water to the trapped residents; and brought 45 people to dry land over 16 hours of non-stop labour. "When I was taking candles and milk packets across, I saw a woman stranded on the the first floor. She was wailing. 'My twins haven't had any milk all night', she was saying". So Kadam stood astride the boat, reached upward, cupping his hands. "You will not leave the baby till I say 'Go'," he instructed her. "After that, they are my problem, not yours." The three-month-old twins, a boy and girl, nicknamed Bunty and Babli by their mother, were brought down to the boat, one by one. The mother followed tearfully. "It just goes to show that there's someone up there who cares for the people down here," says Kadam, conviction steeling his voice. "People should have more faith in each other."

But faith and courage were running low. "Come down and help!" Kadam shouted to the others on higher ground. "Don't just stand there and watch." His pleas mostly fell on deaf ears. "If even some of them had helped, fewer people would have died," he says, a little bitterly.

He returned home well past midnight with 14 people from the colony. They would stay and eat with the Kadams in their tiny one-bedroom flat for five days. Kadam is yet to be acknowledged by either the state government or the police force. His house still bears the brunt of the floods; the family has no TV or fridge now, the old fridge is now being used as a cupboard. "In time, we will build it all up again," says Kadam, with the quiet faith of a believer. As for rewards, what need has he for those? When his daughter, Aishwarya, found out how many other lives her father had saved that day, all was forgiven. "She hugged me and told me how proud she was," he says. "That was my greatest reward."