For the never-give-in lot, a time to reflect and pick up the pieces 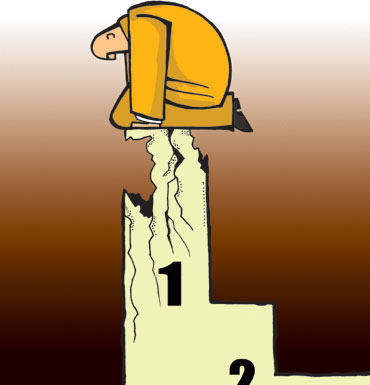 outlookindia.com
-0001-11-30T00:00:00+0553
"You’re bringing up your children for success," my grandmother once chided her son. "What are you doing to equip them to cope with failure?" The point she was trying to make was that her grandchildren were living in the heady space of accomplishment and accolades, being overly encouraged to hurdle past milestones and notch up distinctions at the risk of losing their moral compass. I never forgot that exchange, and while I did not enrol for Bible study, she raised with her question a consciousness of the unthinkable: the possibility of failure.

Some 10 years later, with a freshly minted degree in Economics from Harvard, I spent the summer of 1987 looking for a job in investment banking. I had little understanding of the field, but applied, in line with the fashion, to all the firms on Wall Street that came by to recruit us on campus. The recruiters were young, like us, but already a few years out of school, distinctly shinier, in their designer suits and $100 ties. They had the air of heirs apparent, a bullish confidence that was as appalling as it was sexy; I wanted to join their ranks just because that’s where all the best and brightest ended up.

Sadly, I never made it past round one on any of the interviews. Flying back home in October that year, I gloated over Black Monday, and rationalised that I would become instead a ‘banker with a social conscience’—an oxymoron if ever there was one—and joined a retail bank’s HQ in Chennai. It was a far cry from the chrome, glass and steel edifices in New York, and the masters of the universe who occupied them.

Remaining connected with my investment banking friends has been a double-edged experience. Their lifestyles and bonuses glitter, but I find many of them hardened, arrogant and dismissive. Some cultivate a wired, caffeinated persona and validate themselves by pursuing toys and mistresses. One of my closest friends, a trader of mortgage-backed securities, is at the heart of the current storm. Previously, his genius for simplifying complexity had been put to use to create some of the models and instruments now at the core of the meltdown.

We were supposed to have met at our 25th-year high school reunion last week, but he chose not to make it despite having time off. "Now is not the time, however much I wanted to be with you, to be abandoning my post," he said. "It’s actually a thrilling and historic time to be here. It’s a disaster, but it’s also an opportunity. Besides, I am part of this mess." "So, you’re sticking it still, huh, and not giving in?" I asked, referring to our school’s motto. "Yes, ‘Never Give In’ is my motto," he replied.

What motto do others rely on to steer through the bad patches? It’s heartening that my friend has kept his head while all about him, many are losing theirs. Meanwhile, I am paying more attention to the probing questions my grandmother once asked.

(Roy Sinai is now a freelance writer/photographer. He spent 18 years in the banking and BPO industries.)