The deconstructing of an Indian prince and an English cricketer 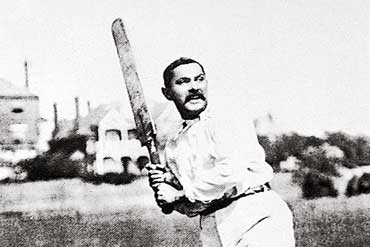 Batting For The Empire—A Political Biography Of Ranjitsinhji
By Mario Rodrigues
Penguin Rs 299; Pages: 277
If the biggest sex-change operation ever performed on an inanimate object could turn Victoria Terminus into Chhatrapati Shivaji Terminus, is it ever too late for the revisionists to look at renaming the Ranji Trophy? India’s premier domestic cricket tournament was named after "Colonel His Highness Shri Sir Ranjitsinhji Vibhaji, Maharaja Jam Saheb of Nawanagar, gcsi, gbe, kcie" or Ranji, as he was better known, a year after his death in 1933.

The BCCI, then just seven years old, was meeting in Shimla. When its founder-secretary Anthony de Mello presented a detailed proposal for a national championship of cricket, the Maharaja of Patiala leapt at the idea. He suggested it be named after his close friend who lorded over the "wild marsh inhabited by wild asses" for 26 years. And offered to present a gold cup worth £500 of the design De Mello had submitted. The proposal was accepted after the Maharaja also promised to present a miniature cup each year, which would become the property of the winning association. But the Maharajkumar of Vizianagram aka ‘Vizzy’ soon put a spoke in Patiala’s wheel. He argued vehemently against the ‘Ranji Trophy’, saying he had done nothing for Indian cricket. Instead, he wanted the trophy named after his mentor and viceroy, Lord Willingdon.

At an emergency meet of the BCCI in October 1934, the new proposal was okayed and news about the ‘Willingdon Trophy for the Cricket Championship of India’—Vizzy had got the trophy made in England of chiseled gold from a design provided by the vicereine!—was leaked. But, by then, two matches of the Ranji Trophy had already been played. Only an outcry at the "insult" to Ranji scuttled Vizzy’s move. De Mello himself was to record later that the "Ranji who finally settled in Jamnagar after the First World War was different from the great cricketer who delighted English crowds in earlier years. Ranji, in fact, did absolutely nothing for Indian sport and sportsmen.... To all our requests for aid, encouragement and advice, Ranji gave but one answer: ‘Duleep (Sinhji) and I are English cricketers’."

Out there, they called him ‘Run-get-Sinhji’. But Ranji, who played 26 Tests for England between 1896 and 1902, scored over 25,000 runs without ever "playing a Christian stroke", invented the "greatest stroke ever known" as his official biographer Roland Wild termed the ‘leg glance’, (reputedly) hit three centuries on a single day—two for his own team and one for a side playing nearby—and ran 12 off a single hit, did strange things back home. In 1911, he spurned an offer to lead an all-India XI to England which would have made him India’s ‘first captain’ but played county cricket the following year. He rejected all entreaties to contribute funds for the 1911 tour even as he was gifting dressing-room chairs to the Sussex club. And, in the official souvenir to the 1932 India tour of England, wrote: "I’ve not had the privilege of seeing anything of Indian cricket. It will therefore be a presumption on my part to offer any opinion about ‘their’ cricket."

Previous biographers of Ranji have variously explained his anti-India cricket sentiment. Mihir Bose said Ranji did not see India as a cricketing nation because he could not conceive of it as a political nation. Simon Wilde has speculated that Ranji did not see Indians as anything but British subjects. And Alan Ross felt Ranji could only relate to his past, not to his present or future. But in this devastating demolition job, Mario Rodrigues rips apart the extant stereotype of Ranji as "the charming, generous sportsman, progressive ruler and enlightened statesman" and exposes him as a sly, smooth and scheming operator intent on self-preservation. Although his years as the Jam Saheb coincided with the rise of the Indian national movement, the ‘Pillar of the Empire’ had no inclination to see India independent. Rodrigues digs deep to expose Ranji as an oft-absentee Maharaja who used his cricket to worm his way into power, and then assimilating all the imperialist attitudes associated with the game to preserve the Raj. Ranji, he says:


Batting for the Empire does for sports bios what Lagaan did for the movies. Is it poetic justice that Ranji’s disinterest towards Indian cricket is matched by its current superczars who show as much disinterest in the tournament named after him?