Granaries Of The Despair State

Thousands die of starvation while surplus food stocks rot in depots. That is the irony that is India. 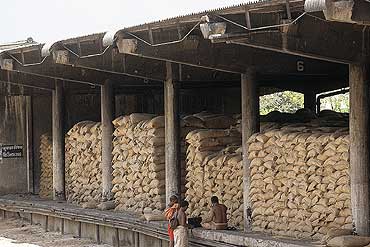 outlookindia.com
-0001-11-30T00:00:00+0553
When the Supreme Court issued notices last fortnight to six state governments and the Centre to explain why there were reports of starvation despite a foodgrain surplus of over 60 million tonnes, it brought into public domain the shocking case of mismanagement of food stocks by state and central agencies. This, when government figures itself declare that out of the 36 crore people officially living below the poverty line, as many as five crore are victims of starvation.

It is an ironic illustration of that cliche, a problem of plenty. And nobody is willing to fix or accept responsibility. Instead, passing the buck seems to be the game when thousands of impoverished people are starving, dying or have died.

Despite such a grim scenario, the government seems complacent. It is storing three times its requirement of buffer stocks, which is 20 million tonnes, and, for some inexplicable reason, is not willing to distribute it even as the stocks are rotting. According to Food Corporation of India (fci) figures, 10 lakh tonnes of stock had to be placed on the damaged list last year. And with wheat procurement by the fci touching a new high of 17.78 million tonnes in the ongoing rabi season, government godowns are overflowing with surplus grain.

The six states issued notices by the apex court in response to a public interest litigation (pil) filed by People's Union for Civil Liberties (pucl) are Rajasthan, Orissa, Maharashtra, Gujarat, Chattisgarh and Himachal Pradesh. The Union food and consumer affairs minister, Shanta Kumar, is embarrassed at the shocking state of affairs. He told Outlook: "I am not going to criticise anybody. This problem weighs both on the Centre and the state—it is a joint responsibility. I admit that something is wrong somewhere. In this day and age, it is really shameful if somebody has to go hungry."

While Shanta Kumar makes the right noises, it took an sos from Rajasthan chief minister Ashok Gehlot for his ministry to release foodgrains for the drought-affected in Rajasthan. In a letter dated December 12 last year, the chief minister questioned the Union government's wisdom of selling wheat at throwaway prices to traders for export when people in the country were starving.

Gehlot was referring to seven exporters who were allowed to procure wheat from the fci at the same subsidised prices at which it is sold to those below the poverty line. The exporters were to ship out the grain to Iraq at $203 per tonne which they procured from the fci—incidentally, in violation of wto norms—at $84 a tonne. Points out a senior fci official: "The sale at that price was totally uncalled for. You can't classify exporters as those below the poverty line. It is ridiculous."

But why is the fci, the agency that procures, stores and distributes grain, not releasing it to the drought- and famine-affected states? This question goes abegging. According to the corporation's officials, it distributes grain according to the quotas allotted by the central government for each state. But in many cases, the full allotments are not picked up. Says fci chairman Bhure Lal, "I am ready to release the foodgrains. I have been saying so for a long time but the states are not ready to pick it up."

Indeed, if one goes by the poor offtake of foodgrain by the states in recent years, what emerges is the shocking fact that the sales through the Public Distribution System (pds) outlets are alarmingly low. With pds sales dipping over the years, offtake has also come down.For example, the offtake of wheat has come down from 8.83 million tonnes in 1991-92 to 5 million tonnes in 2000. Even when there was a severe drought last year, the offtake continued to be low.

According to officials of the food and consumer affairs ministry, the reason for the poor offtake is the government's skewed public distribution policy. It was in 1997 that the government introduced the Targeted Public Distribution System (tpds) which divided consumers into families below the poverty line (bpl) and those above the poverty line (apl). Under the new system, bpl consumers would pay 50 per cent of the costs incurred by the fci for procuring and distributing the grain, while apl consumers would have to bear 100 per cent of the actual costs.

Since the introduction of the tpds, the states' offtake-allotment ratio has seen a sharp decline. The reason for this is simple. Prices of grains have gone up under the revised scheme. Now, bpl families have to pay more than what they were earlier paying for wheat and rice. In turn, the apl consumers, who have to pay 100 per cent procurement and handling costs, end up having to often pay more than the market price, thus making a mockery of the pds system itself.

Sample this. This month, the fci, under political pressure, has been procuring wheat from farmers in Punjab and Haryana at Rs 610 a quintal when the market price in Delhi and Uttar Pradesh markets is between Rs 570-590 a quintal. The net result is that when this wheat is routed through the pds outlets after adding statutory taxes, labour, transportation, freight and administration costs, it would be far more expensive than the grain available in the open market.

This situation has led to the shrinking of the apl consumer base and since foodgrains have become costlier even for the poor, the bpl consumption has also registered a decline. The demand has been so low that a high-level government committee formulating the long-term Grain Policy has, in its interim report submitted last week, recommended that the prices for apl consumers be reduced in order to make it affordable. It has also recommended that prices for apl card-holders be slashed by 25 per cent to increase offtake from pds outlets.

But then, the system of classifying families into bpl and apl categories has also come in for its own share of flak. Says Jean Dreze, honorary professor at the Delhi School of Economics: "In a country where people do not have permanent employment, a person classified as living above the poverty line could tomorrow be living below the poverty line."

Also, according to him, defining those families earning more than Rs 1,500 per month as apl has excluded millions of undernourished persons from purchasing subsidised foodgrains. By classifying many of the poor as apl, the new system has effectively shrunk the number of people covered by the pds. The situation is such that in Dharavi, Asia's largest slum, only 150 families have been issued bpl ration cards.

It is not as if the flaws in the tpds are lost on the Union government. Shanta Kumar agrees that there are discrepancies in the system. "There are limitations in any government of what it can and cannot do. That is why we have fixed those below the poverty line at 36 crore. But even here, the offtake is only 55 per cent. I am not satisfied. It is either that the poor are not buying the grains or the grains are not reaching the poor."

There is another problem, that of rationing.Under the tpds, foodgrain allocation for bpl families has doubled to 20 kg per month. However, for a family of six persons, this works out to about three kilos per month for each member, which is still way below the minimum recommended nutrition.

It's the plight of those who can't afford even a single meal in two days that prompted the pucl to file the petition in the Supreme Court. The pil raises three fundamental questions which has seized the apex court's attention. The thrust of the petition is: