Grab It By The Grassroots

Now No. 2 in Bengal, the BJP’s plan to reach the top hinges on its ground workers and the Muslim vote 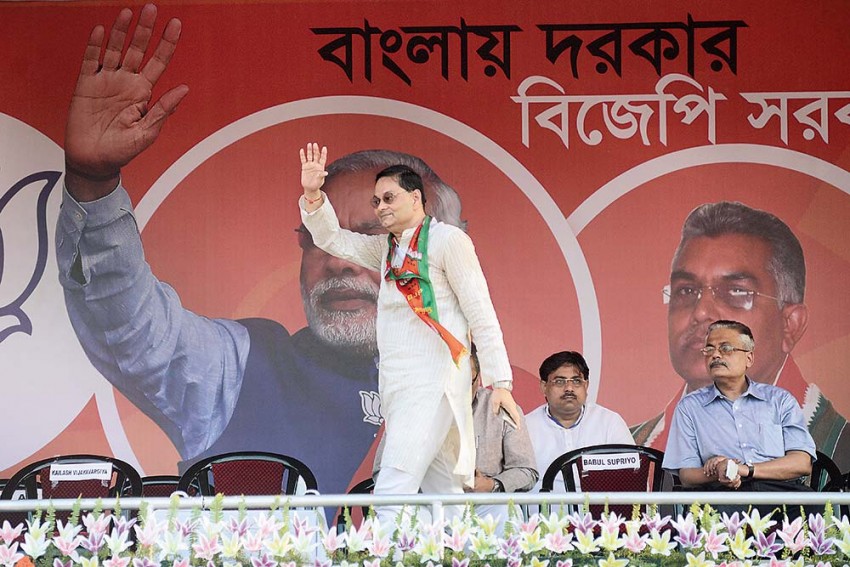 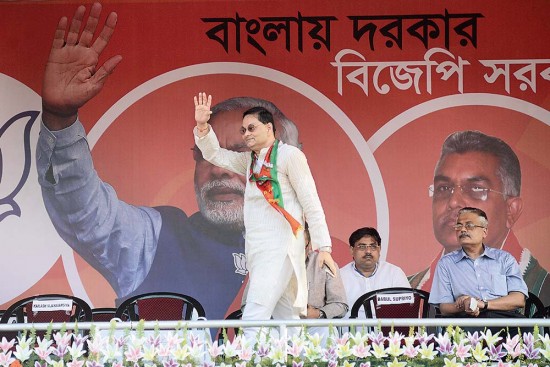 “Secretly, we are preparing to snatch the very ground from under the last strand of the grassroots in West ­Bengal,” says a BJP worker in the state’s South 24 Paraganas district. The “grassroots”, of course, is a reference to Bengal’s ruling ­party, the Trinamool. The “secret” strat­egy is part of a masterplan devised by BJP chief Amit Shah in May aimed at dominating Bengal and to be imp­lemented over the next three years. Acc­ording to the BJP worker, the plan envisages sending party workers to “each and every corner, not missing even a nook and cranny”, with “area-specific” strategies based on identifying the demands and needs of the constituents and then ensuring these are addressed.

“Making a dent in the Muslim vote has been difficult so far and we have been instructed to instill trust in the community,” says the worker. Shah’s strategy may be working—in elections to seven civic bodies in August, the BJP left the Congress and the Left Front behind to become the number two party after the Trinamool, which won 140 of the total 148 wards. It won six wards that used to be Left or Congress strongholds, while the CPI(M) and the Congress drew a blank.

Though Trinamool general secretary Partha Chatterjee made light of the BJP’s gain, saying it was still a “distant second”, this was the first time the saffron party made inroads into the civic bodies. The BJP’s first Lok Sabha seat from Bengal was bagged by Tapan Sikdar in 1998 from Dum Dum. In 2009, too, the party won just one seat—Darjeeling—and added two more in the 2014 general elections. The state assembly did not have a single BJP member until 1999, when Badal Bhattacharya won the Ashoknagar assembly seat in a bypoll, after which the BJP won no ass­embly seat—until Samik Bhattacharya won the Basirhat Dakshin bypoll in September 2014. Samik’s victory, though, was attributed to anti-incumbency, esp­ecially as it came in the middle of the infamous chit fund scam.

“It was only around the middle of Mam­ata Banerjee’s first term as CM that people started noticing our party,” says Netaji Subhas Chandra Bose’s grandnephew Chandra Kumar Bose, who had taken on Mamata in the 2016 assembly poll on a BJP ticket. “They had grown disillusioned with the ‘pori­borton’ (change) that Mamata promised but did not deliver. The Left had already let them down and they had no confidence in the Congress. So they started looking up to the BJP as the only alternative. Our main constraint has been the lack of workers on the ground des­pite having several prominent leaders in the state.”  Bose’s assessment seems to be borne out by the BJP’s failure to stop the Trinamool from walking away with 211 of the 294 assembly seats in the 2016 polls despite a high-profile campaign in which PM Narendra Modi made whistle-stop chopper visits. At the same time, it is undeniable that the BJP is steadily rising to number two position in Bengal.

“The main thrust of the BJP has been to first topple the other contenders for the second spot, followed by holding on to that position,” says political commentator Tarun Ganguly. “The Amit Shah strategy is geared towards becoming number one eventually.” State BJP chief Dilip Ghosh agrees and says, “The panchayat polls will be the quarter-­finals, the Lok Sabha polls of 2019 will be the semi-finals and the 2021 assembly polls will be the final match.”

Exuding faith in his party’s ability to “win the final match”, Ghosh reveals some aspects of how they plan to it. One of the key exercises is to “strengthen our party’s presence at the booth level”—one of Shah’s tried-and-tested strategies, which has been able to turn the tide in favour of the party in states where it had virtually no presence earlier, namely Assam and Manipur. An important task chalked out for the party workers is to make a dent in the Muslim votebank.

A key element of the Amit Shah strategy involves strengthening the party’s ­presence at the booth level.

“Muslims account for 33 per cent of the Bengal electorate,” says Bose. “Muslims have traditionally been voting in a united manner, which means any political party that is able to capture these votes can be more or less sure of winning. This is why political parties put so much effort into it. The previous (Left Front) regime and now the Mamata government have been following an appeasement policy, which seeks to keep the community leaders happy with populist tricks such as Rs 2,500 monthly stipe­nds for Imams, instead of doing any real development work for the upliftment of the people. But our approach is different. We are trying to reach the people, going door-to-door, and also working to alleviate poverty. This is how we are trying to capture the votebank.”

Bose points out that there is no way for the BJP to come to power in West Bengal other than following this strategy beca­use banking on the Hindu vote will not work in a state where the Hindus don’t vote in a united manner. “Hindu voters are divided between the BJP, the Trinamool, the Congress and the Left because they vote on the basis of issues, not their religion,” he says.

Indeed, Bengal, like Bihar, has posed a complex problem for the BJP because of the large number of Muslim voters. “We know that the BJP is trying to push the development agenda on us and is desperate to convince us that we will benefit if the party ruling the Centre also rules the state. But we are still wary about them because our religious identity is a very important factor in all that we have to face,” says Ruksana Begum, wife of a farmer in Haldia, which had civic body polls in August. Pleased with the Sup­reme Court’s verdict on triple talaq, she doesn’t deny that the credit goes to the BJP, but clarifies that it doesn’t mean she will vote for it. “But we don’t vote on an individual basis. We vote as a community,” she says.

Other than securing the Muslim vote, the BJP strategy, for retaining the number two slot and then inch towards the number one position, has been to woo different segments of voters in different ways, according to what the party und­erstands as the need of the hour. A rec­ent example is how the party dealt with the agitation for carving out a separate Gorkhaland state from the northern parts of Bengal. The BJP, which rep­resents the agitation’s epicentre Dar­jeeling in the Lok Sabha and has never opposed the Gorkhaland demand unequivocally, found itself in a tight spot when the Gorkha Jana Mukti Morcha, the organisation leading the movement, demanded that the Centre declare its position on the issue.

The Centre had to sit up and take note because the Gorkhas launched a massive agitation in the hills of Darjeeling, which turned violent. There were some bomb blasts near government establishments, in which at least one civilian was killed. It was also alleged that outlawed militants from the Northeast and Maoists from neighbouring Nepal might have infiltrated the movement, but the Gorkha leaders denied it. During the past one-and-a-half months, the hills of Darjee­ling saw a series of strikes, including a transport ban by agitators and a complete shutdown of markets.

The BJP asked Bose to initiate a dialogue with the agitators because Bose had earlier gained the confidence of the Gorkhas by declaring that they should be heard. Though Mamata has managed to break the deadlock recently by getting one faction of the agitators to come to Calcutta for a discussion on the issue, the demand for a separate statehood is yet to be resolved and winning the confidence of the hills folk with a mutually beneficial strategy rem­ains high on the BJP agenda.

The BJP is clearly trying to manoeuvre its way through the complex Bengal maze while grasping at the grassroots for anchor. The civic polls have proved that the strategy is good enough for number two. From here to being num­ero UNO is still a long battle.