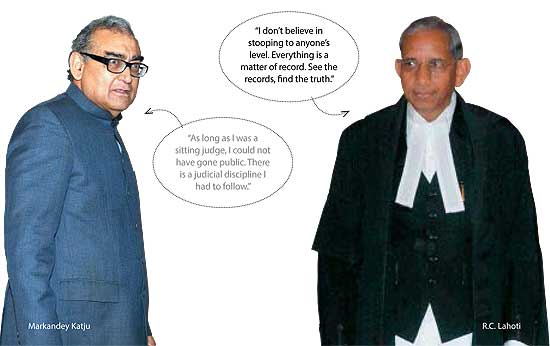 After an unusually long silence, Justice Markandey Katju has made it to the headlines, again. And for three days the sensational revelations made by him in his blog ‘Satyam Bruyat: Speak the Truth’ ruled the airwaves, newspapers, even rocked Parliament as he railed against three former Supreme Court chief justices for failing to stand up to political pressure and for rescinding their original decisions. The case in point is the extension of a ‘corrupt’ additional judge’s tenure in the Madras High Court and for later confirming him as a judge before finally transferring him out to the Andhra Pradesh High Court.

Cloaked in opaqueness, the lordships are unaccustomed to being questioned about their actions and the curt former SC judge is demanding they answer. But in choosing to speak up now, nine years after the fact and when the main character of the sordid saga is no more, the question being asked is—why now?

Some people have suggested that had he spoken out in 2004-05, his progress to the Delhi HC and to the Supreme Court and beyond would have got stymied. That he did...