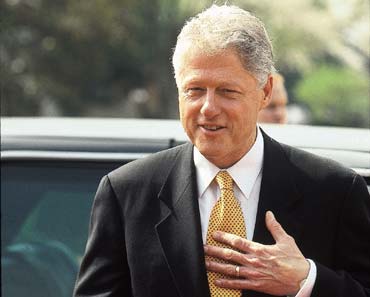 outlookindia.com
-0001-11-30T00:00:00+0553
Americans don't expect too much from their former presidents. Political galas and afternoons of golf are normally interspersed with lucrative speaking engagements at top universities. So it came as a surprise when former president Bill Clinton announced that he would actively help raise funds for India's earthquake victims. Says Jake Siewert, press secretary to the former president: "He saw some of the coverage of the earthquake and was very moved by what he saw. He has very fond memories of his trip to India with his daughter Chelsea."

On January 31, Clinton called Prime Minister Atal Behari Vajpayee to offer his condolences and his support, and immediately turned to the local Indian community. "Clinton had his staff reach out to some prominent Indian-Americans," says Siewert, "and they pulled together a meeting in New York on February 1 to try to accelerate some of the fundraising that has been going on." Among the participants in the two-hour meeting on February 1, which was held in the corporate office of Citibank, were India consul-general Shashi Tripathi, managing director of McKinsey and Company Rajat Gupta, former president of aapi (the Association of American Physicians from India) Dr Suvas Desai, and co-founder of the Silicon Valley-based TiE, or The Indus Entrepreneurs, Kailash Joshi.

There has been no shortage of fundraising initiatives among nris in the US. But no organisation or individual can match Clinton's fundraising prowess. His charisma and speech-making skills are legendary, as is his ability to draw high-ticket donors to Democratic events. "Two or three things emerged," says Joshi of the meeting. "The most important was that we unify our efforts in some organised way." Clinton and the group agreed that their efforts would require substantial cash generation. To that end, two fundraisers have been tentatively scheduled by the umbrella group, now known as Americans for Indian Relief and Reconstruction. One of the fundraisers is likely to happen on the West Coast and one in New York, both of which Clinton expects to attend.

The February 1 discussion delved into other ways in which the former president could assist the recovery effort. "They talked about the smaller villages," says Siewert. "Mr Clinton suggested that perhaps some villages could be adopted, and creating sister cities and the like. They also talked about trying to foster some ties between the smaller villages, which were wiped out, and an outside entity in the US, such as a company." Other ideas focused on long-term and preventive measures. "There's a need to help India not only with immediate reconstruction but to think about some institutional improvements, such as advance planning and resource centres," says Joshi, pointing to the recurring devastation of cyclones and floods. "We need to be better prepared for these natural disasters."

When asked by the consul-general for his support in instituting a system of disaster management in India, the former president explained that he had confronted such problems at home. "He talked about his own experience with prime minister Vajpayee of revamping fema, the Federal Emergency Management Agency, which has been kind of a moribund political institution," says Siewert. "And he talked about some of the expertise that they had pulled together there." One of the more unusual ideas that came out of the meeting was the possible creation of a youth corps. The corps would involve youth from both the US and India in recovery efforts."It will also help in the relations between the two countries," notes Joshi. The businessmen in attendance at last week's conference intend to tele-conference before meeting with the former president again on his return to New York this week.

For Clinton, whose transition to private life has been as much under the spotlight as his days in the White House, his involvement in the earthquake cause has come without the regular trappings of bureaucracy. "It was a very interesting conversation," says Siewert. "The people around the room said, 'Oh, we don't need to wait for the government. We can get into this right away.' And obviously the president is a very strong believer in government and what the government can do in these situations, but he was very much in his private-sector mode in this particular instance." Siewart then laughs, and says, "Not that long ago, he'd have had a totally different conversation with his government." But then, in government or outside it, Clinton's heart does seem to have special feelings for India.