Goodbye To All That?

The hunt is on, officially. But the peace may show how badly New Delhi is out of touch with reality. 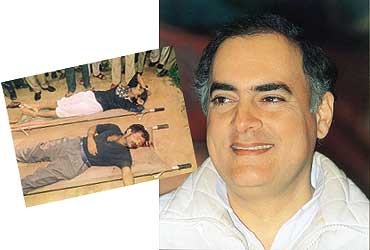 outlookindia.com
-0001-11-30T00:00:00+0553
When Union home minister L.K. Advani told the Rajya Sabha, on November 30, 2000, that New Delhi had requested the Sri Lankan government to extradite LTTE leader Velupillai Prabhakaran for facing trial in the Rajiv Gandhi assassination case, a few powerful men in Colombo had gone into a complete tizzy. The then Sri Lanka prime minister, Ratnasiri Wickremanayake, reportedly exploded: "We will do no such dirty thing."

Three days later, the then Sri Lankan foreign minister, Lakshman Kadirgamar, summoned the Indian high commissioner to Sri Lanka, Gopal Gandhi. Kadirgamar had just returned from London where he had read the 55 pages of the Rajya Sabha debate that his country’s high commission in Delhi had faxed to him. The same evening Gandhi sent a cable to the foreign secretary saying: "I summarise his (Kadirgamar’s) observation in more or less his words."

The cable quoted Kadirgamar at length: "Has a new proposal (for Prabhakaran’s extradition) been made? I know of the original request and of the ritual reminders. When I was told of this development, I wondered if there was something fresh given by your team. I checked with our legal advisor in the Sri Lankan foreign office who said nothing was given to him.... P’s (Prabhakaran’s) extradition in the present circumstances is not practically realisable."

What Advani had referred to in the Rajya Sabha was the visit of the Multi-Disciplinary Monitoring Agency (MDMA)—which was established in December 1998 to track down those involved in the Rajiv assassination case and were absconding—to Sri Lanka in November 2000. The three-member team had called upon Sri Lankan attorney general K.C. Kamalasabyason to discuss, as Advani had told the Rajya Sabha, different aspects of the extradition. But even Kamalasabyason went on record claiming that the Indian team hadn’t made any formal or informal request for Prabhakaran’s extradition.

All this shows just how complex the Prabhakaran issue is for the Indian government, now compounded by the LTTE leader’s first public appearance in 12 years at Killinochchi last week. No longer is available to the Indian government—and its Sri Lankan counterpart—the fig leaf that concealed inaction: since Prabhakaran’s whereabouts were not known, he couldn’t obviously be caught and extradited.

Not willing to make the government’s task any easier, the Congress has now publicly asked it to get Prabhakaran extradited. The party, obviously, feels stung by the LTTE supremo’s audacity to describe the assassination as "tragic", showing no contrition for the killing he ordered. Just how politically divisive the issue is can be discerned in MDMK leader Vaiko’s pleas to New Delhi to allow LTTE spokesman Anton Balasingham to seek medical treatment on "humanitarian grounds". Vaiko cited the "umbilical relationship" between the "Tamils of Eelam" and the Tamils of India to back his request.

Considering that the LTTE has been a proscribed outfit since May 1992 under the Unlawful Activities Prevention Act (1967), it would be unrealistic to expect New Delhi to concede to Vaiko’s request. Prabhakaran also continues to be a proclaimed offender in the Rajiv assassination case, with a warrant for his arrest under TADA on January 31, 1992.

India’s situation is delicate, more so because Colombo is on the verge of initiating a dialogue with the LTTE. There are also expectations that Colombo would soon lift its ban on the Tigers, a precondition Prabhakaran set in his last week’s press conference for initiating talks on establishing an interim administration in north-east Sri Lanka. (The island-nation banned the LTTE only in 1998, after it bombed the Temple of the Sacred Tooth Relic in Kandy, one of the holiest Buddhist shrines, a few days before the Sri Lanka’s 50th independence anniversary.)

It was on June 3, 1995, that Colombo confirmed receipt of New Delhi’s formal request regarding extradition of Prabhakaran, Pottu Amman (LTTE intelligence chief) and Akila, its women’s wing leader (since reported to have been killed in combat operations). But the problem is complicated because there exists no formal extradition treaty between New Delhi and Colombo. What exists is an arrangement for extradition under the Sri Lanka Extradition Law No. 8 of 1977, which was extended to include Commonwealth countries (of which India is one). Similarly, the Indian Extradition Act, 1962, was extended to Sri Lanka in August 1978.

Explains Avtar Singh Bhasin, author of five volumes of India-Sri Lanka Relations and Sri Lanka’s Ethnic Conflict: "Extradition can still be sought in accordance with the Sri Lanka Extradition Law (SLEL), but this requires India to furnish the full case documents, acceptable to the Sri Lankan courts, for the consideration of Lankan authorities. Once Sri Lanka accepts such documents on the recommendation of the attorney general, the Court of Commital is authorised to issue an arrest warrant for the accused. The Government of India knows the pitfalls of the process—the trial can’t proceed in the Court of Committal in the absence of the accused."

Bhasin says when the CBI was asked to ready the necessary documentation for the extradition under SLEL, it told the government "that there was no guarantee that the material filed by the Government of India was likely to be found sufficient by Colombo". The CBI also told the government to keep in mind the fact that even if Colombo wished to help India, "it was in no position to apprehend and hand over the accused to India".

But the situation changed dramatically in 1995. The talks for peace between Sri Lanka President Chandrika Kumaratunga and the LTTE was on the verge of collapsing. This, consequently, inspired New Delhi to submit extradition requests to Colombo. It’s still not known what the precise status of the 1995 extradition request is, but one thing is now amply clear: as long as the peace negotiations continue between Colombo and the LTTE, India might as well give up hope on extraditing Prabhakaran. And were the talks to collapse, and in case the LTTE supremo is apprehended, then Colombo would be busy for years prosecuting him for terrorist acts committed there. Obviously, the extradition request would take a backseat.

There is another framework that could facilitate the extradition: the SAARC Convention on Suppression of Terrorism. But this has an expediency clause that enables a government to disallow such a request.

There’s another twist in the Prabhakaran-India tale. At the moment, the ban on the LTTE, imposed in 1992, is currently under review. Extended every two years, the ban expires on May 13 this year. Home ministry sources say that on February 21, a letter was sent to the Tamil Nadu government asking it, inter alia, to furnish reasons for justifying the extension of the ban in a manner that can "stand scrutiny". The letter sought from Tamil Nadu details of the cases registered and arrests made, indicating evidence of "continuing activities of LTTE, pro-LTTE elements and public groups including Tamil chauvinist outfits in Tamil Nadu since 2000". The state government was also asked whether or not the LTTE has links with other militant organisations in India, and whether the "utterances of LTTE leaders and cadre could be considered anti-India".

On November 1, 1998, a Chennai-based lawyer challenged the continuance of the ban on LTTE’s activities in India before a statutory tribunal in Tiruchirapalli and questioned the government’s charge that the LTTE’s goal of a separate Eelam undermined India’s sovereignty. That, however, didn’t prove serious enough to lift the ban.

Meanwhile, Tamil Nadu chief minister Jayalalitha has declared that "there’s no difference between terrorist activity being carried on by some outfits from Pakistan and what the LTTE is doing. In fact, the LTTE is deadly, deadlier. It is the opinion of my party that the central government shouldn’t adopt a different yardstick while dealing with terrorist organisations in Pakistan." Obviously, Jayalalitha intends to pressure New Delhi into seeking Prabhakaran’s extradition and demonstrate the same amount of zeal in dealing with the LTTE as it has shown vis-a-vis the Jaish-e-Mohammad and the Lashkar-e-Toiba.

There is one difference, though. The Pak-based militant outfits are organisations that attract the provisions of the controversial Prevention of Terrorist Act (POTA). The letter from the home ministry to the Tamil Nadu government on the issue of extending the ban on the LTTE doesn’t mention POTA. Considering that the LTTE is a proscribed organisation involved in the assassination of a former PM, it makes little sense not to bring it under POTA. Otherwise it could be perceived as a dilution of its stance on the LTTE.

New Delhi indeed finds itself in a peculiar situation. While the extradition of Prabhakaran is at best academic, and satisfies only the imperatives of domestic politics, any accommodation of the ltte in Sri Lanka’s political mainstream would render New Delhi’s extradition endeavour completely meaningless.