Gone With The Wind

The jasmine has lost its fragrance in the eyes of youth 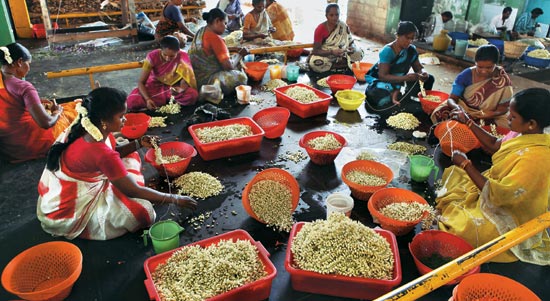 Scent Of A Flower

It was almost a rite of passage for girls in Chennai. They hit puberty, and their mothers would adorn them with a mallipoo jade or maggina jade (as it’s called in Kannada)—where jasmine buds are stitched onto a long piece of cardboard that runs the length from the back of the head to the tip of the hair. Then, dressed in a dhavani (half-sari) or sari for the first time, they would be marched off to the photo studio. A picture would be taken with the girl’s back to the mirror so that the jade was visible in all its glory. Many middle-aged women still preserve sepia-tinted pictures of that occasion. For those who could not afford the several kilos of buds that went into the jade, there was always the string of flowers that was—and still is—sold by the mozham (the measure from the tip of your finger to the elbow).

Today women in Chennai are switching from long plaits to short hair, hence, the string of jasmine is out of favour.

But ideas of feminine adornment are changing. “Today, tweens or teens wouldn’t be caught dead wearing jasmines,” says Kolar-based Srilatha Suresh, whose daughter Annanyah has a “boy cut”, which rules out wearing a jade. Annanyah’s fashion statement—her icon is Kareena Kapoor—certainly does not include the fragrance of jasmine, unless it comes in a bottle from Paris. Shanti Mallarvizhi, a Chennai shop assistant, says her teenage daughters “only wear jasmines in their hair for marriages and other traditional functions”. Shanti Gopal, a housewife, says they’ve just become too expensive: “The price has more than doubled in the last few years—what used to cost Rs 4 now costs Rs 10,” she grumbles. Time was when fashion decreed how jasmines were worn—all the way down the length of the plait or bunched at the top. Today, as women in Chennai are increasingly switching from paavadais to salwar kameez and from long oiled plaits to short hair, the once-ubiquitous string of jasmine is falling out of favour. Earlier, if a girl was called ‘Malli’ (which means jasmine bud), it meant she was innocent. Now, in the lingo of Chennai’s with-it crowd, ‘Malli’ is an old-fashioned, dowdy woman—a behenji, if you like.

Nevertheless, Tamil Nadu remains the leading producer of jasmine in the country, with an annual production of 77,247 tonnes, harvested from a cultivated area of 9,360 hectares, much of it in the Madurai-Nellakottai, Kanyakumari-Thovalli, Coimbatore-Trichy and Chennai belts. During the peak season, which begins in April-May and is just drawing to a close, some 100 tonnes valued at Rs 30 lakh are harvested everyday. Chennai alone accounts for sales of 100 kg per day during this period, with two huge markets at Koyembedu and Parry’s.

So, who’s buying the jasmines now? Some 60 per cent of the 100 tonnes harvested daily goes to supply the perfumery business, says M. Kannan of Kannan Floral Exports at the Koyembedu Flower Market. But most of the remaining 40 tonnes still end up in households. “You may not see too many girls wearing flowers here, because they are trying to shake off tradition, but outside Chennai, no woman will step out of the house unless she is wearing flowers,” he says. In Chennai, Shanti Mallarvizhi and her daughters may have stopped adorning their hair with jasmine daily, but Shanti still goes to the flower-sellers outside temples on auspicious Fridays, offers flowers to the deities, and then brings home armloads of jasmines to offer Pullaiyar (as Ganesha is known here). Cultural activist V.R. Devika, who cut her hair some years ago, is another regular. “I miss wearing mallipoo now that my hair is short, but I pay my flower-seller Rs 200 every month during the season for the fragrant flowers, which I place on a brass lamp so the smell wafts to every room.” Then there are the NRIs, who indulge to the hilt their nostalgia for jasmines when they come to Chennai during the summer holidays.

Kannan also exports a tonne of mallipoo every week to Canada, US, Singapore, Gulf and the UK. He says 20 per cent of the nearly 35 tonnes he exports during the season goes to Hindu temples abroad, while 5 per cent is ordered for wedding pandals. Five years ago when he started exporting, only 20 kg was shipped out. Kannan got into the business after discovering there was money to be made in jasmine. While on a business visit to Dubai (his family owns rice and oil mills near Madurai), he found three mozhams selling for 5 dirhams (Rs 350 then) at a temple there. “For six years, I studied every aspect of the flower, before growing it from 1997 on 12 acres of land, where rice and dal used to be cultivated. The average yearly income on half an acre of jasmine field is Rs 3 lakh,” he says.

Outside his shop, nearly 50 women deftly string jasmines that go into thermocol plates covered with cling film, which are then placed in cartons to be flown from Chennai. “The buds remain fresh for nine days,” he boasts. While women fashion strings, men make garlands. Panchali is one of the hundreds of women who come to Koyembedu market to string flowers. “I have been doing this since I was eight. I earn Rs 200 a day during the season. My husband is a garland-maker.” What this couple earns puts their two children through school.

“The jasmine market is like a share market—at 6.30 am, it’s Rs 50 for a ser (300 gm) because buds are fresh, at 9 am it’s Rs 40, at noon it is Rs 30 and by evening it drops to Rs 10,” says Suresh, who grows jasmine on his one-acre farm at Guruvoyal, on Chennai’s outskirts and transports the buds to Koyembedu early every morning.

As the season ends, the price shoots up from Rs 200 a kg, touching Rs 500 in December, when some farmers use expensive fertilisers to keep them growing off-season. But this doesn’t deter young mnc executive Uma’s Bombay-based fiance, who comes laden with jasmine garlands whenever he visits her in Chennai. Uma’s fiance has warned her, however, not to expect him to buy her jasmines when she moves to Bombay. “There,” exclaims a culture-shocked Uma, “people believe only ladies of the night wear flowers in their hair!” Nor does the off-season price deter those buying basketloads of the fragrant white buds for weddings. “Jasmines are aphrodisiacs,” points out V.R. Devika, “Why else are bridal beds strewn with mallipoo?”