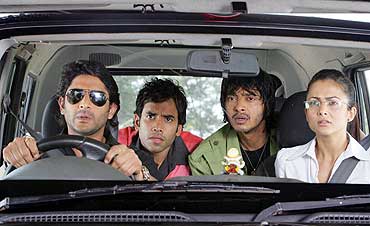 Long ago there was this utterly kooky but rather unsung comedy called Aaj Ki Taaza Khabar starring an odd assortment of actors—Kiran Kumar, Radha Saluja, Asrani, Manju, Paintal and Padma Khanna. It was quite a delectable tale about a distrustful wife whose henpecked husband unwittingly ends up spending an innocent night out with an unknown lady atop a broken down giant wheel. Next day, to avoid confrontation with his angry wife, he cooks up a lie about having been out with an old friend, rather imaginatively calling him Champak Bhumiya. Golmaal Returns is actually a retake of the same situation, only the magnificently original name Champak Bhumiya gets swapped with a commonplaced Anthony Gonsalves and the delightful situational humour of the original makes way for inane jokes and...