Falters because it’s not corny enough. More jokes and gags would have made it merrier. 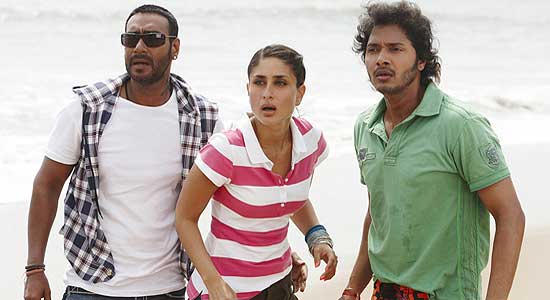 Rohit Shetty’s is quite an incredible Bollywood success story, built entirely on a franchise of silly comedies. Though unrelated in terms of plot or continuity, these films are united by, trademark stupidity. The third in the series of Brand Golmaal falters because it’s not corny enough. More jokes and gags would have made it merrier. But Shetty lets action take over at the expense of comedy, especially in the second half. He takes inspiration from Hindi family films of yore, Khatta Meetha and Hamare Tumhare. So you have a pair of broken-up lovers—Mithun Chakraborty and Ratna Pathak Shah—uniting again in old age and getting to live together with their respective sets of kids who can’t see eye to eye. The standout performances and few genuine laughs come from the scenes recreating the Mithun-Ratna romance with father Prem Chopra acting as an obstruction. Ajay is a deadpan breaker of fingers who keeps his shirt unbuttoned till the waist, Kareena Kapoor is irritatingly bubbly and Tushar Kapoor’s dumb act, which once got him attention, is not as funny. The film feels like an over-chewed bubblegum. Golmaal 4, if Shetty is planning one, would need serious comic reinvention.