Science and art stitch an intricate pattern of beauty at Prithvi 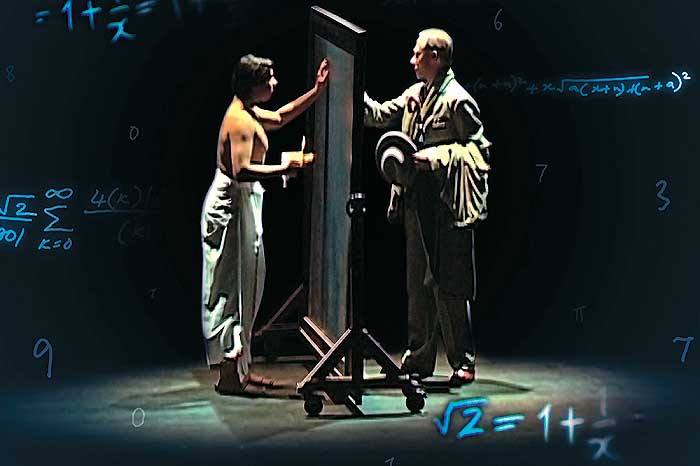 How do you marry maths with theatre, why indeed should you marry maths with theatre? Ask actor-director Simon McBurney, who is preparing to showcase maths genius Srinivas Ramanujan to Indians in the play A Disappearing Number. Or better still, ask Sanjna Kapoor—who, in her firm belief that the sciences and the arts must find common platforms, has thrown open the doors of Mumbai’s iconic Prithvi theatre not only to McBurney and his troupe, Complicite, but equally to thousands of Mumbaikars across age, language and disciplines. It’s not that difficult to find common ground, she says, because “pure maths, like art, is a quest for understanding without any necessary future utilitarian use”.

Sanjna has dreamt of hosting A Disappearing Number in India ever since she saw the path-breaking, and award-winning, play in London almost three years ago. Inspired by mathematician G.H. Hardy’s text A Mathematician’s Apology and bolstered by material from Cambridge University, the play is the story of the almost-magical mathematical collaborations between Ramanujan and his English mentor, Hardy. It explores, says Complicite’s introduction, “ideas and questions about mathematics and beauty, imagination and infinity, continuous and permanent, past and future, how we create and how we love”.

As it happens, Prithvi’s stage is not big enough for the play, so A Disappearing Number will be staged (from August 9-11) at Mumbai’s grand old Jamshed Bhabha auditorium at the National Centre for Performing Arts. “It’s okay,” shrugs Sanjna, “Prithvi is hosting it.” What’s more, Prithvi has set the mood and context for the production with a Maths Month on its premises in which McBurney and his troupe will also participate. 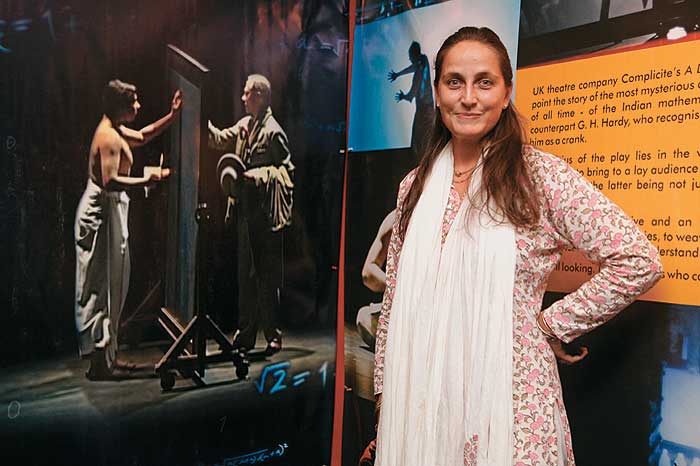 Both for the fortysomething Sanjna, a scion of the Prithviraj Kapoor khandaan, and for Mumbai’s theatre-lovers, Prithvi has been far more than a stage rented out to avant-garde producers. It has been a space for youngish theatre lovers to hang out over Prithvi cafe’s famous Irish coffee, or be part of animated, often aggressive, debates on the steps or in the foyer over plays, playwrights, theatre, art and life itself. The easy and insidious charm of being at Prithvi, even on days when there aren’t shows, is addictive. And, of course, it has been a great space for plays too. With over 500 shows a year, successful theatre workshops for children, and the buzzing annual theatre festival, what more did Prithvi need?

Lots more, is what Sanjna thought, especially after the theatre complex created and nurtured by her parents Shashi and Jennifer Kapoor turned 25 in 2003. “We may be this mecca but we are still a cocoon; we know little about what’s happening across continents and cultures, not only theatre-wise but in other disciplines too,” she says.

It needed a leap of imagination to re-invent Prithvi as theatre plus more; Sanjna found an able ally in Sameera Iyengar, alumnus of the Massachusetts Institute of Technology, and presently, director of Prithvi. Their attempts to make Prithvi relevant and interesting to people outside the rather incestuous theatre circuit have begun to yield dividends.

The duo began by widening their view of the arts that Prithvi could play host to. Its first non-theatre partner, so to speak, was pen, which brought along its band of followers from the world of poetry and literature to interact with theatrewallas in a series of events. Then, Prithvi collaborated with vikalp, an alternative forum for short films and documentaries, with screenings and post-film discussions. “I selfishly wanted theatrewallas exposed to all this and wanted their audiences exposed to my theatre,” says Sanjna. Once the template was more or less settled, the norms of engagement worked out, the horizon simply widened. Prithvi turned itself over to Net denizens to host the YouTube Night, a screening of YouTube videos followed by lively conversations between filmmakers and the audience. “We wanted to have more conversations and engage with creativity beyond theatre,” says Iyengar. “We want non-theatre people to come here, enjoy, engage and critique.”

That “leap of imagination” gathered momentum when Prithvi stretched out to that mecca of sciences, the Tata Institute of Fundamental Research (TIFR). Working alongside Prof M.S. Raghunathan, Homi Bhabha chair of atomic energy at TIFR, Sanjna and Iyengar  introduced Chai and Why, a once-a-month event at Prithvi open to people of all ages and disciplines, enabling them to listen, and interact with, TIFR scientists explaining mathematics and physics at a daily level; with tea thrown in. “Prithvi encourages cross-stream collaborations,” says Raghunathan. “This play is apt, mathematicians look for truth and beauty, the arts also do. It mingles beautifully at Prithvi”. The Chai and Why sessions, now a year old, run to packed audiences, ranging from eight- to 80-year-olds. IIT Bombay has designed an exhibition on Ramanujan, and MIT has organised workshops at the theatre recently. “If someone told me to do this 10 years ago, I would have said ‘No way’, but Prithvi has grown up in many ways,” explains Sanjna. “If we say we matter, arts and theatre matter, we have to reach out.”

Part of Prithvi’s Math Month, currently under way, has been the Maths Mela, an unconventional engagement with the subject directed by school and college students. Besides the Ramanujan exhibition, it included a series of films on maths, a laboratory of maths games and puzzles and live performances of juggling, music and rhythm, and interactive lec-dems. One of the coming highlights will be vocalist Shubha Mudgal and tabla player Aneesh Pradhan keeping rhythm with maths patterns and equations. All of which sits beautifully with Hardy’s observation: “A mathematician, like a painter or a poet, is a maker of patterns. And beauty is the first test.”

“Complicite’s A Disappearing Number so perfectly matches what we are trying to do,” says Iyengar. Sanjna, for her part, rates Prithvi’s non-theatre outreach attempts as “half-successful” but promising. “We Kapoors are this idiotic family, we instinctively do things, hardly ever think and articulate the whys and hows, but it’s time we used all the fabulous content we have and the reputation Prithvi commands,” says Sanjna. It’s happening.