'Back home' was always going to be a problematic place. And not just because it was not one place. 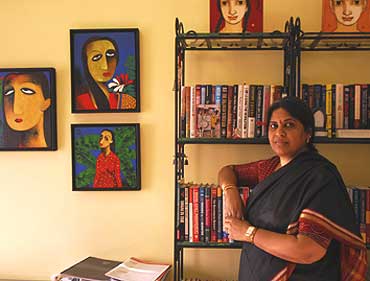 outlookindia.com
-0001-11-30T00:00:00+0553
I was an army brat, which meant that everyplace—and no place—was my permanent home address. In fact, all it took for me to think of someplace as "home" was some rickety mes furniture, and a school that I could go to. Geography was never a part of what constituted "home". But that didn't mean we were allowed to grow up with an "I am just an Indian from anywhere" sort of identity. The sacredness of the "native place" was always invoked by my parents and our battle-axe family retainer, to explain to us kids why we had to bother to get fluent in Telugu—a language that our friends made fun of, even though my dad assured us that it was known as the Italian of the east.

Copious explanations were given about our "back home" to neighbours in the cantonment, to explain exactly what kind of 'madrasi' we were—and were not ("No, no, we don't use coconut oil and eat fish, we are not from Kerala. In 'our parts', we cook in til oil, eat lots of red chillis").

And every year, when my father got his annual leave and ltc, the "native place" loomed large, as did the furrows on my mother's forehead. That's when our Telugu would have to be brushed up, my clothes reviewed for modesty, the hateful long silk skirts (pavadais or "park-in-ee") brought out of the trunk, and a string of dos and don'ts dinned into me. Don't be rude, don't be forward, don't say you don't like the food on your plate, make sure that you have a small dot ('bottu') on your forehead, no absolutely not that dress, no trousers. The goal was to make us look and behave as if we had never left "back home". 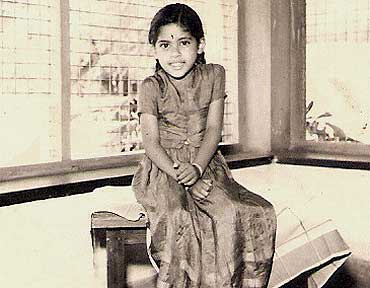 A young Rama at home in Andhra

"Do you know Telugu at all"? aunts and uncles would boom, by way of greeting, as soon as they saw my brother and me. Before we could answer, my mother would hastily boom back, "Of course they do, how can it be that they don't?" "Is this food too spicy for you?" they would ask challengingly, and my mother would again hastily interrupt: "If they can't even eat this little amount of chilli, what good are they?"

However, by the time I got to college, I no longer was willing to oblige my mother in her request that I behave the way nice girls "back home" did. Matters really came to a head when my mother suggested that I wear a half-sari to go to college in Miranda House, Delhi. That's when "back home" became my official enemy, and the native place a thing to run away from. 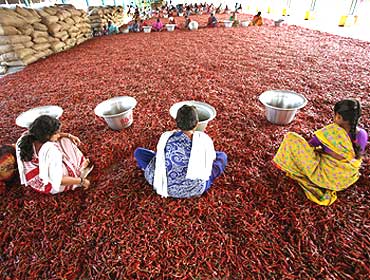 So where exactly was "native place"? Well, in early childhood, it was a combination of Madras, where my mother's family lived, and Modukuru, a village about 20 km from Guntur, where my father's uncle lived. Modukuru was always a bit of a nightmare—we were curiosity items for folk in the village. My father was the renegade who went off to join the military, the boy who had made good, but we were the funny kids who were scared of lizards and cows, and who spoke in English with each other. While the mud floors and tiled roofs of the house were charmingly quaint, the bathrooms were open to the sky, and oh so primitive.

My dad's old man was the assistant 'karanam' of the village and its post master as well. (Karanams were the equivalent of revenue officers of the village, responsible for maintaining land records, and often enhanced their job description by mediating in feuds over land.) In those days, if you were travelling first class by train, you could have a 'request stop' on the Grand Trunk route. And that's how we would get to Modukuru.

"Native place" from my mother's side was Adyar in Madras. In contrast to Modukuru, Madras was the big city—we'd be wide-eyed when taken to the Marina beach or to see the banyan tree in the Theosophical Society, or whenever we came into contact with my grandfather. He used to be a Freemason in his time, had uncharitable though very funny stories to tell about everyone, and kept his extracted teeth in a Capstan cigarette tin. Over time, every one, including my nomadic parents, settled down in Hyderabad which for me now is the "native place" I want to retire to. I love the food, the fact that Telugu is spoken everywhere, and is the city where my mother and brother live.

But here's where the "back home" or "native place" concept falls apart in a modern Indian family. My husband is a Maharashtrian who grew up in Bihar and Bengal, and Mumbai, where we have lived all our adult working lives, is the only place he considers "home". He says wild horses will not drag him to Hyderabad. The food is too spicy, the language unintelligible, and the bosom of my family uncomfortable! I have a daughter who lived all her life in Mumbai until she went abroad. To her, without question, Mumbai is "native place", and "back home", and where she will hopefully drag her kids every year, for as long as we are alive.

(Rama Bijapurkar is a marketing consultant, and author of We Are Like That Only—Understanding the Logic of Consumer India)