ISRO and DRDO must get past disaster launches 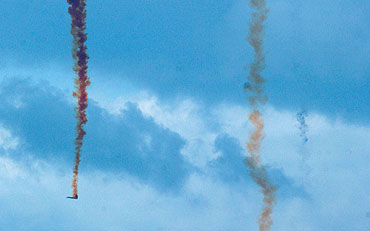 outlookindia.com
-0001-11-30T00:00:00+0553
It was a Black Sunday and an even worse Monday for India's aerospace ambitions. Two much-hyped rocket systems—one a guided missile (Agni-III) and another a launch vehicle carrying a satellite (GSLV-FO2), built by two famed institutions (DRDO and ISRO respectively)—landed in the sea, drowning with it years of effort and hundreds of crores of rupees.

It was a rare back-to-back failure and ISRO chairman Madhavan Nair was forthright on what could have gone wrong: "The pressure in one of the four strap-on motors dropped to zero and did not develop enough thrust, as a result the vehicle veered off the trajectory." He also termed the failure "a rarest phenomena". But an ISRO source revealed to Outlook: "One of the liquid strap-ons had a 'workmanship' problem with the engine valve, leading to a shutdown after one second."

Unlike ISRO, who even after the failure showed a genuine eagerness to share available information, there was total silence from the DRDO. An indifferent defence minister summed up the situation: "The take-off was successful... but there was some problem later." Repeated efforts to talk to DRDO officials in Hyderabad met with no success, though one scientist did say there could have been a "component flaw, but even that would be premature to say".

ISRO and DRDO are actually studies in contrast, two high-profile organisations heavily funded by public money and trying to meet India's goals of self-reliance in critical technology. The difference is, one has learnt from its failures and has a brilliant track record, while the other seems lost. Much of ISRO's talent and innovation has been used by DRDO for its missile programme. "But the spirit and resilience of ISRO was never transferred to DRDO even though conceptually there is proximity between the two," says a scientist who has worked in both organisations.

So what makes ISRO different? Points out ex-ISRO chairman U.R. Rao: "The one great thing about ISRO is that it is extremely open, people are committed, they have faith in themselves and a failure is seen as a learning curve. Our reviews are open." As an official describes it, "Nowhere in the world will you find another organisation like ISRO, everything is done here from end to end. We do R&D build satellites and launch vehicles; meet the specific requirements of our users and also process data."

The database on the 21 launches that ISRO has had in India: they have only had five failures, and the last was in April 1994. A highly respected success average even globally. Coming to DRDO, the missile programme was the only one to have met with some reasonable success. Now with Agni-III's failure, the Integrated Guided Missile Programme (IGMP) started in 1983 has suffered a major setback. This Agni test, say DRDO sources, was supposed to give a technical push to the intercontinental missile programme. "DRDO has got into the problem of talking big and delivering little," said a scientist recalling how in 2003 the much touted short-range surface-to-air missile Trishul was dumped. DRDO had worked on it for 18 years and spent nearly Rs 300 crore. Other missiles in the IGM programme, Akash and Nag (promised long ago and yet to be delivered), have already consumed thousands of crores.

It's ironic that the DRDO was set up to cut down on arms imports via indigenisation. A few years ago, President A.P.J. Abdul Kalam had spoken of 70 per cent self-reliance in defence requirements by 2005. That date and year has passed, and we are still a long way away.

The Cup, The Spill