Going By The Book

Kejriwal prepares for his party’s launch 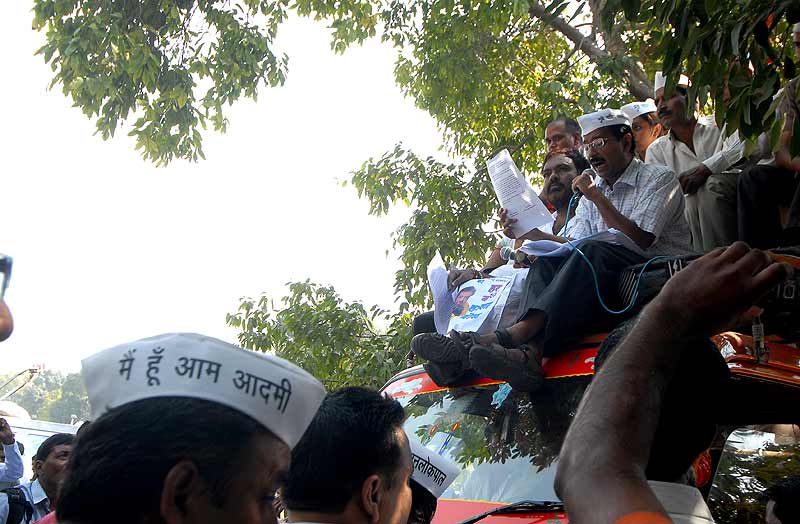 Amidst the lotus and the elephant, the cycle and the lamp, what symbol would best represent Arvind Kejriwal’s party? Though the forum is yet to take a final call on it, the icon being toyed with is a ‘book’. Emblematic of the Constitution, it will best suit the party’s anti-corruption image and commitment to the law of the land.

And what of the name of the new party, to be launched on November 26, the day the Constituent Assembly approved the draft Constitution? What better than calling it the Aam Aadmi Party, since he is what the party stands for. “The idea, say IAC sources, “is to tell people that this is their own party, not the legacy of any family or ideology”. It’s so far the most popular choice among the thousand-odd suggestions, though this too isn’t final.

Meanwhile, hectic preparations are under way for the big day. “It’s a three-day event,” reveals a source. “On the 24th, there will be a day-long meeting with our nation-wide representatives. The next day, our youth wing has planned a rally from Rajghat to Jantar Mantar. This will help us catalyse the Delhi crowd. Finally, on the 26th, we’ll announce our party’s name and constitution.” The announcement of the name will end the wrestling for the ownership of IAC. “From November 26 onwards, Team Arvind will work with their party name and IAC would automatically go to Anna or whosoever wants to use it or claim it.”

An Olympic-style mashaal will start off from Delhi on Nov 26, visit all states, and return to the capital by March 2013.

Nov 26 will also mark the beginning of an Olympic relay-style event, when an IAC torch or mashaal will journey across the country, travelling to all states, their districts, and possibly to the ward and panchayat level. After spreading the party’s message and helping it connect to people on the ground, the torch will return to the national capital. It will end ‘Rang De Basanti’ style on March 23, 2013, Bhagat Singh’s martyrdom day. Delegates from across the country will gather again at Jantar Mantar on this day, when the party will launch its manifesto.

The first big test for the new party will be the assembly polls in Delhi in October 2013. Preparations for that have already begun, with Gopal Rai having already conducted meetings in more than 30 wards of Delhi. “Delhi is the litmus test for us,” says a well-placed source. “It’ll decide our future course of political action: whether we go for nation-wide action in 2014 or do more groundwork, rethink our strategy for a few more years before we go for bigger electoral action.”

However, for all their lofty ideas, not all is going according to plan. For one, ward-level action did not actually work out on the ground, with the national team having to do all the work and the ward-level volunteers themselves staying away. The IAC, therefore, has switched to the new framework of a parliamentary committee. It’ll have representatives from all seven parliamentary seats and 70 assembly seats in Delhi. They have been meeting regularly and Kejriwal himself has been chairing these.

Even getting the symbol for the party won’t be easy, even if it hasn’t been allotted to any party yet. The Election Commission has a due process for the registration, recognition and allotment of a reserved symbol for any political party.

Then there’s the Anna vs Arvind elephant, which hasn’t really left the room. Says an insider from Arvind’s team, “Anna and Arvind themselves have a good understanding, it’s a few people on either side who’re the troublemakers. Kiran Bedi has damaged our relationship with her statements and moves, but we still choose not to stand against each other as it would weaken the entire fight against corruption.” And what of retired army chief V.K. Singh, who addressed a press conference recently? “Talks are on,” says the insider, “but he seems more keen on keeping himself independent.”

There are also differences within the team. “Arvind has a sharp but spontaneous and layman style of working whereas Yogendra (Yadav) is more academic in his thinking and working,” says a core member. “This has created some unease but this should be seen as a strength, not a problem.” Together they have created ripples with the Robert Vadra-Salman Khurshid-Nitin Gadkari-black money exposes. How they shape up beyond this remains to be seen.