Diwali sans crackers, and Ganesha, Durga in clay: festivals get kinder on the planet 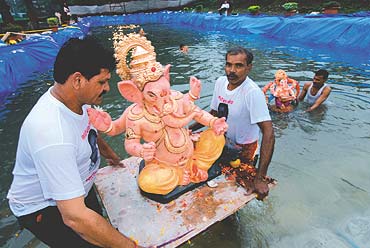 A slow but significant eco-consciousness is transforming Indian festivals. We can celebrate our faith, it seems, without making the planet pay for it. If you're in doubt—ask your children. At Mumbai's Kendriya Vidyalaya 2, a Central government school, a forest of hands waves at you before the

question has even been posed. "Which of you've pledged not to burst crackers this Diwali?" All hands stay up. Ask, "What's wrong with bursting crackers?" and the answers come fast as rockets. "You can go deaf," says one 11-year-old. "You can get asthma," says another 6th-grader. All 150 sixth-grade students have resolved to boycott crackers this Diwali—and to persuade others to do so too.

Kiran Madan and Shabnam Javed, founders of Sanskar India Foundation, have taught their charges well. Their ngo, now three years old, conducts the 'Sanskar Programme' at 50 Mumbai schools, taking 16 modules on environmental and civic values the year round, free of charge, for almost 5,000 children. "Children are far less set in their ways than adults," says Madan. "And they can pressure their parents to change." 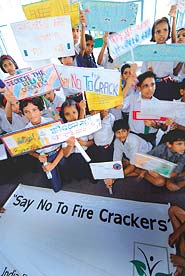 The 'Say No to Firecrackers' campaign extends well beyond Sanskar. The Delhi-based Community Led Environment Action Network (CLEAN) takes the same message to 7th-, 8th- and 9th-graders at 250-odd schools in 78 towns in India.

There are smaller individual efforts. At Aardee Montessori School in the capital, money saved from the non-purchase of firecrackers is used to buy sweets for underprivileged children. At Delhi's elite Sanskriti School, teacher Neeta Ganguly has been running an anti-firecrackers campaign for four years now. Says 10th-grader Akriti Gera, "Real Diwali in Ayodhya was celebrated just with diyas, not crackers."

Holi has already become much more eco-friendly than it was even a couple of years ago. In Delhi and Mumbai earlier this year, even corner grocery stores were offering natural colours made of turmeric, beetroot and henna, while this year's Puja celebrations in Delhi offered prizes for the most eco-friendly pandal—with Durga images of easily-dissolved unbaked clay, painted in non-toxic colours. But Calcutta's image-makers in Kumartuli seem resistant to change—they need lessons from Mumbai in fashioning biodegradable images.

The Ganeshotsav celebrations in Mumbai this year saw the metropolis displaying a new-found appreciation for an age-old material: clay. Navsrujan—formed by a small group of eco-enthusiasts from iit Bombay—has held scores of public workshops since 2003. Drawing students and adults alike, they teach Ganesh followers how to mould the elephant-god out of silt from Powai Lake; this year, 1,900 small clay Ganeshas were made. "What we take from the lake, we surrender back at immersion time," says Saraswathi Krithivasan, research scholar at IIT. "Keeping the balance: isn't that what our traditions are all about?" Navsrujan's future plans include turning clay idol-making into an income-generating project for underprivileged children.

If Ganapati went green this year, it was not without help from local municipal corporations. More than 25,000 small idols were immersed in artificial tanks set up by BMC at Mulund and Goregaon; likewise around 14,000 idols were immersed in a reservoir built by Thane's corporators. About 1,500 trucks full of nirmalaya (flower offerings) were collected by the BMC for vermiculture projects at 24 sites in the city. The morning after visarjan, 3,000 BMC workers and 1,000 volunteers cleaned up the beaches, where the remains of Ganpati idols are typically washed ashore.

For years, both municipal corporations have been consulting iit Bombay on ways to minimise the ecological footprint of idol immersion. Last month, Dr Shyam Asolekar, head of IIT Bombay's Centre for Environmental Science and Engineering, conducted a study on the disintegration process by immersing four 12-inch Ganpati idols—made of Plaster of Paris (PoP), shadoo (or local) clay, lake silt and newspaper pulp—in separate glass tanks. "The Plaster of Paris idol was the worst," says Asolekar. "It showed no change in structure even after 15 days. Clay and silt are better options." Driving this point home will be hard, though, in a state where most of the 25,000-odd Ganesh murtikars work with PoP.

For two years, the design centre has been developing a large papier-mache Ganesh idol. This year, it met with success, creating a 11-foot-tall Ganesh idol out of newspaper. The finished idol, only 35 kg in weight, bears 1,000 litres of water when submerged and disintegrates in four hours, claims Mishra.

If the beginning we have made is any indication of the final outcome, our children may well celebrate festivals very differently from us—sans the sound and the fury, but truer in spirit and kinder on the planet. Now, that's the sort of hope that will let all of us sleep better.