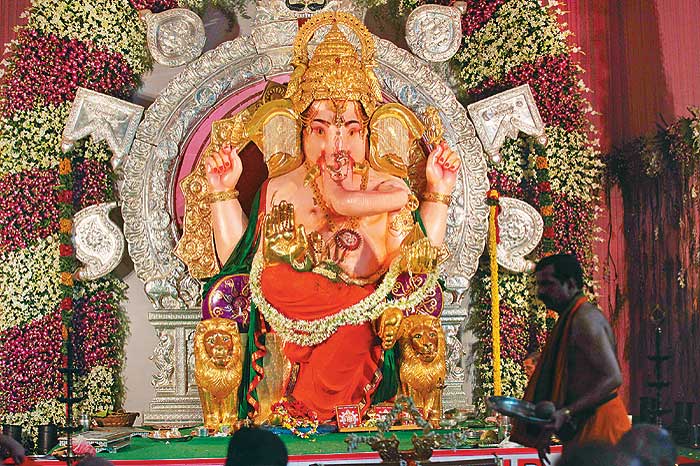 Among the very many sobriquets showered on Ganapati—inarguably the most popularly worshipped deity across Maharashtra—are Vighnaharta and Vighna-vinashak, the remover and destroyer of obstacles. However, in a telling reflection of the times we live in, Ganesh bhakts now believe that they and their lord could do with some insurance cover. And so, as many as 200 sarvajanik Ganesh mandals in Mumbai—the public or charitable trusts that organise the 10-day festival—have bought modest to hefty insurance. That’s a quantum leap from two years ago when barely a dozen had indulged in what had then seemed like a fringe sentiment: insurance for the other-worldly.

“After the 26/11 attacks and this year’s repeated warnings that terrorists could strike during the Ganapati festival, many of our members thought it wise to go in for insurance. We can’t leave things to chance, can we?” asks Pandurang Jadhav, convenor of Birhanmumbai Sarvajanik Ganeshotsav Samanvay Samiti, the apex body of all the mandals in the city. A majority of the estimated 10,000 mandals across Mumbai are relatively small, but around a thousand host the festival on a grand scale with idols rising from ten to 18 feet in height, and attract devotees in lakhs. “It’s the large ones that are under threat,” points out Jadhav.

In a first of sorts, one mandal even insured Ganapati bappa’s devotees—200 of them, Rs 10 lakh each.

The Gaud Saraswat Brahmin Samaj Mandal at Wadala, which displays the richest Ganapati idol in the city, has been insured for a whopping Rs 49.5 crore this year, nearly five times more than its Rs 10 crore cover last year. Lalbaugcha Raja, the city’s tallest and most revered idol, located in the textile mill area of central Mumbai, which saw a million visitors last year, has been insured for Rs 5 crore. Even more modest ones were insured for around Rs 55 lakh to a crore. “We insured the idol’s jewellery (62 kg gold and 300 kg silver), our human resources—1,000 volunteers and 350 guards—and the mandap itself,” reveals Satish Nayak, president of the GSB Mandal.

Pune’s famous Dagdusheth Halwai Ganapati Trust too bought insurance this year. “There’s always a bomb threat. We have hundreds of city police as well as our own private guards to secure the 5,000 sq ft pandal but there’s no harm in taking some insurance,” says Ashok Godse, president of the trust. “Some” insurance meant a cover of around Rs 50 crore with a premium of Rs 4.5 lakh!

In a first of sorts, Nayak insured Ganapati bappa’s devotees as well. “We calculated around Rs 10 lakh per devotee, and have covered 200 devotees inside the mandap, should something go wrong.” Most insurance was sold by state-owned companies, with New India Assurance leading the pack. “We had approached private companies too, but their rules are more stringent,” says Sunil Joshi of Lalbaugcha Raja Mandal. A few insurance-seekers wanted to know, rather audaciously, if “lack of devotees” could also be insured; after all, if terror threats kept devotees away, it would adversely affect mandals’ incomes. It didn’t work. “We have insured every possible aspect but not ‘lack of devotees’; the routine exclusions do apply,” says a senior official of New India Assurance. The routine exclusions include war, nuclear explosions, acts of nature—and, of course, acts of god.