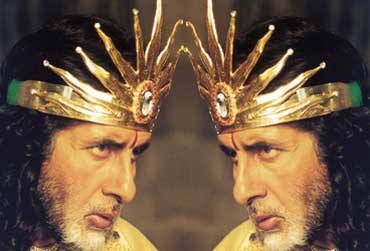 It has turned out to be a pretty busy year for me. Of course, kbc is one of the biggest things to have happened to me during the year. It wasn't anything pioneering that we were doing, we just took a format that already existed and replicated it. We went to England, the country of its origin, met the anchor and I accepted the show.

For me, the transition from films to TV was a tough decision and held its apprehensions—it still does. Cinema is 70 mm, television just a few inches, therefore metaphorically it's a diminishing image; in practical terms it seems a comedown. But I am an actor and if there are six mediums as outlets for this profession, then I see myself as getting associated with just another one. Even abroad, there are some very fine examples—of Dean Martin, a very fine actor, who was doing a serial on TV and also performing on stage, all three at the same time. He performed at Las Vegas with Frank Sinatra, did TV and was a very successful actor.