As the US braces for a battle extended in range and time, differences on how to fight it surface 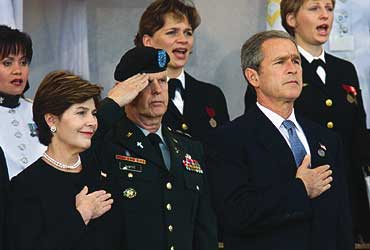 outlookindia.com
-0001-11-30T00:00:00+0553
By the end of the week, it was US President George W. Bush who set aside doubts over the politics of terror. "We want a stable Afghanistan so that neighbours do not have to fear terrorism coming out of Afghanistan," Bush said. With India the obviously worrying neighbour, this was the closest the US president came to declaring publicly that the war on terrorism will also include terrorism aimed at India.

That assertion came while the Bush administration prepared to place at least some of the groups operating in Kashmir on one of its two lists of terrorist organisations. One group certain to be on the list is the Jaish-e-Mohammed, which claimed responsibility for the attack on the Srinagar assembly a fortnight back and which, incidentally, is reported to have changed its name to Tehrik-al-Furqan to circumvent the ban.

Indian demands to list the Kashmir groups have become a growing issue between India and the US. The Kashmir groups cannot immediately be included in the State Department list which is published every two years; the last came out earlier this month. They are now likely to be named on the treasury list of terrorist groups whose assets are frozen with close surveillance placed on their activities worldwide. "The treasury list is no less effective than the other," a State Department spokesman told Outlook.

The inclusion of the groups active in Kashmir in this treasury list is expected "soon", Indian ambassador to the US Lalit Mansingh told Outlook. "It is our expectation that these groups which operate in Jammu and Kashmir will be included in the treasury list and we are hopeful that this will be done fairly soon."

That inclusion is expected to neutralise not just any backing to these groups from Pakistan but their very presence there. The development is imminent following a week when Pakistan has come under what a senior official described as "strong pressure", diplomatese for arm-twisting. Some of that became public when Bush dismissed suggestions made by Gen Pervez Musharraf in his press conference that the military action would end in a few days. "I don't know who told the president of Pakistan that," Bush said.

More telling was perhaps what Bush did not say about Pakistan a day later. Welcoming nato chief Lord Robertson at the White House, Bush publicly thanked many countries for their support to the US in its war on terror. Pakistan, the critical frontline ally, was not included. Bush thanked the Organisation of African Unity members for providing intelligence; he thanked Jordan, Egypt and Saudi Arabia; he thanked specifically nato, the Organisation of American States, China, Australia, New Zealand—but not Pakistan.

The provision of land bases by Pakistan after this omission is a sign that the US administration is leaning on Pakistan quite heavily. India, on the other side, is being asked to play a waiting game. That principally is what Secretary of State Colin Powell's visit this week will be about.

When asked specifically about Kashmir, Powell said that it will be discussed. But ambassador Mansingh was firm that discussions will not take on the tone of any American role in the dispute. "The US administration has made it absolutely clear that they do not see a role for themselves in Kashmir and we have made it clear that the issue of Jammu and Kashmir is a bilateral issue between India and Pakistan and it will remain so," Mansingh told Outlook. "I don't think there is any ambiguity over this point."

Powell is expected to urge Indian leaders to avoid rushing into any action now. "When the focus is on bin Laden, India must cool it in Kashmir," Dennis Kux from the Woodrow Wilson Center, Washington, told Outlook. "The State Department has said they will not overlook Pakistani support to insurgency in Kashmir," says Kux, author of The United States and Pakistan 1947-2000: Disenchanted Allies, one of the most comprehensive books yet on American relations with Pakistan. "You have to handle things one at a time."

Kux also says that India should be content with the present leadership in Pakistan. "The worst thing is not happening now, that would happen for India if as a result of these battles on the streets there is a change in the leadership of the Pakistani army," he said. "That is not likely but it could happen. Musharraf has made a total turnaround in his policy on Afghanistan, if he does this on Kashmir now he will be out and that won't be any good for India." The logic of events to follow, he says, will lead inevitably to action against Pakistan-backed terrorists.

There's also reason for India to feel happy about Deputy Secretary of State Richard Armitage's statement that while Pakistan was the frontline state, Indian support to the US is 100 per cent. He said the Indian message to the US had been: "Anything the US needs—anything—you've got." Armitage said this was a "pretty bold and gutsy statement".

Armitage also said Powell was looking to see that India and Pakistan keep the peace over Kashmir to ensure the focus remains on the campaign against Al Qaeda.

The logic of the action is now being led increasingly by Powell who is steering policies away from stealth in the air to stealth on the ground. Powell had opposed any military strikes in Afghanistan in the face of the group cohering around Defence Secretary Donald Rumsfeld that came to be called the hawks. But in the wake of what hit America, there are no hawks and doves in Washington; merely hawks who wanted to pounce and hawks who wanted to bide their time before pouncing.

Divisions, though, have clearly emerged between Rumsfeld, who is leading the decision on bombing, and Powell. There were indications towards the end of the week that Bush is beginning to have some doubts about the bombing of Afghanistan and asked for new thinking on a conventional military approach against an unconventional enemy. At present, the bombing continues with simultaneous preparations for in-and-out raids by special forces.

Powell has read his history; Afghanistan's is a history of the unvanquished, but it's a history also of betrayals. Powell prevailed at least partly in his policy of provoking a slow implosion rather than bank solely on the wasted machismo of bombing the hell out of 'em. Powell held up the example of the Pakistani who betrayed the earlier World Trade Center bombers and became the richer for it. "We want this story repeated everywhere," he said. Powell talks very little about any bombing. To Powell, the most powerful weapon in this new war seems to be the dollar. For the 22 most wanted fugitives now named, the reward is up to $5 million a head. And luxuriant retirement in America. As Powell sees it, bribery could win this war better than bombing.

President Bush's offer of a second chance to the Taliban to give up bin Laden is yet another new stealth weapon to break up the Taliban, if not bin Laden's ring. So is the new diplomatic ties offered between American and Afghan children.These are long shots against bin Laden but still the best bet for America against an enemy that seems at ease as much in caves as in cockpits.

Powell moved also to take the focus away from just bin Laden. America had at first needed an identifiable enemy and the diplomatically clueless Taliban obliged. Under cover of the need to target a broader network, the Americans are clearly moving into a position where they would not be judged by their ability, or more likely inability, to find that one single man. Little surprise that in Washington Powell gets louder applause than Bush.

"Such moves are necessarily slow-moving and everything depends now on how much longer bin Laden can hold out and how far Musharraf can keep control with American troops on Pakistani soil," says an Indian official. Washington is mounting pressure on India to stay out of it in the first phase of the war. But with no one sure how the first phase will end and when, no one's thinking of the second phase yet.