Goa's beaches and slums are the better for Jan Ugahi's work 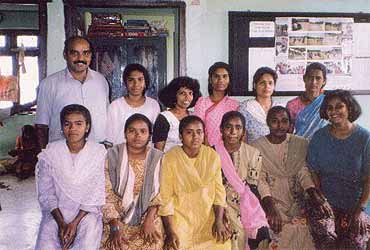 outlookindia.com
-0001-11-30T00:00:00+0553
It’s a fairy tale success story. Gosby used to be a mendicant, of the Sakir begging community. Members of the group do the rounds of the shops, especially during the month-long Ramzan festival, and are considered to be a nuisance by the general public. Gosby, at the tender age of nine, was just another frail, dishevelled beggar-girl. Then, Jan Ugahi happened in her life.

After six years, the transformation is unbelievable. Gosby, now 16, speaks fluent English, has just passed her Xth Class through the National Open School (NOS) and is now a trainer-teacher, handling the literacy programme at Jan Ugahi. Today, she is confidence personified, determined to change the lives of the many unfortunate children like her.

Jan Ugahi, a public charitable trust, was started by Greg and Bernie D’Souza, a couple from Margao, Goa, in January 1995 with the sole purpose of bringing some sense of dignity to the lives of the shanty dwellers. As Bernie puts it, "They’re a most exploited lot. Margao, the commercial capital, has got it bad, with the mushrooming number of slums." Jan Ugahi, which means "People’s Realisation", works with the marginalised backward classes—women and children from the slums, labourers, domestic workers, sex workers.

Taking into consideration their specific needs, Jan Ugahi has programmes for each segment. For disadvantaged school children they take supplementary classes while street/working children get a more non-formal education. It’s also active in cases of children in distress situations like sexual abuse cases.

For women, adult literacy classes are organised with informal sessions, workshops, street plays and even a newsletter to generate awareness about issues like reproductive health and fertility. Jan Ugahi has also started some self-help groups, like Swadhini for vocational training (tailoring, batik-tie dyeing, paper bags) and Sahayog which extends savings and credit facilities.

The D’Souzas had earlier worked with displaced tribal people in Bihar and in Madhya Pradesh with the Narmada Bachao Andolan. Bernie recollects that they started Jan Ugahi with practically no money or manpower. An old sewing machine and cloth was donated by a friend to help the women learn to stitch. "Initially, we were more service-oriented than issue-oriented," says Greg. "The enthusiastic response from the slum people encouraged us to do more."

What is amazing is that those who had come to the shelter for literacy classes have themselves now gone on to become teachers, trainers and co-organisers of various programmes. Last year, Jan Ugahi had 206 children in their literacy classes. In 1999, 21 children were given medical help, 27 given shelter and the same number rescued from physical/sexual abuse. Most of the children belonged to Andhra Pradesh, Maharashtra and Karnataka.

The organisation’s particularly active in the case of the ‘train sweepers’, the homeless children aged 8-14 who work to keep train bogeys clean. Most of them also indulge in some form of substance abuse. Classes, games and social activities are organised for them at the centre to encourage community bonding. An annual one-month summer camp is also organised at the Rajendra Prasad Ground here, with over 500 kids registering for it last time. Says Bernie, "It encourages the children to not indulge in matka or gambling, which slum children are prone to. They are given loads of prizes for participating."

But perhaps Jan Ugahi does its most important work for child abuse victims. Goa, being a tourist destination, has gained some notoriety in this regard, especially with regard to foreign tourists. The Beach Project, hence, has even more significance. "We alert the locals and shack owners about child abuse on the beach or paedophiles. Children working as migrant labourers are the most vulnerable. We also counsel the children on who and what to be wary of," says Bernie. Recently, a four-year-old child found drugged on the Colva beach (one of Goa’s well-known beaches) was rescued by its crisis intervention helpline, Childline.