Goan With The Wind

Malgonkar is freeze-framed in the 16th century. Mario has the real thing. 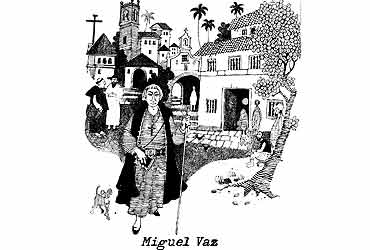 Inside Goa
By Manohar Malgonkar
Architecture Autonomous Pages: 199; Rs 695
The long-awaited second edition of Manohar Malgonkar’s Inside Goa, with captivating illustrations by Mario Miranda, invites immediate attention. It has a cut-out of a uniquely Goan window on the front jacket. This traditional window with delicate shells set in a wooden frame give a Goan house its individuality. When shut, say, against strong monsoon winds, its translucence creates a luminous glow. The passerby pauses and wonders at a beauty and symmetry so different from the cold transparency of glass panes. The jacket’s open window reveals Mario’s lively representation of his Goa.

First published in 1985, this was among the first coffeetablers on Goa. This new edition with more chapters and illustrations retains much of the original style: it offers only an entrancing bird’s eye view from outside the window. However, Mario’s artistry reveals interior spaces—portraits of rulers, colonisers and preachers, people and their way of life, their professions, their gods and demons, the varied architecture of house, temple, church, and most enchanting of all—with wit and a sense of lived experience—village scenes, the kitchen and the market place.

Malgonkar is at his best when evoking the glory of a dead past, descriptions of temples and churches, wars and invasions, and the lusciousness of the few forests left untouched by mining. The skilled novelist’s art creates a gripping narrative of life in Golden Goa which shone briefly in a few square miles of the territory many centuries ago. Here his imagination and his prose are in full flight, skimming past the Goa that Goans have cherished across the centuries. Saucy fisherwomen haggle and bargain among the strutting fidalgos of 16th-century Goa brought there perhaps to complete and give some fullness to the imagined scene.... New chapters on conversion, a potted history of the Jesuit order with morbid emphasis on the self-inflicted flagellations of St Francis Xavier add little to a deeper understanding of Goa but reiterate the stereotypes.

But what of the Goa which lives in its villages? The Goa of the ganvkari, a commune (communidade) system that sustained community cohesiveness during the worst periods of its history? Malgonkar is clearly an addict of historical romance citing Alexandre Dumas and Walter Scott to illustrate his experience of the Goan scene leaving Mario to ground realities. And indeed it is the illustrations with their sharp-edged realism and humour that redeem the book and make it a collector’s delight.

Nearly half the book is about the embattled or the lavish past with conflicts between Church and State in which only a handful of Goans had a presence, and a sporadic exploration across the river, where those who fled the processes of conversion sheltered, and built a new life. The other half reveals a Goa uninhabited except by a few, with unmotorable roads, eerie silence, and the adventurous octogenarian revelling within a landscape off the beaten track, amid jungles he clearly loves. Although there is new material on the Hindu families who survived religious repression, with skills of survival honed in exile, to return and acquire economic power great enough for the government treasury to have to borrow from some of them, there is little updating of the political scene except for the Ranes of the late 19th century. They certainly did give the Portuguese a hard time fighting for their feudal rights but their raids had little to do with freedom for Goa. And although the stalwart Luis de Menezes Braganza is celebrated, Malgonkar does not suggest the intellectual ferment of those times—the Hindu reformers, the Catholic politicians and crusading journalists from both communities.

The blurb describes the book as a "must read for the Goan diaspora across the world...also for their children to get a sense of their roots". Surely the roots of the Goan diaspora and their children do not rest in the imagined life of 16th- century Golden Goa. What is most troubling is Malgonkar’s insistence on the excessive Portuguese male presence in Goa, so many that Portugal itself seems to have run short of men if one is to believe his account. And the extraordinary idea that "....Once (the Goans) had crossed the barrier from Hinduism to Christianity, they too, shared in full, Goa’s new-found prosperity."

Malgonkar ends with a fairly detailed account of the history of the railway link to Goa, the construction of the Konkan railway and an evocative description of the Dudhsagar waterfall which is "quite literally the first thing in Goa that those who come by train see...it breaks into view with the startling suddenness of an intercut in a mystery film." As ever, here too the writer of historical romance is at work.