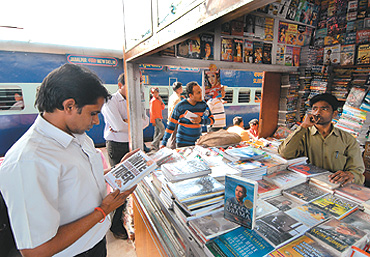 outlookindia.com
-0001-11-30T00:00:00+0553
Bookstalls, like jostling crowds and haggling coolies, have always been a familiar fixture of railway platforms, little oases of calm amidst the frenzied flurry of departures and arrivals. Until recently, what they offered, apart from magazines, was predictable, limited fare—pulp fiction, syrupy romances, thrillers, self-help titles. The train traveller, faced with the prospect of mind-numbing hours of boredom on a journey, especially a daytime one; or the impatient visitor waiting on the platform to receive someone whose train was delayed, would head to the stalls keeping their expectations low. They'd have to settle for a Danielle Steele, a Mills and Boon romance, a John Grisham cliffhanger, a Jeffrey Archer page-turner, a Khushwant Singh Joke Book, one of those hoary old perennials like Dale Carnegie's How to Win Friends and Influence People or Ayn Rand's The Fountainhead.

But there's been a change over the past year. Railway bookstalls across the country have had a makeover, thanks to new marketing tactics by publishers and those in the book distribution trade, driven by what they perceive as the changing profile and reading habits of the railway traveller. A quick browse at the bookstall at the New Delhi station reveals Amartya Sen's Argumentative Indian rubbing shoulders with Mario Puzo's Godfather; Amitav Ghosh's Sea of Poppies flanking Suketu Mehta's Maximum City; Aravind Adiga's and Kiran Desai's Booker-winning titles White Tiger and Inheritance of Loss cheek-by-jowl with that old Bates' guide on how to improve your eyesight without glasses (though some would say it would need more than better vision to plough through these two tomes).

It's a similar scene at the chain of railway bookstalls run by A.H. Wheeler & Co across North India, and at Higginbotham's stalls at Chennai's Central, Egmore and Tamboram stations, where you could well find authors like Manjula Padmanabhan, Nandan Nilekani and Ramachandra Guha, and the memoirs and biographies of Barack Obama, Oprah Winfrey, Albert Einstein, alongside staples like Robin Cook's medical thrillers and competition guides.

Publishers have stopped looking at railway bookstalls as an insignificant little cottage industry. "The sheer volume of passengers who pass through platforms makes railway bookstalls an important destination on the publisher's map," says V.K. Karthika, publisher and chief editor of HarperCollins India. "We're pushing the stall owners to stock more books and more genres." More fast, comfortable, daytime trains connecting major cities have helped transform railway bookstalls. Says Anantha Padmanabhan, vice-president, sales, Penguin India, "The profile of the railway traveller has changed—especially those who travel by Shatabdis. They are educated, middle-class professionals. And more of them are travelling by train than ever before. Publishers are eager to catch their eyeballs."

"Our pick of titles reflects today's market reality," says Arvind Sharma of A.H. Wheeler & Co. "Authors who do well in the market find a place in our stores—whether they write bestsellers or more serious fiction," agrees M. Raju, manager of the Higginbotham stores at Chennai. "Railway bookstores are tuned to customers' demands. If Aravind Adiga's White Tiger and Vikas Swarup's Q&A or Amartya Sen's Argumentative Indian are doing well in the market, we make sure they are available to our customers when they step on the platform."

With choices for book-lovers about to embark on a train journey steadily getting more expansive, the romance of rail travel is all set to get rosier. Next stop on this literary journey may well be bookstalls or libraries aboard Rajdhanis and Shatabdis. Lalooji, are you listening?

By Vineetha Mokkil with Pushpa Iyengar