Glint From The Past 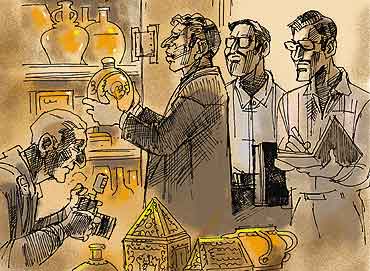 Jayachandran
Jaideep Mazumdar September 12, 2005 00:00 IST Glint From The Past

outlookindia.com
-0001-11-30T00:00:00+0553
It was a scene straight out of a kitschy Bollywood thriller: a wood panel slides open to reveal a hidden door, leading to a secret strongroom with steel safes and teak chests. And from one of these tumbles out hundreds of gold coins and artefacts, some dating back to the Gupta, Maurya and Mughal eras. The four special officers appointed by the Calcutta HC to make an inventory of Priyamvada Birla's assets were, naturally, stunned at their discovery on August 31.

The treasure trove's discovery was the outcome of the inheritance battle between the Birlas and Priyamvada's lawyer and confidant Rajendra Singh Lodha after the former's death on July 3, 2004. Lodha produced a will, purportedly penned by Priyamvada—the widow of M.P. Birla—in 1999, bequeathing all her personal assets and those of the huge M.P. Birla Foundation that runs hospitals, schools and other establishments, to Lodha. Members of the Birla family challenged the will and produced an earlier will of 1982 executed jointly by Priyamvada and her husband leaving all the assets to five trusts to be managed by the family.

The row finally reached the Calcutta HC and since there was considerable dispute over the value of Priyamvada's assets, the court appointed four special officers in March this year to make an inventory. They were not aware about the existence of the strongrooms till N.G. Khaitan, the Birlas' lawyer, told them about it. Lodha produced the keys to the rooms only after that but said he didn't have the keys to the almirahs and chests. Locksmiths had to be called in to break open the first almirah from which the coins and artefacts were found. Three other chests will be opened in the presence of representatives of both the warring parties. The value of this treasure is said to be no less than Rs 1,000 crore. "This discovery just proves our point that Lodha has been trying to conceal Priyamvada's assets," says a source close to the Birlas.

The legal battle aside, Tuesday's startling discovery raises many legal queries. According to the Ancient Monuments & Sites Act, 1958 (amended in 1992), and the Antiques & Art Treasures Act, 1972, all articles more than a hundred years old have to be registered with the registration officer of the state archaeology department. Enquiries revealed that M.P. Birla, an avid collector of coins and antiques, never bothered to do this.

A senior official of the state archaeology department told Outlook: "A private citizen can collect old coins or antiques. But it has to be done according to the law. Such a collector would have to register each and every article, produce documentary evidence of how he procured it and adhere to guidelines regarding storage and display of such items." According to him, the state conducts periodic inspection and the collector cannot move the items to another location without prior permission. Also, the collector would have to clearly mention in his or her will to whom the collection is being bequeathed and this would also have to be approved by the state. If there's no such will, the collection becomes the state's property.

The Birlas or Lodha would clearly not get the treasure. The state archaeology department is keen to lay its hands on the ancient coins and artefacts. "We're waiting for the inventory to be ready and will request the court for a copy. We'll then submit an application for all the antiques to be handed over to us," says the official. Since these were never registered with the archaeology department, the government will not have to pay any compensation to the legal heirs of Priyamvada, be it the Birlas or Lodha. In fact, the government can impose a stiff penalty on the estate (Priyamvada's assets) for not registering the coins and artefacts, say lawyers.

My Next Car Is A Bike!