Gladiators In The Data Ring

Jio’s entry has shaken up Indian telecom, ­forcing other players to opt for mergers to stay in the game 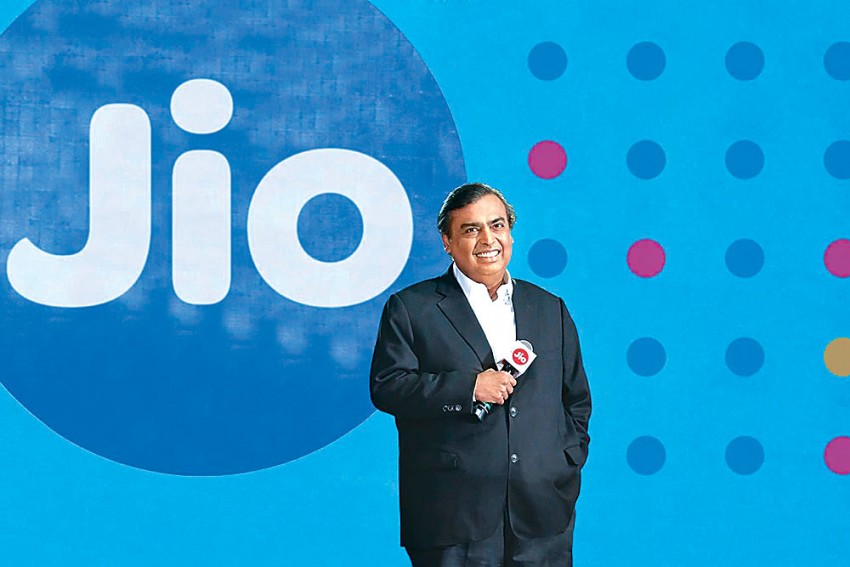 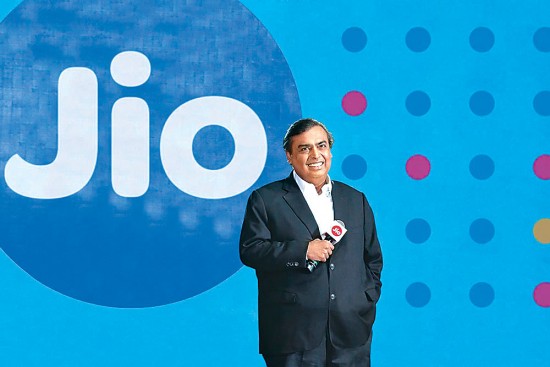 On the sidelines of the Mobile World Congress in Barcelona last week, Bharti Airtel promoter Sunil Mittal pushed other telecom players in ­India to go for consolidation in the dog-eat-dog competitive telecom market. Mittal’s desperate call came just a couple of days after his company Airtel announced the ­acquisition of Norwegian telecom company Telenor’s Indian operations.

Last month, India’s number two and number three players Vodafone and Idea Cellular announced a proposal to merge to create the largest telecom company in the country. This is by far the largest consolidation move in the history of Indian telecom.

Over the last year or so, pushed by low revenues and losses, telecom companies have been desperately looking for a way to make the numbers look good. Most of the smaller players have either shut shop or exited, while the rest have merged with bigger companies to consolidate operations. Now even bigger companies are joining hands to consolidate the sector in one of its worst times. The coming of Reliance Jio with free ­offers has made things worse.

What was a market with 12 players two years ago became one with seven or eight and, now, we are moving to a situation where there would be just three or four. “The market was fragmented as the 12 players ­indulged in primarily tariff-based competition with lowering of tariffs in a race to the bottom,” says Arpita Pal Agarwal, partner and leader, Telecom Industry Practice, PricewaterhouseCoopers India. ­“Other than pricing, there was no serious differentiator in service. At the same time, the spectrum auctions resulted in huge outlays by the operators, which hit them financially. There was financial stress and debt as a consequence of both market tariffs and spectrum-­related cost pressure.”

In this fiercely cut-throat market, revenues have been hard to get by and profits have almost disappeared. Numbers for the top three—Airtel, Vodafone and Idea Cellular—have not been great. The way most companies were being run was no longer financially viable, making consolidation imperative in the industry in order to allow companies to explore operational and financial synergies and get rid of the mounting debt.

The numbers do not look good at all as operations are bleeding. Most players have been operating on a low average revenue per user (ARPU) model, which too has been on a decline. Airtel, for INS­tance, has an overall ARPU of Rs 170 per month, while for the bulk of its customers, the ARPU is of around Rs 90-100.

At the end of the last December quarter, the revenue for the top three telecom companies was down year on year. According to reports, the adjusted gross revenue (AGR) for Bharti Airtel fell 8 per cent, Vodafone saw its AGR go down by 5.1 per cent and that of Idea Cellular fell by 4.9 per cent, while the overall AGR of the telecom industry in India fell by 5.9 per cent. Airtel also recorded its lowest profit in four years in the quarter.

On top of that, the industry is nursing a huge debt burden of around Rs 4.7 lakh crore and the recent spectrum auction has put further financial burden on them. Airtel, for instance, has a total debt of $14.34 billion.

In this scenario, any further growth of voice-based services did not look possible. Currently, 72-75 per cent of the revenues of leading players comes from voice. And voice penetration is almost complete in India with a total wireless population of 1,127 million, of which 988 million are active users. In other words, almost 98 per cent of the population is already covered with voice. 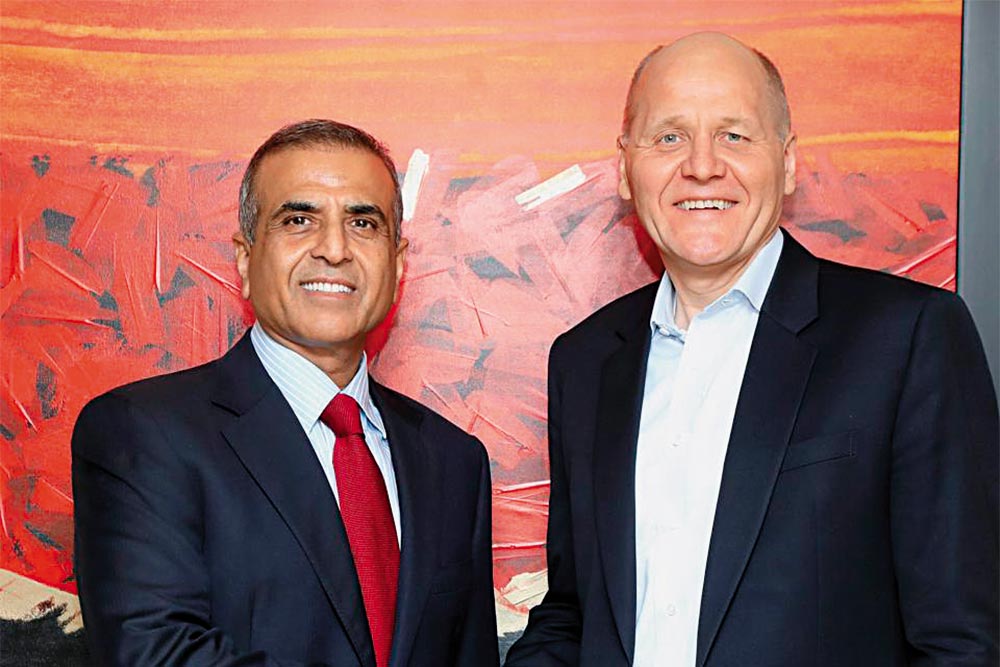 The entry of Reliance Jio Infoc­omm last September was perhaps the last push that has cornered all companies, looking for ways to combine forces and take on the might of the newcomer. In fact, experts agree that a large part of the consolidation has been forced by Jio’s entry and the model it ­follows. “The consolidation has been pushed significantly by Jio, which is not just a new competitor as it is not based on a similar model,” says Shobhit Khare, co-founder of Inertia Wealth Creators. “Jio seeks to entirely shift the way business is being done. Everything from Jio is disruptive. No operator thought of free services for six months.”

According to market research age­ncy India Ratings and Research (Ind-Ra), the telecom industry in India lost about 20 per cent of its revenues due to Jio and its free services. The agency also revised its sectoral outlook to negative from stable due to inc­reasing competition. “The negative outlook reflects Ind-Ra’s expectation of longer and deeper than expected deterioration in the credit profile of telcos following the extended free services by Jio,” the agency said. 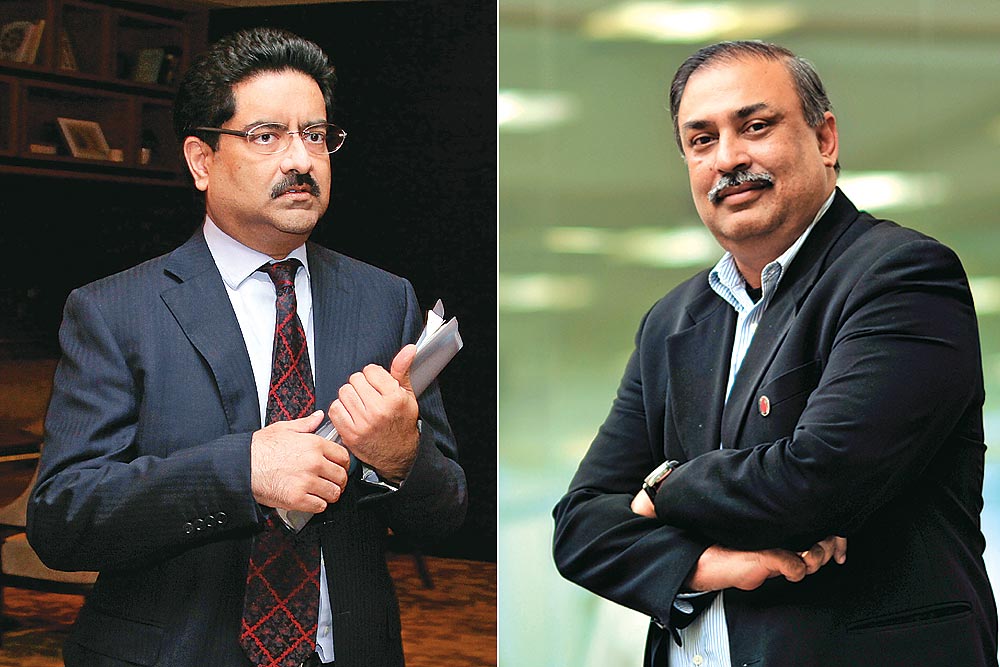 “Consolidation in the telecom sector has been on the cards as it is not possible for the market to support 10-12 players. Jio’s launch has acted as a catalyst to expedite the same,” says Agarwal.

Jio came in with a different proposition where voice was given free for life and revenue for the company would come from data. While the first six months have been offered free, the company will shift into its revenue model next month when it starts charging its customers—beginning with a minimum ARPU of Rs 300, which is way above the industry average so far.

What has hit incumbent players is that while they face uncertain growth in voice, there is an open market for data as India’s data penetration is still very low. There are 346 million internet subscribers in India today, of whom just 192 million are on broadband and use 3G and 4G. “The market is far from saturated in terms of data offerings,” says Agarwal. “On a per capita basis, data consumption is still at nascent levels in the country.” The incumbent players have made significant investment in data, but their primary operations are in voice while that of Jio is primarily in data.

A market with 12 ­players two years ago became one with seven or eight and is, now, moving towards having just three or four.

The proposed Vodafone-Idea Cellular merger would create a formid­able entity to take on the current market leader Airtel, which, with the takeover of Telenor, will gain another two per cent market share. The other big combine would be Reliance Communications, which announced a merger with Aircel and Sistema Shyam’s MTS last year. So we are likely to have three major players leading the game with a market share of 28-30 per cent each—Vodafone-Idea, ­Airtel-Telenor and Jio—with R-Com-Aircel-MTS coming behind. The other players are BSNL and Tata Teleservices (which, after its settlement with Japanese telecom major DoCoMo, may enter into another strategic arrangement with the company). But it is only a matter of time before Tata joins one of the three blocks to consolidate the industry further as running alone in this market may not be viable.

“The bigger players will gradually acquire the smaller ones as it will be difficult to sustain individually,” says Rishi Tejpal, principal research anal­yst at Gartner. “We believe that eventually there will be place for five players, including the government player BSNL. Smaller players with operations in a few circles will not exist.

The mergers would help the compan­ies pool their resources and fight the might of Jio, which comes into the ring with deep pockets. “If these companies come together, they will be able to manage their ­operational expenses more effectively and that will help them boost their margins by bringing in economies of scale,” says Tejpal. “Spectrum will get clubbed and they would be in a position to give better data rates. Operation costs will come down and a lot of duplication will go. ­Spectrum-sharing and trading will come in and redundancy will go.”

In the new paradigm, however, the telcos will have to find a new business model as their market share is likely to keep going down as voice, in the new Jio-led horizon, will keep sliding.

It will probably take another two to three years for the mergers to stabilise and for the impact of the consolidation to be visible on the companies’ financials. By then Jio would also get stronger and closer to the critical mass it is looking for to justify its investment and garner a market share of about 20 per cent. Going forward, it will be a data game that the big combined ent­ities will have to play. Of course, Jio has a head-start but the others, with combined spectrum and resources, will make it an interesting game.

‘A Fake Judge Is A Theoretical Possibility’