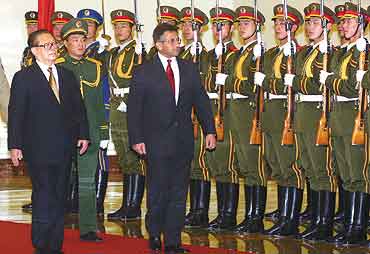 outlookindia.com
-0001-11-30T00:00:00+0553
It isn't the first time Islamabad has had to listen to New Delhi indulge in war mongering and the incessant clamour for crossing the Line of Control (LoC). Islamabad has always taken such threats from across the border with equipoise. But what is a trifle worrying this time round is that Pakistan, as an important frontline state in America's war against terror in Afghanistan, has stretched itself thin on its western borders and, simultaneously, faces an Indian government that could resort to aggression to strengthen its slipping grip over power at home.

Hitherto, a friendly government in Kabul allowed Islamabad the luxury of manning only the hostile borders with India in the east. But America's war against terror has, as one report points out, pushed General Headquarters to deploy nearly 50,000 regular Pakistan army troops and another 1,50,000 paramilitary soldiers in the west, in the hope of blocking Al Qaeda recruits from slipping in. Couldn't India exploit this situation to its advantage?

Yet Washington's interest in the region is precisely the reason why most in Pakistan feel Indian Prime Minister Atal Behari Vajpayee's tough talk post-December 13 attacks couldn't have been more poorly timed. Reason: Washington simply can't allow an Indo-Pak war to complicate its engagement in Afghanistan. Nor can India, it is believed, defy international opinion to attack Pakistan at this juncture. No wonder former foreign secretary Najmuddin A. Shaikh says, "Islamabad should continue to play it cool and ignore the jingoism emanating from New Delhi."

Worried Islamabad may not have been, but it didn't lose time to put its troops on high alert. Islamabad's caution stemmed from the belief that Vajpayee could indulge in brinkmanship to bolster his party's chances in the crucial Uttar Pradesh elections slated for March. On December 14, 24 hours after Indian Parliament had been attacked, General Pervez Musharraf and his advisors went into a huddle to fashion their response. To begin with, Pakistan offered a joint probe into the identity of those organisations allegedly responsible for the attack.

But there was also a military aspect to Islamabad's response. A senior military officer who attended the conference told Outlook, "The conference approved the essential steps to be taken, because of the tension India is trying to create. Though there is little chance of it opening fire on the international borders, there is a possibility of India indulging in misadventures on the LoC."

Most here feel Islamabad showed tremendous maturity in handling last week's crisis. In reality, though, it was Washington which ensured that the acrimonious exchange of words didn't snowball into armed conflict. Says a senior army official, "President Musharraf specially called secretary of state Colin Powell to inform him that any military action from India would be taken by Pakistan as an act of war. He told the Americans that Pakistan would act against Pakistani groups or individuals if the FBI independently confirmed that Pakistanis were involved in the terrorist action. In managing the crisis, folks at the Pentagon and the state department also lost some sleep with us. Without US intervention, the situation could have turned very nasty."

It seems Washington worked out some kind of quid pro quo for each party—India wasn't to undertake retaliatory action, and Pakistan was asked to hasten its crackdown on terrorist groups operating from its soil.

The war clouds may have blown over, but many here are surprised at New Delhi's outright rejection of Islamabad's rare offer of cooperation in determining the identity of the organisations responsible for the attack. As former foreign minister Sartaj Aziz says, "The first step for India is to accept Pakistan's offer. Or else the Indians should share the information that they have with the US or other western countries New Delhi feels comfortable with. In case Pakistanis are involved in the attack, then Islamabad could take action against those organisations behind the attack."

Islamabad's offer, Aziz and others feel, wasn't made to score brownie points. For one, they say Islamabad is quite conscious of the change in world opinion against those who take to arms for a cause. Two, Musharraf appears sincere in cracking down on the jehadis. As former foreign secretary Niaz Naik argues, "Pakistan has already joined the world coalition against terrorism and if it says it is ready to cooperate with India on this issue, why is New Delhi stalling the process? I think Pakistan wants India to take positive action."

This school of thought consequently feels India should have accepted Musharraf's offer of a joint probe and strengthened his hand against the jehadi organisations. They feel that the military regime can't take action against organisations alleged to have masterminded the attack just because India says they are guilty. Any action on New Delhi's unilateral command could have severe consequences for the Pakistani government, perceived as it would be then to have acquiesced to India. A joint probe was the way out of the logjam, it argues.

India must realise that Pakistan's attitude to terrorism has changed, particularly post-September 11. The intelligentsia, which in many ways fashions opinions and even influences government's policies, is forthright in accepting the need to root out jehadis. As Shaikh points out, "It must be realised that a sea change has occurred in the attitude of the gallery to which India is now playing. It must also be recognised that the pace of change within Pakistan, basically President Musharraf's decision to deal with extremists, must be hastened not because of Indian demands but because this is our internal need."

But the military regime feels it will be impossible to fight terrorism in India unless Vajpayee displays sincerity and accepts that there is a link between acts of terror and the freedom struggle in Kashmir. Shaikh argues, "It is not easy for Pakistan to try and get rid of militant groups belonging to different religious parties in the country. These have often been linked to helping the Kashmiris in their fight for liberation. Shouldn't Vajpayee, if he is sincere, go out of his way to cooperate with Pakistan? Or is it that it is easier for him to push aside the Kashmir problem and just talk of attacking Pakistan to please the hawks in India?"

In other words, India has to be ready for a quid pro quo—resolving the Kashmir dispute in return for Pakistan crushing terrorism.