'Give Me The Evidence'

The former union telecom and communication minister, accused in the 2G multi-crore spectrum case, is optimistic of winning from the Nilgiris constituency in Tamil Nadu 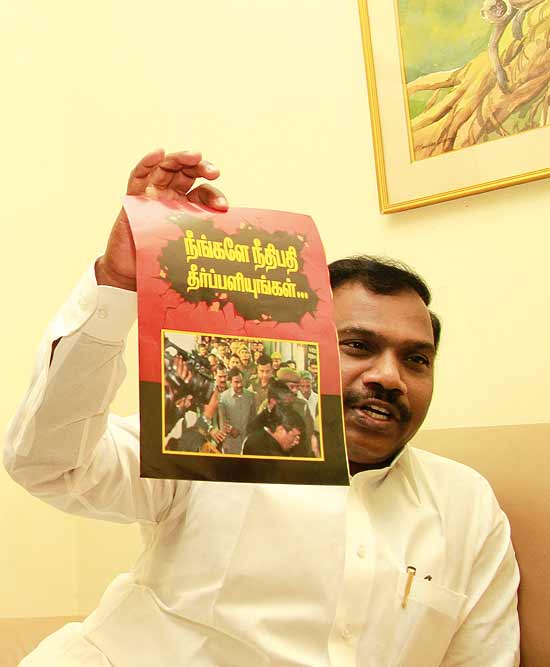 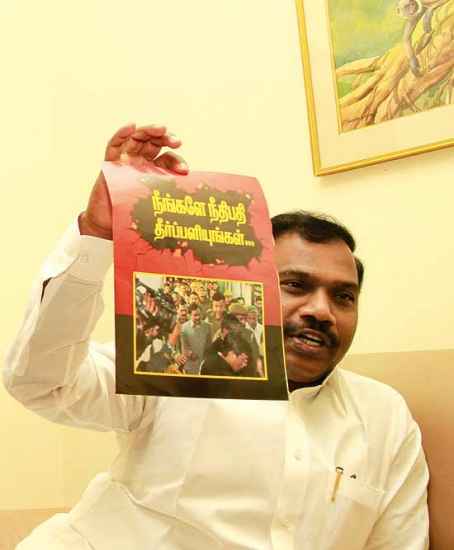 The former union telecom and communication minister Andimuthu Raja who is linked to the 2G multi-crore spectrum case, is optimistic of winning from the reserved (SC) Nilgiris constituency in Tamil Nadu for a second time in a row. Outlook caught up with him at the base of the Nilgiris ghats, in Mettupalayam, while he was buttoning the cuff of his full length white shirt, readying to set off on his campaign trail up the hills to the villages near Coonoor. Graciously he sat down for a chat and was at pains to explain how he had become a victim of the difference of opinions—that of the law ministry and the CBI.

Minu Ittyipe: What are your chances of winning the elections?

The opposition say you have spent 15 months in jail and there are is no way you can win here again.

I am making it an issue. Here is my pamphlet where I have put the picture of my arrest and the details of what happened in the court. I am not evading the case.  I am asking: Is it true? You believe me or don’t believe me. Give me the evidence. I have classified it into two. The court of law is the Indian court. The court of justice is my constituency. I am asking the people to give me justice. What is the evidence gained so far? There is no DA [Disproportionate Assets] case against me. It has been admitted by the CBI. Income Tax and CBI combined investigation was done on Raja and Raja’s extended family both abroad and domestic and they did not find anything so there is no DA case. Subbarao, finance secretary, says there is no exchequer loss as per the policy—it was discussed with the prime minister. It was approved by the cabinet and the parliament.  The case is going on whether ineligible companies were given eligibility to get the spectrum. Now whether the eligibility is correct or not is being disputed by the law ministry and the CBI. The law ministry says they are eligible, the CBI says they are not eligible. It is an opinion fight going on between these two and unnecessarily I had to spend 15 months in jail.

That is misleading. I am the only MP maintaining two offices one in the hills and the other in the plains in Mettupalayam. I have two assistants. Every month I am touring the place. Every fortnight I come here. Only because of the trial some visits have been curtailed.

S Gurumurthy, the candidate of the BJP, was disqualified for his nomination paper was incomplete. Can you comment on that?

I do not want to comment on that. I don’t want to rely upon the weakness of any other candidates. I want to stand on my own strength—on my performance. What I have done for my people when I was MP and Kalaignar (M K Karunanidhi) was chief minister? The poor performance of the state government is an issue.

What are your major achievements?

You ask the people and tell me. The entire Nilgiris was affected by natural calamities and was cut off for 10 days (In 2009, over 100 landslides in the Nilgiris had cut it off) and the roads were completely destroyed and there was no electricity. There was no food, no transportation, no petrol, no diesel and 10,000 people were sheltered in the schools without houses. I tackled that within one month and rectified the problems. My performance—nobody can dispute it.

There are rumours that Gurumurthy has been bought over.

Maybe. I have seen the newspaper reports that AIADMK did something. These are mere speculations. I cannot comment on this.

Can you comment on the Chief Minister J Jayalalithaa’s disproportionate asset case?

Even after spending 15 months in jail. You have kept a cool composure. How do you do that?

I am a student of the thoughts of Periyar, Annadurai and my leader Kalaignar. All these people were jailed so many times. When you are doing something for society—sometimes you are rewarded or pushed into a back position.

Is there anything that disturbs you?

I am a human being. 15 months in jail is disturbing but I took it as a challenge.

'I Don't See A Major Political Challenge From AAP'