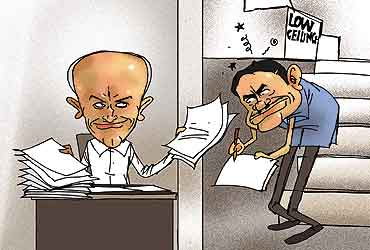 In years gone by, when the Lodhi hotel in Delhi was the lord and master of scores of camphor-strewn suites, in one particular wing there used to be raging debates about the pros and cons of bombing the insane (amongst other more serious issues).

The year was 1995 and the Outlook start-up team had taken base there for a good six months to recruit as many journalist maniacs as they could, cooping them together for many weeks on end—without any work—till the offices shifted to non-hotelish conditions.

While editor Vinod Mehta was busy recruiting journalists adept in the mystic art of bringing out magazines, Deepak Shourie, its erstwhile publisher, plotted out a marketing team of such swift momentum that it could sell annual magazine subscriptions even to giraffes and antelopes, provided they had Citibank credit cards. If memory serves me right, the guerrilla marketing team sent out 15 lakh Citibank mailers and collected about 6,000 subscriptions at a rough cost of Rs 10 per mailer in the first few months of its existence! A conversion ratio of 1:250.

Of course, they blamed the sampler that the editorial had prepared to lure potential giraffes and whatever else was out there interested in would-be newsmagazines for the poor strike rate. Within days, however, a mercurial but largely absconding reporter whose name began with an ‘S’ cut to ribbons a senior administrative person whose handle too began with an ‘S’, leading to the immediate resignation and departure of the pompous and irritating administrative being. The point of contention was either the clearance of taxi vouchers or an attempt to start an attendance register for journalists or some other insignificant point of altercation and it fed office gossip for a few weeks.

Soon, however, there was the creation of what I call the Wadhwa institution in the Outlook office basement where the hostile forces of the administration made a permanent comeback. Acquiring visiting cards meant filling up a forest of forms, and God help you if you wanted a taxi.

Nevertheless, as the Outlook working environment shaped up, it acquired all the positives of a youthful office—a relatively flat hierarchy, reporters left largely to their own devices, no multiple power centres to contend with, minimal office politics and, the best feature of all, do your work and go home.

From the beginning, though, Outlook was up against the India Today (IT) behemoth. The weekly genre it was getting into had already eaten up Sunday, and The Week wasn’t too hot either. So while it had a window of opportunity—as no quality weekly existed—it still had the formidable task of breaching the fortnightly citadel of IT.

One of the things the think-tank did was hire more than 20 personnel (journalists and others) who had previously worked at IT at some stage and who were familiar with the working ethos of a newsmagazine. There was Tarun Tejpal, Ajit Ninan, Sandipan Deb, Prashant Panjiar and Shourie himself who were senior IT hands. Then, of course, there were minor minions like me who had started off on learning the craft by reading original, revised and final pages at the IT desk and had all but become gladiators by virtue of our fights for the office car at four in the morning. To the credit of Vinod Mehta and other senior editors, Tejpal, Padmanand Jha, Panjiar and Deb, the magazine never acquired the neurosis that characterised the working culture of India Today with its endless night shifts—even when in a fortnightly format—and the rather officious and rub-your-nose-in-it distinctions between the editors and the rest of the gang.

. The magazine has had its fair share of affairs, trying-hard-for-it affairs, broken affairs, marriages and squabbles, minor groupings and other such unstoppable human activities.It also had some luminous talent in Sagarika Ghose, Krishna Prasad, Sunil Menon, Saira Menezes, Atul Loke, Jayachandran and Jitender Gupta, and many more who have since left while more have joined.

In the brand establishment phase of Outlook, it was often mistaken for another magazine of the past, Onlooker. Nearly every early reporter could narrate an experience of a source or interviewee confusing the two, much to the reporter’s annoyance. There were also these couple of pages called Glitterati (still on) which no one in the features team wanted anything to do with. So, in the end it was decided by Tejpal that responsibility for their production would fall to members of the features team by rotation. I remember the catastrophic demeanour of said member when it would be his/her turn to baby-sit those pages.

I was lucky to travel quite a lot during my stint at the magazine. Two tours for me have very strong memories. Both happened in 1996. One was a week-long stay in the district of Pratapgarh, UP, with then photo editor Panjiar. It was a photo feature on the hunt for wolf packs who were carrying off babies, ravaging many districts in the area. A tragic story but at the same time so full of the absurd by way of the myths and legends that had built around these infant-eating predators.

Then there was this trip to Tsangboche in Nepal. At around 9,000 ft, it was the place Mt Everest climbers returned to from the base camp to catch a chopper ride back to Kathmandu. I was stuck there for close to a week because of bad weather, sharing space with sherpas and top-notch climbers of the likes of David Breashears, Ed Viseturs and Jamling Tenzing. It had been a tragic May up at Mt Everest with more than a dozen deaths on the mountain. I was trying to reconstruct all that had happened while my colleague T. Narayan was busy taking the pictures. Apart from the pleasure of profiling legends like Sherpa Ang Rita and Apu Sherpa, on the flight back to the Nepalese capital there was also the incident of watching dozens of kids siphon off fuel from the chopper the moment it landed at the Tsangboche helipad. Not to overstate the obvious, but Narayan and I were praying the fuel would last till the chopper reached Kathmandu airport!

The magazine has grown in strength over the years with the last ABC pegging its circulation at 2.56 lakh copies and it’s now edging closer to the 3-lakh figure. It forced IT to turn weekly in 1997, about 20 months after Outlook had launched, something which even Sunday never came close to achieving. A lot of it over 10 years has had to do with Vinod Mehta. No one who claims to know him socially can really extract any "favourable space" in the magazine for themselves. And even though it’s a Herculean task to get decent travel advances sanctioned without him cutting it in half, I’ll stick my head out in claiming he’s by and large a fair person and never plays favourites, that obnoxious pastime of several senior editors.

One hopes the garrulous and lovable Mr Mehta of the cocktail circuit doesn’t anymore transform into the unapproachable and schoolmasterish exterior that generally characterises him in the office. For I have always felt the latter was never his real self but just a device to keep unruly reporters like me at bay.

(Author of Bunker 13, Aniruddha Bahal is editor of Cobrapost.com)