While reading ‘Is Food Better Than Sex?’, the thought struck me—‘Can TV be better than sex?’ 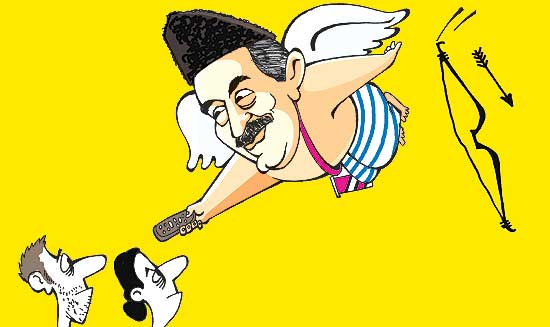 “A birth control pill cannot be a TV. But a TV can be a prophylactic.” No sooner had I assumed charge as health minister than this revelation came to me in a flash. Actually, an AIDS activist friend (let’s call him M) who works for the Gates Foundation forwarded me a copy of an Observer (London) article by Kathryn Flett and Alex James. While reading ‘Is Food Better Than Sex?’, the thought struck me—‘Can TV be better than sex?’ I immediately called up my friend and sounded him out. Could we make our family planning programme more effective by encouraging people to spend more time before the small screen? “What an idea, Azadji, what an idea!” he said, sounding like the sidekick in that mobile phone promo.

Nevertheless, I do respect M’s opinion—remember he is the same gent who did seminal research at an Ivy League university to discover that life is the major cause of death. He also conducted a study on the soporific effect of various foods, including the Kashmiri wazwan (Eat and Sleep, Faber & Faber, 674 pages). Anyway, that aside, with my friend’s approval, I set about planning my new initiative. Now the PM had asked all of us mantris to think out of the box and here I was doing one better than Kapil Sibal and Veerappa Moily who have been making a splash with their first 100 days agenda.

Well, ever since I made my ‘watch TV/don’t procreate’ idea public, I’ve been flooded with calls on my landline (I’m the only minister in Manmohanji’s cabinet without a mobile. And pray why? To let you in on a secret, I have hated that thing ever since I learnt Saifuddin ‘dushman’ Soz uses it spread rumours about my habit of sleeping with my eyes closed.) That aside, I’ve been getting these calls from producers. This chap from Balaji Telefilms wanted to know what kind of programming I was looking for. “It has to be action minus any passion,” I told him. He was quick to get back with an idea: Manmohanji’s speeches gets the ‘Saas bhi kabhi bahu thi’ treatment. Speeded up repeat shots of the PM thumping the lectern, his voice given the double echo effect as he goes “I am not weak, it’s Advani who is weak” etc. It’s superb. Just the thing to get the amorous man/woman snoring.

There have been other ideas too. A full-length recording of Mamataji’s rail budget in slo-mo with a soundtrack of a train going over a bridge under repair. But what I liked the best was a South Indian producer who showed me clips of Rajnikant sleeping. “When they see the great Rajni sleeping, their ‘ayice’ will ‘aalso’ close. There will be ‘know’ time for ‘handkerchief-pankerchief’,” he assured me. Well, my foray into TV has been great fun. Just one glitch. An angry Ambika Soni rung me up yesterday. “Are you the health minister or the i&b minister?” she asked. Rest assured, Ambikaji, it was not my intention to stray into your turf. I was only trying to bring about some sex control.