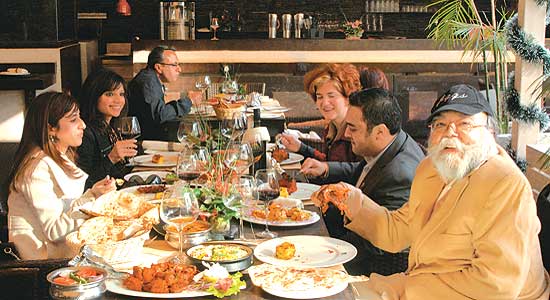 In his memoirs on the Emergency, the late K.R. Malkani, a senior BJP leader, recalls a discussion on the respective meanings of two words in the English dictionary—‘gourmet’ and ‘glutton’—in which he pointed at me and said: “This man is both!” I was in charge of the kitchen for the 19 months we spent in prison, and during those months, I found convicts to make us parathas for breakfast and convinced a kind jail warden to allow us meat, with the result that we got rogan josh for dinner. It was with good reason that we all left prison looking rather plumper.

Needless to say, I am a Punjabi by birth and by culture, and as any good Punjabi will tell you—“Changa khana te changa paana” (You must eat and dress well). Stuffed parathas, served with yoghurt, is my idea of a perfect meal on a winter afternoon. If I were to pick an all-time favourite food, it would undoubtedly have to be the Amritsari kulcha. I discovered it 15 years ago, and can safely take credit for launching it in Delhi, since there is a stall dedicated to it at every big lunch or dinner that I have hosted over the years. Traditionally served with channa, chutney and a light sprinkling of onions, this dish makes for a complete meal. Since the best kulchas are made in Amritsar itself, I have an arrangement with a relative. He visits the city once a month, and brings back about 50 kulchas—I eat one, and the other 49 I share!

The Punjabi ‘changa khana’, a tad oily though, scores over many exotic cuisines.

Election campaigns make for an interesting window into a culture and its food habits. In Bihar, for instance, thanks to bad roads much of the campaign is now done by helicopter. By 5 pm, you’re back in the party office, and find yourself being treated to a mountain of parimal rice, and green choliya with masala and pepper. An austere, cheap and delightful dish, but starkly dissimilar to the rich jalebis and samosas you get for tea in Punjab. You find yourself at an afternoon meeting or a night rally in the state, and discover that an elaborate meal has been organised. There are usually no less than ten dishes and around 300 invitees, each of whom wants a photograph taken with you!

The sheer volume of choice offered in a meal is an apt reflection of Punjabi culture, and it’s interesting to note that Punjab’s paratha-kulcha culture has had a profound impact on the foods of Delhi. You’ll notice that even at Islamic or Christian weddings, the meals being served up are distinctly Punjabi.

On the odd occasion that I eat out in Delhi, I usually end up at the Moti Mahal in Greater Kailash, whose tandoori chicken only finds its match in the exquisite daal meat you get at the Embassy restaurant and the shammi kabab at Wengers. About once or twice a year, an adjourned and disrupted Parliament brings with it the possibility of a surprise lunch. So, with a few other MPs, I visit Kwality restaurant for its incomparable chana bhatura. These occasions, I must add, are only rare. Reasons of health apart, I have found that as you grow in years, your capacity for oily fare diminishes. Unlike many Punjabis, about 98 per cent of me is now contentedly vegetarian.

The shift to vegetarianism became resolute during my tenure as commerce minister. I was travelling at least once a week. The foods of countries like Japan and Israel just didn’t suit my palate, and I ended up having daal and roti in my room, ordered from Indian restaurants in these places. I found these meals significantly more satisfying than the food at state banquets abroad, which qualify as the world’s most boring meals. I pecked on salads, and pretended to eat, but never could.

But even this banquet food cannot be described as the worst food in the world. That title is indisputably reserved for what you get on trains and flights. It might sound outlandish, but I have made it a point to carry my own packed food when I fly. I had to recently travel from Vancouver to London with my family and was mortally afraid of the dinner that British Airways was going to serve on the flight. Once we were ensconced in the first class lounge, I organised some parathas and achar. My wife and children mocked me, but they soon ditched their plates and dug into mine. There is nothing quite like good, honest Indian food.