You may not like it if you don’t have a thing for the inane, but its silliness is not without a thought. 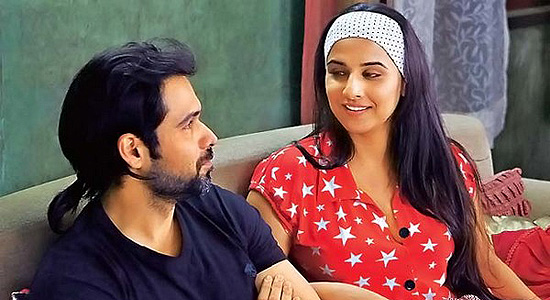 Ghanchakkar starts off on a promising, balmy note, living up to its title. There is something deliciously absurd in what begins unfolding on screen, be it the goons “conferencing” on Virar Fast, the Fem­ina-Cosmopolitan obsession of a housewife, even in captivity. Or the statement-making, even polka­-dotted nightsuit of her husband, handpicked by her. And mind you, we haven’t yet come to her choice of underwear for him.

The film essentially is about a heist gone wrong and a loot misplaced. At the centre of it is Sanjay Atre (Emraan), his wife Neetu (Vidya) and two thugs, Pandit (Rajesh) and Idris (Namit). The robbery itself is uniquely, cheekily filmed and there’s a nice, dark, violent yet loony twist at the end of the tale. In between, the goofiness gets more laboured than spontaneous, things get stretched and are not uniformly engaging. As Pandit himself says in the film: “Dimaag ka dahi ho gaya par baat aage hi nahi badh rahi hai”.

But some touches are insanely nutty. Like a psychiatrist suffering from amnesia. Or the throwaway, casual, needless details, especially food-related, that add to the madness. Idris informing Sanju that the chicken biriyani left for him is boneless. Or right in the middle of an intense chase a discussion from nowhere on how banana is not the only fruit that doesn’t need to be washed. There’s orange too. Or the goons forever chewing raw vegetables, mostly brinjal.

Some sequences stand out. Like a chat on who starred in Ghajini—Salman, SRK or Saif. Retrograde amnesia anyone? And the crowning glory of a scene, starring the fantastic, effortlessly emotive masks of ‘Dharmendra’, ‘Amitabh Bachchan’ and ‘Utpal Dutt’.

The crux of the absurdist thriller, if we may call it that, hinges on the sense of deja vu inherent in our lives. A sense of repetitiveness underlies the structure—be it a stranger in the local train you bump into regularly, or the dining table fights of a couple over the salt in the food. Or a mother’s phone call.

Emraan Hashmi is cool and competent. Rajesh Sharma, as always, a treat to watch. But the weak link is Vidya Balan. She never quite gets into the farcical mode. Over-the-top dressing, an irritating “hain” and a totally off-kilter accent don’t quite a good performance make. Moreover, she remains hemmed in rat­her than letting herself go. Throughout, I was wondering how wonderful this character would have been in the hands of a Richa Chaddha. Or even Sucheta Khanna, the Poli of Yamla Pagla Deewana.

You may not like Ghanchakkar if you don’t have a thing for the inane, but its silliness is not without a thought. Only it doesn’t quite reach the heights it should have. Nonetheless you could watch it for Utpal Dutt. He is a delight. Even as a cardboard cutout.