Getting The Snaps Right

Raja Mohan sees a vigour in foreign relations, advises on true paths, but is guilty of absences and strategic fallacies 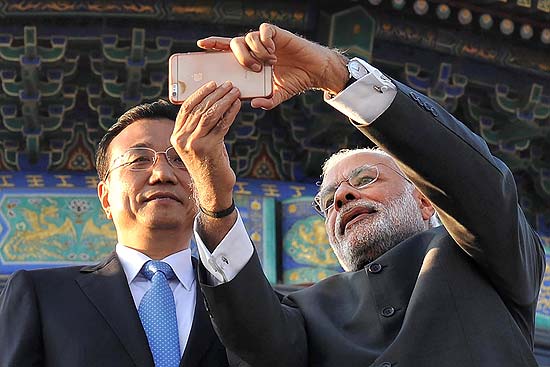 The cover of this book has a dapper Modi gesticulating ass­ertively, as if putting on the world’s canvas the first strokes of India’s new global presence that will be, in Raja Mohan’s words, “purposeful and consequential”, shorn of the timidity, defensiveness, rigidity, empty posturing and “the lack of strategic self-assurance” that have characterised India’s international relations over the last several decades. Deeply frustrated by the repea­ted failure of the former UPA government to steer any of its initiatives to success, the author believes that Modi in just one year has shown he can rejuvenate India’s foreign policy so that India can “realise its full potential as a nation”.

Modi’s achievements in Raja Mohan’s view are already significant. There is substantial engagement with our South Asian neighbours. There has been an outreach to Pakistan, but with the firm caveat that no threat to India’s core interests will be tolerated. There has been no “defensive baggage” in dealing with China; instead, there has been a quiet self-confidence in our bilateral political and economic interactions, even as we enhance our military capabilities to confront encroachments in our strategic domain. Above all, there has been no pusillanimity in dealing with the US and its allies: Modi has had valuable and mutually beneficial interactions with Obama, with “new strategic goals” now being shaped in the two world capitals.

Raja Mohan, of course, has serious concerns about some aspects of the Modi regime which could obstruct the achievement of the expected brave new world: these are the government’s capacity to implement real structural reforms and improve the quality of governance and, above all, keep in check the forces of Hindu extremism that threaten the national values of communitarian acco­mmodation and multiculturalism.

The author also has some important suggestions for the Modi administration: confront Pakistan, but recognise its ‘centrality’ in Afghanistan; pursue a robust economic engagement with China and make it a participant in our economic development, but accept that it will project its power and influence across Asia; in West Asia, maintain strong ties with Israel, but have “an open and vigorous engagement” with the Arab world.

This is essentially a collection of Raja Mohan’s newspaper columns over the first year of the Modi era, interspersed with a useful linking commentary, and a good introduction and conclusion. Each article is clear, cogent and pithy, marked by the in-depth historical knowledge of a scholar and the clarity of thought of an influential journalist. Still, Raja Mohan has left out several important subjects: there is no separate article on Russia, the Shanghai Cooperation Organisation or even BRICS. West Asia is covered in two short pieces, which do no justice to the complexity and importance of our ties with this region in turmoil, nor is there any piece on Iran, Central Asia or Turkey, or on the crucial issue of energy security.

Again, in dealings with the US, Raja Mohan contrasts Indian ‘inflexibility’ with Chinese pragmatism. He should have recalled that through the Cold War and beyond, the US actively sought engagement with China, while pursuing policies of active hostility towards India. He now advocates a stronger Indian engagement with the US, perhaps even a strategic partnership to “secur(e) the balance of power in Asia”, thus, suggesting a strong Westward content in India’s foreign policy. He should have set out in greater detail the constraints in achieving this from the Indian perspective, particularly the US’s continued accommodation of Pakistan’s deep affiliations with extremist Islam at home and across the region. Raja Mohan’s recommendation that India accept Pakistan’s ‘centrality’ in Afghanistan seems more in US than in Indian interest.

Taken as a whole, the book has a sense of disjointedness and even confusion. Raja Mohan supports a multiplicity of robust engagements, but rej­ects ‘strategic autonomy’ for India. He admits that, in spite of Modi’s numerous external forays, there is still “no coherent set of principles” shaping his diplomacy. Unfortunately, he does not himself set out an overarching strategic vision for India in a world convulsed by tectonic changes, with traditional western powers in retreat and new nations from Asia claiming a space and role in tune with their political, economic, technological, financial and demographic prowess. He rejects the idea of Asian nations acting in concert to shape the new world order but does not offer anything else in its place.