Get Back On The Freeway 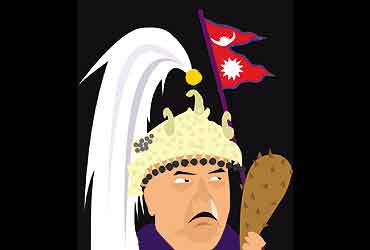 outlookindia.com
-0001-11-30T00:00:00+05:53
On February 1, King Gyanendra reached into a deep freeze that had not been opened since King Mahendra ousted an elected government in 1959 with his own royal military coup d'etat. While he has not imposed a ban on political parties as his father did, Gyanendra's arguments for takeover were essentially similar: the parties had messed up badly and it was up to a monarch dedicated to the people to save the nation.

In his half-hour televised address, Gyanendra repeated his allegiance to 'multi-party democracy' 11 times. Even as he talked, however, the leadership of the mainstream political parties were being rounded up and herded into detention, where they remain today. King Gyanendra lambasted the dozen years of what he asserted was democratic misrule, but was silent on the accelerated downturn in human security and the remarkable economic decline that has occurred since October 2002. This was a period when the royal palace ruled through appointed prime ministers.

The king is now the self-appointed chairman of the Council of Ministers, a cabinet made up of what The Economist described aptly as "cronies, chancers and nobodies". To assist him, Gyanendra dusted off two venerable septuagenarians who were his father's choice for similar positions four decades ago. The senior among the two vice-chairmen is a Jehovah's Witness who has taken the name of one of the apostles. Like Peter, he had been abroad as an evangelical missionary in Sri Lanka and India for a quarter century until he received the call last month.

Just as the middle class of India was mollified because the trains ran on schedule for a time after June 1975, Kathmandu's urban classes are happy that the roads are free of rallies and protests. More than half of the security forces has been deployed to protect the Kathmandu valley, but the security in the hill and Terai districts where the vast majority live is at an all-time low. The Nepali people have been deprived of representation ever since Parliament was disbanded in 2002, now they are completely without recourse.

It was the Maoists who dragged the Royal Nepal Army out of the barracks, but the king's action has entrenched the military in Nepali affairs to the extent that political evolution is in jeopardy. A ceremonial army that was trying hard to professionalise even as it fought a brutal insurgency has been compromised by its being used as the tool for a coup d'etat. A new dynamic has been introduced into the matrix of national politics, which it could have done without.

It has become common wisdom to state that Gyanendra's actions, first to sideline the political parties and now to wield direct power as an absolute monarch, have their origins in the deep antipathy he harbours for the said parties and their many incapacities. But, after February 1, this has begun to look opportunistic: an excuse for direct rule.

Through his takeover, the king has put at great risk the 250-year-old institution of monarchy that makes Nepal the oldest nation-state in South Asia. On the day that he acted, wellwishers of the institution had hoped that the palace had an intricate plan of action for peace. Perhaps a secret deal with the Maobaadi, or the military finally going on the offensive. Five weeks later, these people continue to wait.

It's difficult to know the mind of a monarch. The king might perceive himself a lone hero out to champion the grieving populace, someone willing to swallow the bitter pill of mass criticism in order to bring order to the land. But the royal palace has been taken aback by the widespread international condemnation, and by the calls from New Delhi, London and Washington for an immediate return to multi-party democracy and constitutional monarchy.

Thus far, the royal government has responded to the international reaction with bluster and bravado, and there is no move towards restitution of civil liberties. For the political forces, it's still not appropriate to rely on international assistance for restoration of democracy, as anything brokered from the outside will not deliver the optimum. The push and energy must now come from within, and it is up to the people of Nepal to agitate for a return to full democracy.

Beyond the release of political detainees and restoration of all civil rights, return to democracy means the emplacement of an interim government selected by the political parties, whatever form it may take. This is the only mechanism that can lead the country in the direction of a satisfactory resolution of the Maoist problem as well as towards constitutional remedies to make the state more responsive and inclusive than what has prevailed since 1990. That was when the panchayat autocracy of 30 years was put to sleep, and whose ghost has been revived now in the minds of many.

For three years since the half-takeover of 2002, the call has been for the king to make common cause with the constitutional forces. Even after the royal takeover, the path to resolution remains unchanged. It may sound ironic at this late date and given the state of siege, but Nepal could still evolve as a fine laboratory for democratic innovations in South Asia. And King Gyanendra can still be part of this success, but for that he will have to roll back the action of February 1 in its totality. He must get over his distaste for the pluralistic political process, and make an approach to the political parties. If not, he may be presented with a fait accompli.

(The author is a Kathmandu-based editor, publisher. He was detained briefly by the government last week.)