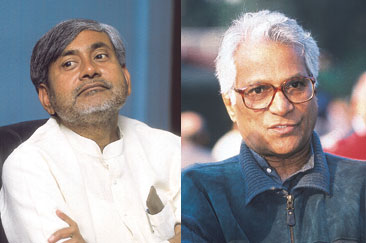 outlookindia.com
-0001-11-30T00:00:00+0553
It had all the makings of a major agitation until the usual spectre of political infighting blunted the edge. The brutal "encounter" killing of three students at the hands of the Patna police last fortnight had the Rabri Devi government fully on the ropes, raising visions among the Opposition of a 1974-like student unrest. But that was not to be.

An intra-party tussle between state Samata Party strongman Nitish Kumar and party president George Fernandes took the punch out of the Opposition protest. At the end of an acrimonious, no-holds-barred week, it was Fernandes who had to yield ground. His pointsman in Bihar and state party unit president Raghunath Jha had to resign after unrelenting pressure from the Nitish camp. At a brief meeting in Delhi on Friday, the Samata parliamentary party decided to appoint Nitish's man Vashishth Narain Singh as the state unit's interim convenor.

Outwardly, it was made out as if a settlement had been reached. "It is a unanimous decision and has the backing of the entire party. We are absolutely united on the issue," said party MP Prabhunath Singh, a close Fernandes supporter. While Jha was not available for comment, sources close to him said he was exploring several options and was said to be in touch with JD(U) leader and cabinet minister Sharad Yadav.

But in fact, Fernandes was left with no option but to ask his man to quit. He could not antagonise Nitish who, with his influential backward Kurmi votebank and grassroots support, is the backbone of the party in Bihar. The defence minister had depended largely on this support base to win his Nalanda parliamentary seat.

The George-Nitish camaraderie hit an all-time low last week. In a classic case of war by proxy, the two leaders maintained a studied silence while their camp followers battled it out, much to the delight of RJD strongman Laloo Prasad Yadav.

In fact, such was the divide within the Samata that a section owing allegiance to Fernandes, which should have been targeting Laloo, began openly training its guns on Nitish. The leader of this faction was Jha himself, considered 'close' to Laloo and the RJD. Even by the fractious Samata standards, the crisis was seen as critical and for the first time, the George-Nitish tussle had virtually spilled out in the open. Early in the week, party insiders feared a rapprochement impossible. Now they wonder how far Jha's resignation will appease the Nitish camp.

Trouble between Nitish and Fernandes came to the fore on January 2 when the latter called a meeting of nda leaders from Bihar to chalk out future agitation plans in the wake of the students' killings. Nitish was not invited. This came as a shock to many partymen. Says Samata leader Satish Kumar, "Nitish is our party leader and state convenor. It was a deliberate attempt to marginalise him, so we decided to walk out from the meeting."

He, along with another party legislator, Shyam Sunder Singh Dheeraj, boycotted the meeting and unilaterally declared a 'split' within the party. At a parallel meeting, they announced the removal of party spokesman P.K. Sinha from his post. Both Fernandes and Jha immediately denounced the move and reinstated Sinha. The war was now out in the open.

Said Sinha sarcastically, "Since I was removed by fake leaders and appointed by the national president, he alone can remove me." Nitish loyalist Satish Kumar would have none of it. "Being a national general secretary, I am competent and justified in taking such a measure as Sinha is hand in glove with Laloo."

The result of this infighting was that just when human rights groups and political activists were preparing for an assault on the Laloo bastion, all attention was deflected on to a possible split in the Samata.Patna was rife with speculation on Fernandes considering leaving Bihar and returning to his home state, Karnataka.

Meanwhile, the battle raged on. Nitish loyalists began insisting on Jha's removal. According to party insiders, of the 11 Samata MPs, Nitish has the support of about six MPs whereas five owe their allegiance to Fernandes. The 30 mlas likewise are split down the middle.

Infighting is not new in the Samata. Ever since its inception in 1994, the party has seen much churning. As many as 16 of its top leaders have either left or have been expelled from the party because of internal bickerings, ego problems and pure political opportunism. And there may be no end to it. "It is only because of the autocratic style of functioning of Nitish Kumar who wants to make Samata an organisation run by an individual that the party has once again come on the verge of splitting," says Brahmanand Mandal, MP.

Mandal, one of Nitish's long-standing critics, charges: "Nitish acts like a Laloo man and wants his partymen to function as per his diktat." That naturally is refuted strongly by trusted Nitish lieutenant Rajiv Ranjan Singh Lallan, a Rajya Sabha MP: "Nitish Kumar has been fighting Laloo for long and he does not require a certificate from anyone to prove that he has been fighting against the Laloo-Rabri raj in Bihar. And it's also true that the Samata Party in Bihar identifies with Nitish Kumar and not with George Fernandes."

Apart from blunting a potential political agitation, the latest bickerings only go to show how much Laloo is in control of the state, particularly since the formation of Jharkhand. In Patna, it is common knowledge that a section of the Samata is 'friendly' with Laloo. Laloo has in the past split parties like the cpi(m), cpi(ml), bsp and even the Congress. He now seems to have made inroads into the Samata as well.

What is at the core of the current differences between Nitish and George? Some political observers say that Nitish is reportedly piqued by the latter's cosying up to Mamata Banerjee. The Trinamool Congress leader has made clear her intentions of rejoining the Union cabinet conditional on her getting back the railway portfolio now with Nitish. Recent meetings between her and Fernandes had only added to Nitish's displeasure.

As for the prospective scenario, events will now move on January 19 when the Nitish faction has called a state committee meeting in Patna to chalk out his future course of action. Until then, some leaders will be trying to effect a last-minute patch-up. For the record, party spokesmen maintain that "it is an internal matter of the party which will be sorted out amicably and there will be no split".

Should a split happen at all, it would be difficult for Nitish to survive in the Union cabinet without the support of Fernandes and his MPs. And without Nitish, it would be equally inconceivable for the 'rootless' Fernandes to win the next parliamentary election from Bihar. The removal of Jha showed that both leaders were aware of this ground reality.

Meanwhile, Laloo is not only breathing easy but having the last laugh from the sidelines as one more rival party finds itself in disarray. The question now is, will Jha's resignation ensure the end of the crisis? Or will Nitish, clearly bolstered by this latest development in the factional fight, insist on other changes in the party as well?