'Gentlemen, There'll Be No More Retreat'

Sam Bahadur was India's First Soldier, ever the general, ever the showman 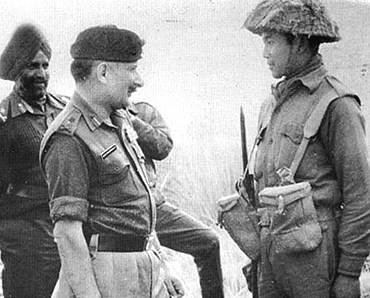 outlookindia.com
-0001-11-30T00:00:00+0553
Some two years ago, the editor of a magazine called and asked me to write an 800-word obituary on Field Marshal Sam Manekshaw. Minutes later, he cancelled the order, saying it was a false alarm. In life as in death, Manekshaw defied the odds. When he finally succumbed to pneumonia at 94, I was in Ranikhet with my old unit, 2nd Battalion, 5 Gorkha Rifles, the regiment he was proforma posted to after Partition, though he actually joined 8 Gorkha Rifles as the Colonel Commandant.

Although Sam never actually commanded Gorkha troops, he became the lifeblood of Gorkhali folklore. Sam could never actually decide which of the two, 5 or 8 Gorkhas, he liked more, so he carried two lanyards representing both regiments. The two johnny Gorkhas who flanked the condolence book at the Amar Jawan Jyoti were from 8 Gorkhas.

2/5 Gorkha Rifles is the only Indian battalion to have won three Victoria Crosses and is called the VC Paltan. Sam had his eye on the two bronze busts of the two living VC winners, Gaje Ghale and Agam Singh Rai. He commandeered both busts for his office when he became Chief of Army Staff in 1969. He also had his eye on me. But my own appointment as ADC to Sam did not materialise—as he later told me: "Having heard about your antics at Staff College, I realised I would become your ADC."

In Wellington, where the Field Marshal's last rites were performed, the official ceremony was grossly inadequate. Sam was after all India's First Soldier, the epitome of generalship, who gave India's its first unambiguous military victory in 1,000 years. The President, the supreme commander of the armed forces, was missing. So were the prime minister and defence minister. Worse, the chairman chiefs of staff committee was also absent. Nor was the air force chief present. Queen Elizabeth of England sends roses to all her field marshals on their birthdays and also attends their funerals. Here, flags were not even lowered and the affront of an explanation for this ignominy was that the field marshal is not in the warrant of precedence. This is a lie. The babus of this country had ranked Sam on a par with the cabinet secretary.

On his 90th birthday celebration (April 2, 2003), at the Battle Honours mess in Delhi, hosted by the chief of army staff, Gen N.C. Vij, Sam told some of us Gorkhas that "like everything else in my life, I was born the wrong way around. My father, a gynaecologist, took 40 minutes to straighten me out". After commissioning from the Indian Military Academy, Dehradun, Sam Hormusji Framji Jamshedji Manekshaw was attached to the 2 Royal Scots. Since his name was a mouthful, the officers of the Scottish Regiment abridged it to 'Mr Mackintosh'.

He was to earn his battle spurs with 4/12 Frontier Force Regiment, called "6 Churinga" (54 Sikh), in the action across the Sittang Bridge in 1942, and won an instant Military Cross. "Anyone who says he doesn't know fear is either lying or a Gorkha," Sam once said. And then added, "I know nothing about fighting—the only skirmishing I learnt was from my wife...and she died in 2001."

There's a lovely story about the origin of the appellation 'Sam Bahadur'. One Harka Bahadur Gurung was accosted in the Quarter Guard by Sam, who barked: "Mero naam ke ho? (What's my name?)". Without batting an eyelid, Gurung belted out: "Sam Bahadur, saab." That evening, Harka Bahadur drank a double tot of rum for his quick and creative riposte.

Sam's rise to giddy heights without having commanded a battalion was unique. It would be unthinkable today. When he visited Nepal after liberating East Pakistan, King Mahendra conferred on him the title and sword of Honorary General of the Royal Nepal Army, beginning a tradition whereby the chiefs of the two countries are made generals in each others' armies. Sam Bahadur is a household name in the villages of Nepal.

Sam batted for his soldiers and the army. In 1953, he had become Director, Military Training. He fought off the government's bizarre attempt to downsize the army to 1,00,000 in what became known as Plan 100. His next skirmish was with defence minister V.K. Krishna Menon who, in league with Lt Gen B.M. (Bijji) Kaul, was gunning for him for his anglicised style and supposedly pro-British views. An inquiry to fix him with charges of being anti-national was attempted, but "the Chinese came to my rescue", he would say. With most other generals falling by the wayside during the 1962 debacle, Sam got promoted to stem the rot. On reaching 4 Corps, ironically to replace Bijji Kaul, he said: "Gentlemen, I have arrived. There will be no more withdrawals." Luckily, the Chinese declared a unilateral withdrawal.

Sam was no great sportsman. He liked gardening, tending to roses, trimming hedges, manicuring the lawn. He enjoyed playing bridge, with wife Silloo as partner. Both drank moderately, Silloo rum and Coke when Coca-Cola was available, later wine; Sam, Famous Grouse, the Scotch made famous by British and Nepalese royalty. The last time he offered me a drink was at his daughter Maja's house in 2004. "The beer is not cold. I'll put ice," he said. "Why did you name your other daughter Sherry?" I ventured. "Ah, but I didn't tell her to marry a fellow called Batliwala or name their daughter Brandy. That's not all...Maja married a Daruwalla," he quipped as he put more ice in my beer.

The high point in Sam's career was the unblemished victory in East Pakistan. There was no looking back after luck and Maj Gen J.F.R. (Jakes) Jacob's brilliant psy-war converted what would have been a UN-supervised ceasefire into complete capitulation and surrender.

Many qualities of head and heart combined in the persona of Sam Manekshaw. Charisma and leadership stood out. So did the art of communication and establishing rapport as easily with Prime Minister Indira Gandhi as with the soldiers of 6 Churinga, and the Gorkha Rifles. At the President's banquet for the Shah of Iran, Sam, resplendent in his green patrols and pouch belt, complimented Indira Gandhi within earshot of her cabinet colleagues: "You look beautiful tonight." "Thank you, Sam," she smiled.

He was a showman par excellence. At the height of the 1971 war, he would ensure he was seen at the bar of the newly constructed Oberoi Hotel, sipping Famous Grouse, signalling that the conduct of the war was in safe hands. Sam was a lucky general but had his share of controversies and indiscretions. Perhaps it is less known that he was prone to exaggeration and could sometimes be economical with the truth.

That his operational directive to the Eastern Command did not contain Dacca as an objective in 1971 has been debated to death but never refuted by him in his lifetime. The conversation in 1967 between Sam and US Consul General William K. Hitchcock on a flight from Delhi to Calcutta was candid beyond indiscretion, revealing his ideological bias and proclivities as Army Commander.

But for a last-minute change of heart and objections from the iaf, Manekshaw would have been made Chief of Defence Staff in 1972, a strategic void that exists to this day. He went home to Coonoor in 1973, but the army's loss was the corporate world's gain. He was on the board of 14 companies, chairman of six. Our association, which blossomed when I was teaching in Staff College soon after he retired, matured after I left the army 15 years later. Meetings in Coonoor and Delhi became frequent. Room 405 at the Oberoi was reserved for him.

In 1993, at the height of the Kashmir insurgency, he said to me. "So you have retired. I have a job for you in Srinagar: to revive a timber factory. There's no labour. No power. No transport. And no wood. But I know you can do it...."

What I was really after was to get the Field Marshal to appear on my TV programme, DefenceWatch. He kept me dangling for years without saying yes or no. Instead, in Room 405 he would regale me with stories he had told me earlier, and new ones. He would parry questions on the 1971 war, his role in the alleged payments to ulfa by Tata Tea, implicating a fellow Gorkha, then Assam governor Gen S.K. Sinha.

He told me how a Union cabinet minister in Mrs Indira Gandhi's government used to visit him with his girlfriend. "One day he brought a suitcase packed with banknotes instead. He put it under my bed. 'Why here?' I asked. 'My wife will steal it,' he replied. 'How do you know my wife won't?'"

I once confessed to him, "Sir, I used to impersonate you at Staff College. Everyone said I looked like you." Quick came his reply: "No wonder your wife married you!"

So we're left with Manekshaw-isms, Sam-isms and hearsay. But no serious biography of this great man and general. His last best quip. He was on the board of directors of Escorts when Mr Swraj Paul tried to take it over. The government responded by changing the entire board, a Mr Naik replacing him. "This is the first time in history that a Naik (Corporal) has replaced a Field Marshal".

Not true. It'd be impossible to replace Sam Bahadur.

The Sponge Is Animated