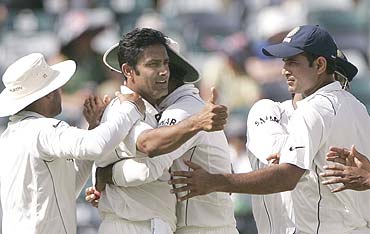 Kumble can surely claim a fair share of the glory. The triumph was a tribute to his indomitable spirit; the historic win made many (some still grudgingly) attribute leadership qualities to a man often respected only for his dour resolve. It's possible the Indians could lose the Adelaide Test. But even as this report is being written, on the first day of the Test, it can be declared: Kumble is just the man the Indian team needed at the helm. The unassuming Bangalorean has reinvented himself—and with it remapped the heights this India XI can scale.

But the unwavering attention can also be a bit of a bother, for it leaves little time for other pursuits. For instance, Kumble rues the fact that on this tour he's had little time to wield the camera. "You know, the sunset over the Swan river in Perth can be majestic," he smiles. "I wish I had the time to capture it on film." But then, as they say, the best images are those preserved in memory. And there will be plenty for Kumble to pick from the current Oz tour once he hangs up his boots.