Jayalalitha knows her state needs power, but spars with the UPA over the N-plant 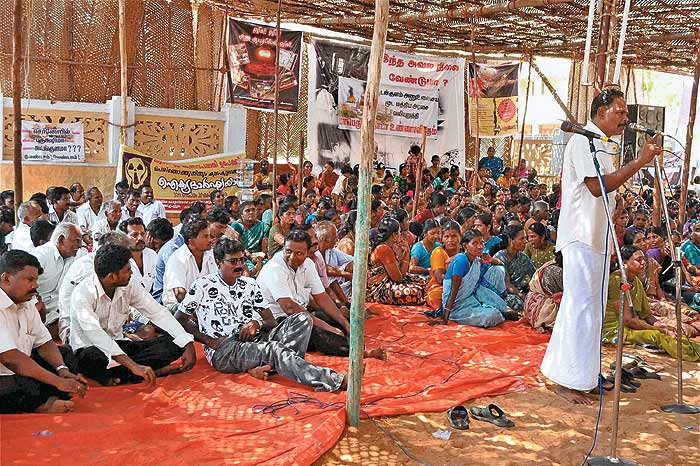 It seems Tamil Nadu chief minister J. Jayalalitha has now chosen to make the Koodankulam Nuclear Power Plant (KKNPP) a handle to beat the Centre with. As the Centre squirms over the agitation in Idinthakarai, Tirunelveli district, against setting up the nuclear plant, Jayalalitha has done nothing to ease things. The antipathy has only grown over the Centre not clearing the Rs 2.5 lakh-crore Tamil Nadu has sought for clearing its financial mess. At the National Development Council meeting on October 23, Tamil Nadu finance minister O. Paneerselvam read out the chief minister’s speech in which she said the Centre was treating states as if they were “glorified municipal corporations”. She has often said the UPA “does not seem to understand that people living in non-Congress states are as much citizens of India” as those in Congress-ruled states.

One of Jayalalitha’s first promises on becoming chief minister was that she would solve the power crisis within three months, which she later extended to “by 2012”. This led many to think she would help bring the KKNPP into early operation, for the state was entitled to a substantial share of the power generated. (In fact, the prime minister has written to Jayalalitha that Tamil Nadu would be allocated 925 of the 2,000 MW to be generated by Units 1 and 2 of the plant.) But she seems in no hurry on the already much-delayed project. Or perhaps, she has changed her mind.

The Nuclear Power Corporation of India Ltd (NPCIL) is building the reactors with Russian technology, the deal for which was signed way back in 1988, when Russia was still the USSR. After many a hiccup, a new deal was signed with Russia, land was acquired from the state government and construction began. Rs 13,000 crore has been spent so far. “One reactor will be commissioned soon; 95 per cent of the work on the second has been completed,” says Dr Kashinath Balaji, project director, KKNPP. According to the new MoU signed with Russia in 2008, four more reactors are to be set up.

Power supply, industrial and domestic, has been precarious in Tamil Nadu: last month, a CAG report said the state had added only 290 MW in generation capacity against the required capacity addition of 3,977 MW. The state’s inability to meet a big chunk of the power demand—the deficit sharpening in peak period—was a big minus point against the previous DMK regime. The demand is for 10,500-11,500 MW, and the state has an installed capacity of 10,237 MW, of which 8,000 MW is available, resulting in a shortfall of some 3,500 MW.

Well aware of this, Jayalalitha had at first appealed for an end to the agitation against the project. This was when S.P. Udhayakumar, convenor of the People’s Movement Against Atomic Power, began leading a fast by some 127 agitators in Idinthakarai on September 11. Over the next few days, as hundreds of fisherfolk and other locals joined the protest, she changed track and demanded the project be stopped till their fears were allayed. Given that local body elections were scheduled for October, she wrote on this issue to the prime minister. And on September 23, the Tamil Nadu cabinet adopted a resolution demanding suspension of work on the project.

In any case, as Udhayakumar puts it, the agitation is actually focused against the Centre. It regathered steam on October 9 after a lull, but made allowance for the local body elections on October 17; it was suspended that day and resumed on the next. In the current phase of the agitation, protesters are picketing all gates leading to the plant. “Only 100 employees are working, in three shifts,” admits Dr Balaji. Thousands of contract workers hired for the Koodankulam plant by NPCIL from Uttar Pradesh, Bihar and Jharkhand have gone away. The local economy has been hit badly: fishermen are being allowed to leave the picket lines in turns to go to sea and earn a living.

What has added to the locals’ fears—other than Fukushima, of course, and their own experience of the 2004 tsunami—was a deafening noise heard within four kilometres of the plant. The explanation offered by Prof B.C. Pathak, the chief construction engineer of the project, that the noise was caused by steam being used continuously to flush out pipelines, has no takers at present. “The world has a history of nuclear disasters,” says Nityanand Jayaraman, an activist. “Nuclear technology is inherently unmanageable,” he adds. Pathak’s attempts to explain to a gathering of protesters that Fukushima was 300 km from a tsunamigenic area, whereas Koodankulam was 1,500 km away from the source of the last tsunami, did not seem successful. Incidentally, the Madras Atomic Power Station (MAPS) in Kalpakkam, 70 km from Chennai, had set off worries after the 2004 tsunami: it was shut down for a bit.

The bottomline, however, is that the PM, who had staked his government on the Indo-US nuclear deal in 2008, is unlikely to backtrack on the plant. “They (the government) will divide and conquer,” says Gnani Sankaran, a writer and activist. But the shadow of Fukushima looms large, and the prime minister will have to negotiate the crisis carefully. He does have a secret weapon, though: former president Abdul Kalam, who speaks Tamil and has a background in science and overseeing nuclear projects, could be persuaded to allay the fears of the locals. Being a man from those parts may also lend Kalam’s voice some acceptance. Should the prime minister’s committee of experts fail to convince locals, Kalam might well be recruited. With Jayalalitha playing difficult, that might prove necessary.