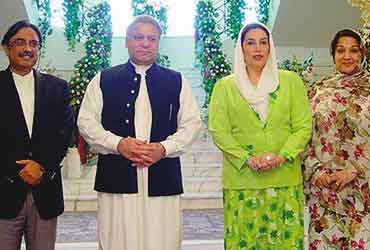 As newspapers flashed reports of last fortnight's meeting between the Bhuttos and the Sharifs in Jeddah and their avowal to introduce democracy in Pakistan, Musharraf remarked, "We will see how long this political sister-brother relationship lasts." This remark is an eloquent testimony to the fact that the general isn't interested in ushering in real democracy. Therefore, the question naturally arises: why does Musharraf want to cut deals with those whom he detests?

To begin with, the Muttahida Majlis-e-Amal (MMA), an umbrella organisation of religious parties, isn't willing to play footsie with the army; it's in fact desperate to join the Alliance for the Restoration of Democracy (ARD) of which Benazir's Pakistan People's Party (PPP) and the Pakistan Muslim League (Nawaz) are the two largest entities. A united Opposition is bad news for Musharraf, more so because the ruling Pakistan Muslim League (Q) hasn't delivered the political support he had hoped for. Add to this the problem of insurgency in Balochistan and Waziristan, the mounting pressure from the United States and the European Union to further "democratise" the system, the pressing need to take decisions on the peace process with India, and the outcry against the proposed construction of Kalabagh dam 100 miles southwest of Islamabad. These are all ominous developments for Musharraf who believes it is in Pakistan's 'national interest' to have him rule in perpetuity.