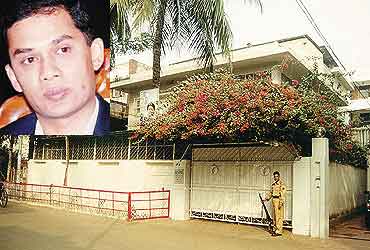 There’s little extraordinary about Hawa Bhaban, where Tarek Rahman resides. It’s a nondescript two-storey building located in Dhaka’s posh residential quarters of Banani. And yet Hawa Bhaban invariably surfaces in discussions in drawing rooms, in restaurants, at public places of any importance.

Even the media has started to openly talk of the enormous clout Hawa Bhaban has over the government. Last week, for instance, the daily Janakantha reported on Hawa Bhaban’s interference in deciding the name of the new cabinet secretary, the country’s highest-ranking bureaucrat.

"You can’t do any business without giving a share to Hawa Bhaban," thundered ex-PM Sheikh Hasina at a recent public meeting. Sensing the country’s discomfort at the shadow Tarek has cast over the government, an emboldened Hasina even accused Hawa Bhaban of masterminding most of the high-profile bomb attacks during her tenure.

The ruling Bangladesh Nationalist Party (BNP) was quick to dub the charges as "fabricated and irresponsible". It issued a statement declaring that the former PM had gone berserk because of the humiliating defeat she had suffered in last year’s general election. The BNP’s clarification has ironically once again turned the spotlight on Hawa Bhaban, which a ruling party MP owns. The Bhaban came into prominence more than a year ago when it was made the campaign HQ and Tarek emerged as the BNP’s main strategist. Employing modern techniques in the election campaign, and running the show through a hand-picked team, Tarek could be said to have been instrumental in Khaleda Zia’s impressive show at the hustings. His efforts won him lavish praise all round, inspiring BNP MP, Mashiur Rahman to even describe Tarek as "our future statesman" in a parliamentary debate and propose a special vote of thanks for him.

Only 35 years old now, Tarek’s influence was only marginal when his mother first became prime minister in 1991. This was perhaps because he focused more on business, becoming a multi-millionaire overnight through entrepreneurship in sectors as diverse as shipping and textiles. In his mother’s second coming, Tarek has palpably decided to invest his time and energy in politics, entrusting his flourishing business empire to the care of his schoolmate, Gyasuddin Al Mamun.

Stories about Tarek’s influence came to the fore when Khaleda Zia named a 60-member cabinet last year. Tarek was believed to have played a decisive role in the formation of the largest cabinet in the country’s history.

Since then, stories of his clout have only multiplied, sparking speculations of the gradual undermining of Khaleda’s authority. "This is not true. I don’t think she’s gradually ceding control to her son," says Abdul Kader Molla, a leader of the Jamaat-e-Islami, a partner in the ruling four-party alliance. Molla feels most stories about Tarek are grossly exaggerated, and that a "vested coterie in the government is deliberately passing the buck to him" for any decision which could boomerang on the ruling coalition, especially the BNP.

But the blatant manner in which the official media fetes Tarek tells its own tale. At a recent foundation-laying ceremony for a hospital in Bogra, his home district, the government TV channel showed the PM, the health minister and then Tarek, ignoring senior party leaders and officials present. You could say just about everyone knows who the boss is.

Tarek’s friends, obviously, feel he deserves all the fuss and attention. "He has all the qualities to be a national leader. He’s no doubt madam’s (Khaleda) anointed successor," says Saifur Rahman Nantu, a businessman who’s known Tarek for 18 years. But political analyst Prof Serajul Islam Chowdhury counters, "We don’t want dynastic rule any more," he says. "The liberation war was not fought to create dynasties but a truly democratic society."

Well, didn’t they express such noble sentiments in India and Pakistan too?