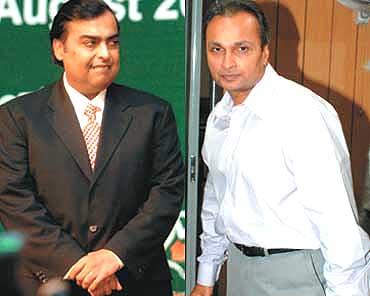 Guarantees Anil gas from RIL’s KG basin block at 44% below listed govt price. Asks Ambanis to sort it out, reveals Anil has first right to 40% of RIL’s gas from all blocks.

Legal battle may continue; govt is studying the impact on its revenues and the public interest.

Finally, a verdict on the bruising battle between the Ambani brothers over the supply of natural gas from the Krishna-Godavari basin. But don't for a minute be lulled by the uneasy calm after the Bombay High Court ruling, which experts say is a "surprising" and "huge" victory for Anil Ambani. There's furious scurrying around. Will the Ambani brothers—guided once again by their mother Kokilaben—now choose to settle their differences? Alternatively, as many expect, the legal battle will continue if elder brother Mukesh Ambani seeks a Supreme Court review.

While the brothers figure out what to do next, it's the government that really needs to be concerned about the implications. The verdict upholds the de-merger pact (or MOU) signed between the Ambani brothers when they parted ways in 2006. This secret document will now be the overarching basis to look at the supply of gas from Reliance's D-6 block. Given that the government has often been a spectator in this battle, this raises many questions. To start with, how does it impact government revenues, which come in the form of royalty and share of profit after paying out the operators' investments?

Also, does the government really hold the right to decide how scarce national mineral wealth like oil/gas can be utilised? One would have thought this question had been answered when the government last year formulated the national gas utilisation policy (which has been notified). But that seems to be a fallacy, as the HC ruling has clearly overturned it by upholding Anil's claim not only to a sizeable chunk of gas but also at a price almost half the government-finalised $4.2 per million British thermal unit (mBtu).

This assumes greater relevance when one reads parts of the secret MOU that was shared with the court. It's been a revelation to all—even, it appears, to the government—as the MOU establishes Anil's first right of refusal over 40 per cent of the gas/oil from Reliance Industries' share in any exploration block. And not, it must be noted, just limited to the current dispute over the D-6 block in the Krishna-Godavari basin. Does this mean the operator of an exploration block holds the right to decide the utilisation of gas? Does the gas (which, after all, is a national asset) become a personal asset, which can be shared, bequeathed or sold at any price without government consent?

"Most oil and gas companies, including ONGC, would like to utilise their produce for captive purpose. However, being a scarce resource, it should be utilised as per national policy," avers B.K. Chaturvedi, a member of the Planning Commission and former cabinet and petroleum secretary. This is evident at a time when India's dependence on imports is growing and the domestic fertiliser and gas-based power plants are running well below capacity.

The problem is that the government hasn't been proactive—and that's evident when one looks at the crucial issue of pricing in the gas claimed by Anil. When Mukesh's RIL entered into a draft agreement to supply 12 million metric standard cubic meters per day (mmscmd) of gas to state-run power major NTPC at $2.34 per mBtu, the government was well in the picture. Yet, it did not uphold NTPC's claim when RIL refused to commit to the price. The matter has since been in court. Now, according to the high court, the same price is to be applied to 28 mmscmd of gas supply to Anil's Dadri plant.

If NTPC loses the case, Anil's company has claims to an additional 12 mmscmd. It seems odd that the government was unable to convince the court either on NTPC's claim or on the desirability of fixing the price of gas sold to Anil at $4.2 mBtu (again a figure of considerable dispute, given the limited number of companies allowed to bid in the price discovery). Unwilling to comment on whether the verdict in the Ambani case could work in its favour, NTPC managing director R.S. Sharma would only say "this is a very dynamic situation, and we are open to getting fuel from all sources". Incidentally, the government is nudging NTPC to buy gas from Reliance at $4.2 per mBtu—on the assurance it will not compromise the court case.

There are more ambiguities. Till last year, the government diktat on allocation of gas was restricted largely to output from state-owned companies. This was changed to include production from private and joint ventures, thanks to rising prices. Even so, as energy expert K. Ravichandran of ICRA Ltd points out, the policy finalised last year "has left a lot of grey areas. The government itself has now made it obvious that the HC judgement would take precedence over its gas policy".

What does the government have to say about this sorry state of affairs? Petroleum secretary R.S Pandey clarifies, "We are studying the legal implications on the government revenue and consumers. Let us see to what extent our policies and consumers get affected." The disclosures from the Ambanis' MOU has also naturally raised the question whether the brothers may end up using RIL's entire share of gas from all blocks in future. Another senior petroleum ministry official did admit that "government and public interest has definitely been hurt and we are looking into it".

One would hope so: there is lack of clarity on whether RIL would compensate the government for any loss of revenue or royalty if a lower price is agreed for supplies to Anil. It's also not clear whether the ruling would impact the government's share of profit gas, which rises to 85 per cent once the operator has recovered 2.5 times its investment. What's worrying is the lack of transparency: even the prime minister's economic advisory council has questioned the non-transparency in the estimation of investment in the KG basin block. Yet there has been no concrete action by the government.

"The government should not promote private interest at the cost of public interest," avers energy expert T.N.R. Rao. This truism does not sit well with the government silence on this issue. "We are not silent," Pandey says, pointing to the intervention to get the stay on the gas sale from KG basin lifted. Currently, in the "actual field condition there is a status quo (on the gas utilisation)", Pandey adds. Indeed, this is not expected to change in the next few years till Anil sets up gas-based power plants.

But for now, time is running out. The court has asked the brothers to renegotiate the terms of the agreement or for Anil to claim damages from his elder brother for not honouring the MOU. Amazingly, the HC verdict has left it to Kokilaben Ambani to help break the ice. Isn't it ironical that the government is nowhere in the picture?

I Become The Rabab