At 70-odd minutes it's a short film but not engrossing enough to make time fly. 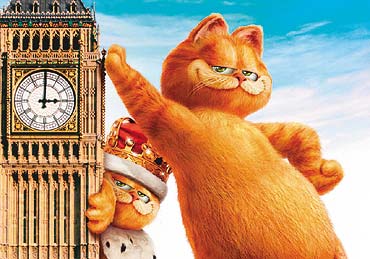 This one will remind you of our very own Seeta Aur Geeta, Ram Aur Shyam and Chaalbaz which, in turn, were inspired from the kids’ tale The Prince and the Pauper. Only here, instead of a human being, it’s our very own beloved fat slob of a cat who finds a doppelganger.

One is the pampered feline Prince, heir to the sprawling Carlisle Castle, off London, who is used to a life of luxury. The evil Lord Dargis wants to bump him off to take over the empire and he also wants to do away with the huge barnyard full of animals to make way for new-age condos and sauna. Prince’s lookalike is Garfield, the housecat from America who is happy with simple pleasures—cable TV and lasagna. Lasagna is not just a ‘dish’ for Garfield but a ‘state of life’, ‘the stuff of dreams’, ‘the food of God’. When his master Jon follows his girlfriend all the way to London, to propose to her, Garfield tags along on the sly with his canine sidekick, Odie. And then there’s a mix-up, a trading of places. Prince ‘becomes’ Garfield and discovers the wonderful taste of lasagna. Garfield, in turn, teaches the estate animals to cook a quick pasta. All ends well with a merry revenge of the estate’s barnyard animals on Dargis called ‘Operation Feline Protection’.

In this children’s tale, all the human characters have been caricaturised while the animals come alive with wit and vigour. The animated figures of the two cats have been rendered with a fine eye for detail. The film also scores in managing to impeccably merge these animated figures with live action making it all seem a very lifelike fantasy. The best part, however, is to hear the animals speak in clipped Brit accents. A few scenes are imaginatively done, like the animals learning to cook lasagna in the estate kitchen or Garfield and Prince seeing each other for the first time. There’s a nice play on British correctness as against the easy-going American way of life. But the humour is largely kiddish; quite a few jokes having to do with farting cats and peeing dogs. At 70-odd minutes it’s a short film but not engrossing enough to make time fly. Catch it with the kids.

Hollywood
1. Saw III
2. The Departed
3. The Prestige
4. Flags of Our Father
5. Open Season

Wax Is Not Wasted